EAST SPENCER — Longtime East Spencer Alderman John Noble plans to add another term to his record of 30 years on the town board as he runs for re-election.

Noble, who has been mayor pro tem three times, said he and other members of the board have begun a number of positive initiatives, but he’s not done yet. 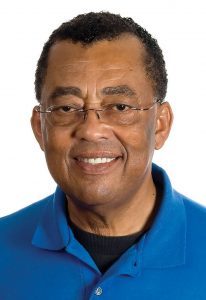 “I love East Spencer. Let’s work together to make it an even better place to live, work and play,” Noble said.

He is retired from the Rowan County Sheriff’s Office after 46 years, serving as a lieutenant supervisor in the courthouse division.

“We live in a great city where the crime rate is the lowest in Rowan County, including human trafficking …,” he said.

“I look forward to representing everyone in East Spencer fairly. I will continue to run a positive campaign, one in which I will display integrity and honesty in all my interactions and treat all that I encounter with the utmost respect,” Noble said.
He said the most important issue facing the community remains that residents pay too much for water, more than any other town in the county.
“I’ve worked with the board and Mayor (Barbara Mallett) to install a $1 million water line to improve the water system. It helped some, but not enough. I will strive harder to find other means to lower our cost,” he said.
Noble said he’s still working with the board to lower property taxes.
“We’ve made some improvements because it was once the highest in the county,” he said.
Noble said he feels he is the best candidate for the job because as a resident of East Spencer all of his life, “I share the same concerns of the residents.”
Noble said he initiated the city’s purchase of new firetrucks and equipment. In 2018, the town purchased a $428,000 firetruck because the department’s fleet was outdated.
Noble said he worked with the police and fire chiefs to get more officers on the streets and purchase new police cars and firetrucks.
He said he worked with the street department to clean up debris and abandoned vehicles.
“We are still working on a ‘face lift’ for our town,” he said.
Noble said East Spencer is growing and becoming more diverse as more people become homeowners.
He also has supported establishing the town’s splash park and other renovations at  Royal Giants Park.

“I am proud to report that I helped along with the mayor and the board to keep our budget stable with no current spending problems so that the level of services that the residents need are met,” he said.
He hopes that in another term on the board, he can initiate the following:

• Get youths more involved in town politics., such as shadowing local politicians.
• Initiate a program in which youths without a role model may shadow local business owners to learn a skill and hopefully get a job.
• Initiate a program to get more seniors involved in outreach as well as services that will benefit them.
• Work with the mayor and the board to build a mini-mall on Andrews Street near Interstate 85.
“This project will bring in more revenue and lower the tax rate for our citizens,” Noble said.
Noble has a bachelor of arts degree in criminal justice from Shaw University with more than 6,000 hours of training in law enforcement and supervision. He also has certifications in basic, intermediate and advanced law enforcement. He received the Martin Luther King Jr. Humanitarian Award and a law enforcement award in the 1990s.
He is a member of Kappa Alpa Psi fraternity, is on the N.C. Law Enforcement Officers board of directors, and is a member of Harold B. Jarrett Post 342 and Western Star Lodge No. 9. He has been a member of Shady Grove Baptist Church in East Spencer since he was 8.
Noble has two adult daughters, 10 grandchildren and two great-grandchildren.
In the Board of Aldermen election, Shawn Rush is making his first bid for political office. Alderman Curtis Cowan and Alderwoman Deloris High are running for re-election. Newcomers Travis Carter and Albert Smith are running to fill the unexpired term of Otis Gibson, who died last year while in office.
Mayor Barbara Mallett is running for re-election, facing a challenge from current Alderman Tony Hillian, who is in his first term on the board.
Contact reporter Shavonne Walker at 704-797-4253.
You Might Like