Mike Wilson: The dusty old stuff on my middle shelf 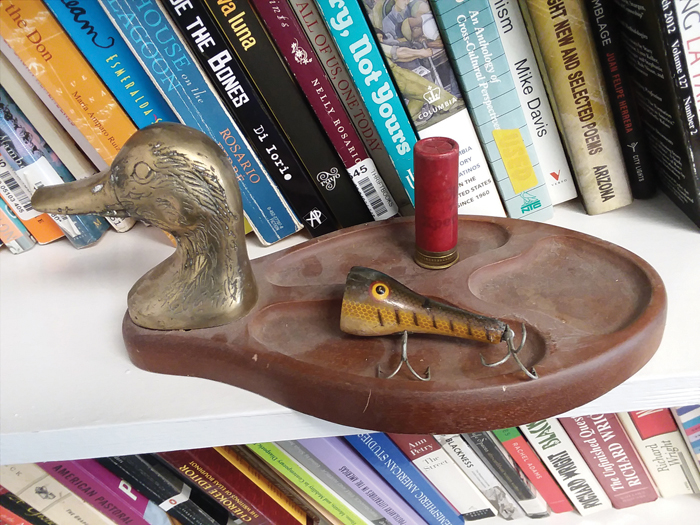 In my office at the college there is a large bookcase right behind my desk that houses four decades’ worth of accumulated books related mostly to my Spanish teaching. (The rest of my office is my poor interior designer daughter’s worst nightmare.)

Naturally, there are some books there I actually have never read, but who can resist an anthology of Russian poetry when it only costs a buck? (All lovers of reading will be familiar with this problem…)

On the top shelf there is a very old set of the complete works of Charles Dickens my sister once found at a garage sale; I must say The Pickwick Papers reminds me an awful lot of faculty meetings.

On the bottom shelf are the larger tomes, including the Oxford English Dictionary, the two-volume Real Academia dictionary, and over-sized picture books such as Spain: A History in Art. In the center of the middle shelf sits a “dresser valet tray” with a brass duck head on one end (one of many waterfowl items I have been given over the years) that invariably catches the eye of the students sitting across from me and laboring assiduously to avoid eye contact.

I see their foreheads crease and suspect they wonder why I have an old dark red shotgun shell and a chewed-up lure with two rusty treble hooks sitting on it.

Well, I guarantee you they would be the only two things I would grab on my way out the door if ever one of our annoying fire drills morphed into the real thing; I can get more diplomas any time.

The lure is a rather scarred-up Paw-Paw Popper made of balsa wood before the invention of injection-molded plastics, and coated with an apparently very durable enamel in a perch pattern.

When the time came for me to have my own tackle box when I was about 8, my granddaddy gave it to me with great ceremony out of his. I was just learning to cast instead of fish with a cane pole, which was just what an energetic boy needed instead of watching a red and white bobber all day.

I think I may now be able to approximate the number of times he patiently sculled the boat over to the bank with his little two-foot paddle (there were no trolling motors yet) to release that lure from the clutches of some bush, tree or stump since I have now been “payin’ for my raisin’” for several decades.

I caught my biggest bass—about six pounds—at the rock wall in Lick Creek with that lure, and just seeing it when I turn around to type sometimes brings a smile to my face.
The shotgun shell is a Western paper-hulled low brass 12 gauge quail load of #8 shot long since discontinued.

I found half a box while rummaging around in Granddaddy’s river cabin one day and showed them to him. He told me those were the shells he used “back in the day” when he hunted birds with his English Setter Joe around Madison County, Tennessee, before mechanized agriculture essentially wiped out all the places where they used to live and breed. When Joe died, he pondered long and hard over a replacement and ultimately just stuck the quail loads in the back of the closet and stopped. It was just too sad.

I found that box after his funeral and brought them home. I’m not really the collecting type; I am more an accumulator, if that is a word. Those two apparently insignificant items constitute a very portable and private museum of memories for only me, and I suppose I will still gaze at them and reminisce when I’ve cleaned out my office and I can no longer get outdoors.

What’s on your shelf?