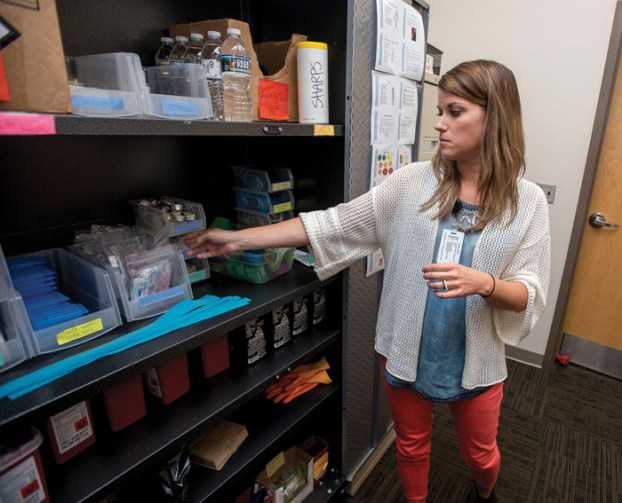 JON C. LAKEY/SALISBURY POST Kristin Klinglesmith, Substance Use Program Coordinator, explains the several items that are available for people looking for clean supplies. The Cabarrus Health Alliance operates a Syringe Exchange Program for people who inject drugs and are at risk of contracting viruses such as HIV or Hepatitis through sharing needles and drug-preparation equipment. Salisbury, NC 8/26/19

Darts and Laurels: Needle exchange program needed in Rowan, too

One goal of the program is to ensure the same needles aren’t used over and over by addicts and, in turn, increase chances of infection or disease. As former Editor Elizabeth Cook wrote in Sunday’s Post (“Syringe exchange aims to help abate opioid epidemic”), the program may seem as if its enabling addicts rather than helping them, but to users it’s a means of protecting themselves while they work to shake their addiction.

As Rowan County Public Health Director Nina Oliver put it, a sterile syringe exchange costs a fraction of the price tag for HIV/AIDS or hepatitis C treatment. Oliver said she’s supportive of having a syringe exchange program in Rowan County. The fact that a majority of participants in Cabarrus County’s program are from Rowan is one of many signs that there’s a need for such a program.

If county commissioners, Salisbury City Council members, other elected officials or, perhaps, the United Way are asked to help launch such a program, we hope the reception will be warm. The alternative is more of the same, and the fact that dozens of people continue to die every year from opioid overdoses in Rowan County, even as reversal drugs have helped lower the total, shows that the status quo isn’t working.

Dart to the proposal passed by the N.C. Senate last week that would shortchange state government of hundreds of millions of dollars.

The proposal — the taxpayer refund act — would give a maximum of $125 to people who filed a state tax return as individuals and a maximum of $250 to couples. That sounds good in theory.

We’re sure that taxpayers in Rowan would be happy with a few extra bucks in their pocket. But the proposal would sap the state of funding that could be spent on, among many other things, public education.

The N.C. Department of Transportation also said this month it would lay off hundreds of workers to help pay for other projects amid a shortage of funds. And, while the problem isn’t tied to a shortage of allocations from state government, the state could certainly step in.

Taxpayers likely would be OK with letting the state keep the money if it meant more money for public schools and helping out the N.C. DOT in a tight spot.

Laurel to the Trump administration for showing that championships won by girls aren’t any less worthy of recognition than those won by boys.

A staffer in the administration on Wednesday sent Coach Steve Yang an email invitation for the team to visit the White House as recognition for winning the Little League Softball World Series after Trump had previously invited the baseball champions to Washington on Twitter.

Regardless of what previous presidents have done, the Trump administration did the right thing in this case. And we look forward to a date being confirmed for Rowan Little League’s trip.