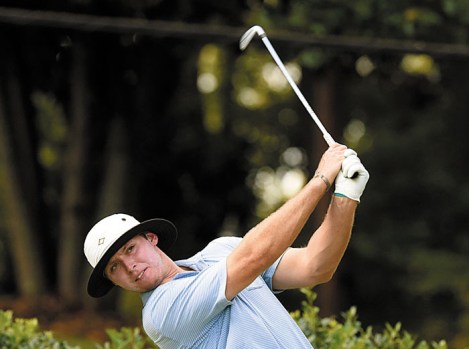 Trey Burton teeing off on 4th tee. photo by Wayne Hinshaw, for the Salisbury Post 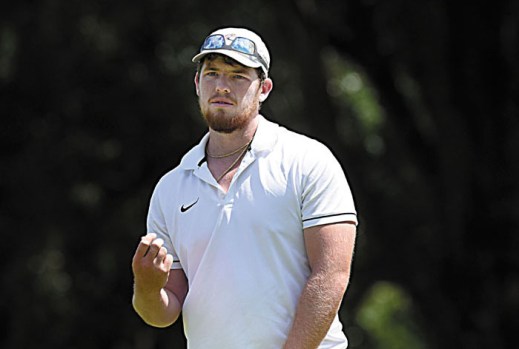 Tanner Bibey reacts to a missed putt on 2nd green. photo by Wayne Hinshaw, for the Salisbury Post 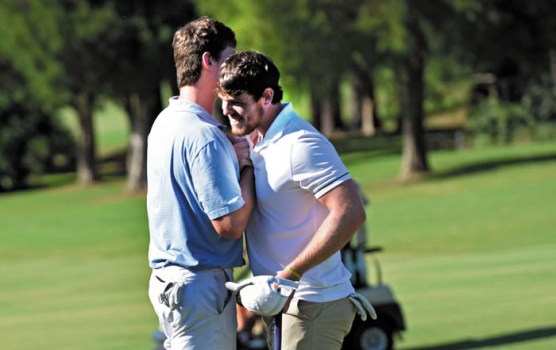 Winning teammates Trey Burton on the left and Tanner Bibey on the right shake hands at the end of the match. photo by Wayne Hinshaw, for the Salisbury Post 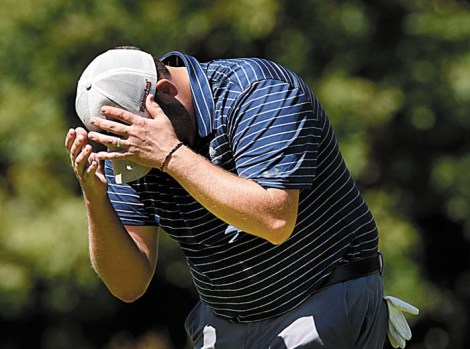 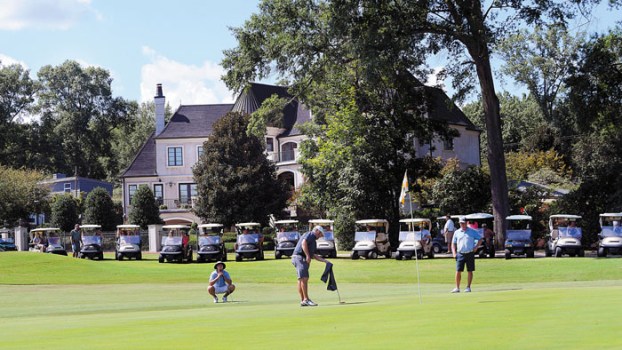 Many Fans in carts follow the champship match. This was on the 7th green. photo by Wayne Hinshaw, for the Salisbury Post 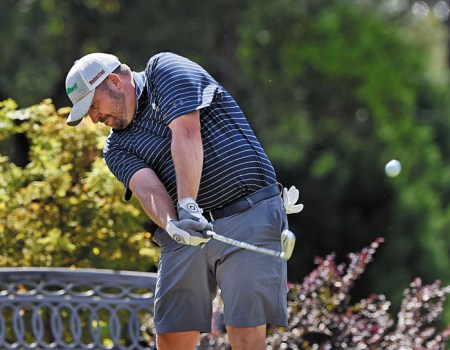 Justin Lefler teeing off on 6th tee. photo by Wayne Hinshaw, for the Salisbury Post

Tanner Bibey and Trey Burton claimed their first-ever title with an eagle on the 15th and final hole, wrapping up a 4 and 3 win over Justin Lefler and Jared Barnett. Bibey, a junior at Catawba and a native of Stokes County, hit a drive close to 400 yards on the par-5 15th then chipped to within six feet of the cup, setting the stage for his cinching eagle.

Lefler was conceded his Eagle putt from about the same distance on the hole, but by then, Bibey and Burton were already four up, with three to play in the match-play event.

“I would say we just played a little bit more freely this time,” Bibey said. “We just struck the ball better and came in with better attitudes.”

The winning duo was playing together in their second straight Labor Day tournament, but it was their first time in the 16-team championship flight.

“I was long off the tee, but just didn’t hit a lot of good putts,” said Burton, a Hickory native who wrapped up his Catawba golf career last spring. “But I definitely gave myself some good opportunities today and we were able to make a lot of pars.”

Bibey and Burton never lost a hole to Barnette and Lefler during the final match, as they halved 11 of the 15 holes played.

The winners took the lead on the par-4 third hole as Burton put his approach within two feet of the hole and made birdie. They expanded the margin to 2-up on the 7th when Bibey drained a 40-foot downhill birdie putt.

The tide turned for good on the par-4 12th hole, when Lefler and Barnette conceded a pair of birdie putts to Bibey and Burton, making it 3-up. Then on the par-3 14th hole, Burton secured a par while Barnette and Lefler both bogied, to make the score 4-up and the match dormie.

“Those guys played steady the whole time,” said Lefler, afterwards. “They kept it in the fairway, they hit the green in regulation, they made pars and they forced us to make birdies. We just didn’t make them. That is the bottom line.”

Lefler characterized himself and Barnette as a couple of weekend warriors out of Mt. Ulla. “We were happy to put up a good fight today,” Lefler said. “I would have liked to make a few more putts, but that is how it goes.”

Barnette was a bit more direct in explaining his team’s loss. “We just couldn’t make any putts this afternoon,“ he said. “That was the biggest difference.”

It was the first championship match appearance for Lefler and Barnette, although they have played several times together in the championship flight and were even qualifying medalists one year.

Earlier Monday morning in the semifinals, Barnette and Lefler had a bit easier time in a 4 and 3 win over the 2012 championship team of Ken Clarke and Chris Owen. The winning duo of Burton and Bibey had to battle all the way to the 18th hole to edge past Josh Brincefield and Charlie Barr, 1-up. Burton and Bibey led by two holes heading to No. 17, but Barr and Brincefield birdied to win the hole. A reasonable birdie try on No. 18 by Brincefield slid past the hole to end the match.

Bibey will now begin his junior golf season at Catawba next week with the team’s first fall tournament. Burton, meanwhile, plans to take a shot in the near future at playing golf professionally.

The 66th annual Labor Day tournament drew a strong field of 164 teams (328 golfers) in all flights and divisions this year, up 23 from last year and one of the largest turnouts in recent years. Golf Committee Chairman Jake Alexander credited the strong turnout to a recent highly successful membership drive at the Country Club of Salisbury. “We also had a lot of seniors and super seniors this year,” he said. “And that is a trend we expect to continue.”

In addition to the 16-team championship flight, this year’s tournament featured eight men’s open flights, three flights of men’s seniors (55-plus), one flight of men’s super-seniors (65-plus) and a strong eight-team field in the women’s division.

See the scoreboard (2B) page in today’s Salisbury Post for results from all divisions.