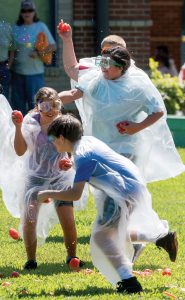 Jazmine Marlowe, left, Eli Loudin and Hailey Sanchez, are in the thick of it. Jon C. Lakey/Salisbury Post

“It has been a ball. The kids have had a blast,” said Jennifer Hunsucker, a Spanish teacher.

The tomato fight was held after school in the back of the school and was open to all West Rowan students and staff members. There were four rounds of about 15 children, with about 70 total who signed up.

“We had a bigger turnout than we thought. We weren’t sure how many kids would participate. However, there are kids that are out here who aren’t even students in our Spanish class,” Hunsucker said.

“We had about four rounds of about 15 children per group, and about 70 or so signed up for the event,” said Hunsucker.

Elizabeth Henley, a literary design coach, and Hunsucker worked together on the tomato fight. Hunsucker said the two aimed to provide students with the chance to donate to Rowan Helping Ministries as part of the school’s plan in Rowan-Salisbury Schools’ renewal status.

But there was also lots of excitement about the food fight.

And sixth-grader Zyrell Arnold said, “I’m looking forward to squishing the tomatoes and being able to throw them.”

Spanish students in Hunsucker’s class have had the opportunity to learn the history of “La Tomatina.” a tomato festival held every year in Buñol, Spain, through reading articles and holding class debates as to whether or not the tomatina event should continue in Spain.

Hunsucker decided to take it a step further by hosting a tomato fight. The tomatoes weren’t wasted food, though. Hunsucker said they were livestock-quality tomatoes donated by Patterson Farm of China Grove.

Participants had to pay to participate and to watch. Part of money is going to Rowan Helping Ministries.

The other portion is going to fund a “house” program in the Spanish class, Hunsucker said. Students are put into teams at the start of the year, with each team competing for points. They can earn points by showing good character and academic excellence, among other things.

“So every day, we’re earning house points, in and out of class,” Hunsucker said. “The winning house at the end of the nine weeks gets a reward.”

Hunsucker said her students made phone calls, created fliers and recruited friends for the fundraiser. The class also posted on West Rowan Middle School’s social media page to get the word out.

West Rowan students such as eighth-grader Alex Clement spoke about how much they enjoyed the tomato fight.

“I thought it was challenging. It reminded me of a snowball fight,” Clement said. “When you hit people with the tomatoes, it would explode kind of like snowballs.”

Seventh-grader Connor Kyles said he’s never been in a snowball fight, but the tomato fight reminded him of throwing sand at the beach.

Memories made: An end of an era as Intimidators play final game at stadium

KANNAPOLIS — After 25 seasons at the Moose Road stadium, fans of the Kannapolis Intimidators watched the team’s final game... read more