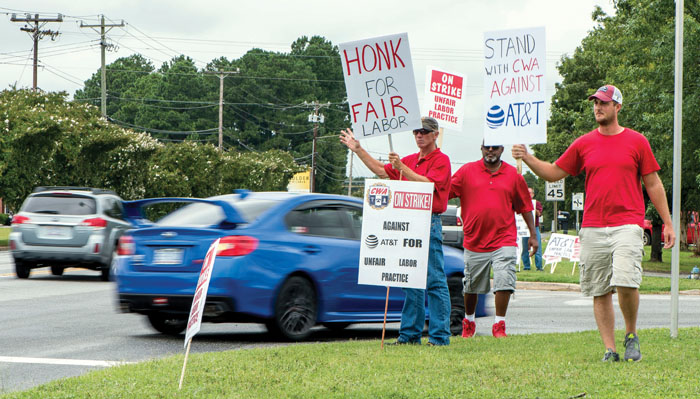 From left, Gregg Frazier, Lynwood Riley and Travis Fuller picket beside Jake Alexander Boulevard on Tuesday as part of the Communications Workers of America union's strike against AT&T during contract negotiations for workers in Southern states. Jon C. Lakey/Salisbury Post

Many drivers passing by on Jake Alexander Boulevard honked in support of the protesters.

More than 20,000 AT&T workers in nine Southern states went on strike over the weekend, saying the company isn’t bargaining in good faith on the new contract, the Associated Press reported. In addition to North Carolina, workers are on strike in Alabama, Florida, Georgia, Kentucky, Louisiana, Mississippi, South Carolina and Tennessee.

The Communications Workers of America union says AT&T isn’t sending negotiators who have the authority to make decisions.

The workers who have walked off are technicians and customer service representatives for AT&T’s “wireline” home and business internet and phone division, not its cellphone division, AP reported.

A spokesman for AT&T told the Post by email that the strike “is in no one’s best interest.”

“We remain ready to sit down with union leaders to negotiate a new, improved contract for our employees,” the statement said. “Our bargaining team is negotiating this contract with CWA leaders in the same way we have successfully done with other CWA contracts over the years. We listen, engage in substantive discussions and share proposals back and forth until we reach agreement.

The company said that’s why they’re surprised union leaders would call for a strike at this point, “particularly when we’re offering terms that would help our employees — some of whom average from $121,000 to $134,000 in total compensation — be even better off.”

The email said the company has reached 20 fair agreements since 2017 covering more than 89,000 employees, and the southeast contract covers fewer than 8% of AT&T employees.

“We’re prepared for a strike and will continue working hard to serve our customers,” the spokesman said.