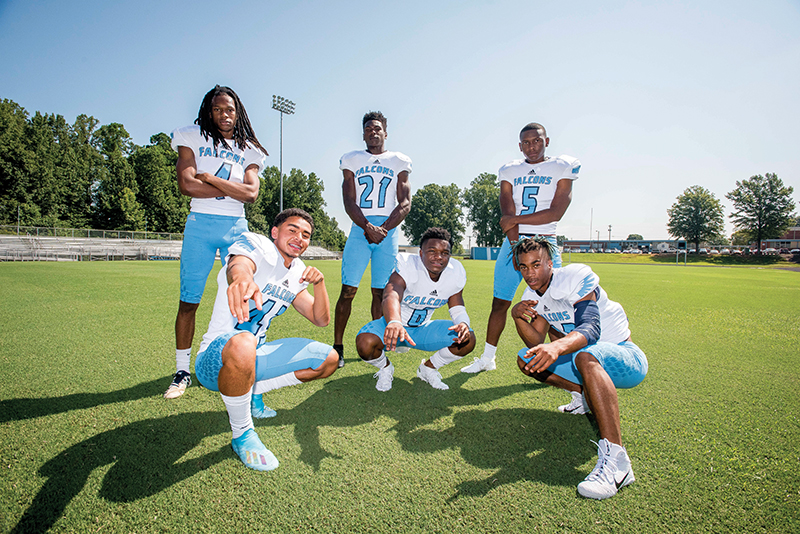 MOUNT ULLA — A year ago, West Rowan’s football team resembled an aspiring politician. It promised more than it delivered.

The Falcons split 12 games, went 3-2 in the rugged North Piedmont Conference and were exposed in a 34-0 first-round playoff loss to eventual 3A state semifinalist Kings Mountain.

“That was a really good team,” fifth-year coach Joe Nixon explained. “But every year at this time, you look back at the season before. Things didn’t go our way. A couple of breaks here and there and it could have been a whole lot different.”

That’s the expectation for 2019. West returns 23 seniors and 17 starters, including four lunch-bucket pillars on the all-important offensive line. Together, they helped produce 40 touchdowns from scrimmage last fall.

“Gotta feel good about that,” Nixon said. “Veterans up front and a tight-knit group. We’ve got guys who want to be offensive lineman. It’s not as easy as it looks, but these guys are hard workers and good at it.”

“Noah has done everything we’ve asked him to do,” said Nixon. “He’s a tough kid who, hopefully, will direct the offense for us. Only time will tell.”

Loeblein will have a couple of inviting targets in senior receivers Jalen Houston and Quay Weeks. Houston (5-8, 160) is a rocket booster in cleats who runs the 100-meter dash in less than 11 seconds. Last year, he contributed 904 yards receiving, 232 on the ground and ran back kicks like he’d been dipped in grease, finishing with 17 total touchdowns. A four-year letterman, he’s extremely dangerous with the ball and ready to go as soon as Nixon calls his number.

“He was Player of the Year in our conference,” the coach said. “We’ll move him around a little bit this year, just to keep it interesting. He’s got some personal goals he wants to meet and we have team goals we want him to reach. We know he doesn’t shy away from big moments in big games — and we expect that to carry on.”

Weeks (5-7, 160), now a third-year letterman, caught 15 passes for 213 yards and four touchdowns last season. Nixon says he works hard, runs precise patterns and has an uncanny knack for getting open.

“With four returning starters on the line, we hope to be a good offensive team,” Nixon said. “It’ll come down to how well and how often we get to run the football. Our goal is to run it when we want to.”

West will again employ a 4-2-5 defense, though it remains a work-in-progress. Eight starters return, headlined by all-county/all-NPC linebacker Baiden Suddarth (6-1, 195) — a three-year varsity player and the team’s leading tackler in 2018. He was in on 152 stops, intercepted one pass and recorded four sacks, upping his career total to 11.

“He’s a sideline-to-sideline player,” Nixon noted. “Baiden is everything you want in a linebacker.”

The defensive line features junior tackle Zeke Biggers and senior nose guard LeVontae Jacobs. Biggers (6-6, 325) is big, agile and fast, yet plays with military-grade discipline. Though often double-teamed, he was credited with 2.5 sacks a year ago. Jacobs (6-2, 245) is a returning starter and hands-down the Falcons’ strongest player. His 320 bench press rules the weight room.

West’s seasoned secondary hasn’t earned Nixon’s seal of approval, but it likely will. It’s led by senior DB Reggie Everhart (5-10, 185), a third-year starter who deflected 12 passes and picked off four last year. Senior TK Lark (6-1, 190) is long, disruptive and can lay the lumber, while senior Daniel Sell (5-10, 155) plays safety like a center-fielder who keeps his office clean. “He’s a natural,” Nixon said. “He’s got a knack for finding the football, always gets a good jump right off the bat.”

West’s roster also boasts the reigning Special Teams Player of the Year for both the county and the conference in senior kicker/punter Federico Cruz. He converted 33 of 37 extra-point attempts and kicked two field goals — including a 35-yarder in an overtime loss at South Iredell.

Throw it all in the blender and you get a West team that seems poised to contend for a conference title and perhaps more. Nixon’s chief concern, like many coaches, is finding depth at key positions.

“I don’t think we’re scaring anyone yet,” he said. “We’re taking steps in the right direction, but there are still a lot of question marks. We hope to put a good product on the field in Week 1. Our goals never change here. We want to win the county championship, the conference championship and play for a state title. At West Rowan, that’s the expectation.”

Playoffs: Lost 34-0 to Kings Mountain in 3A first round