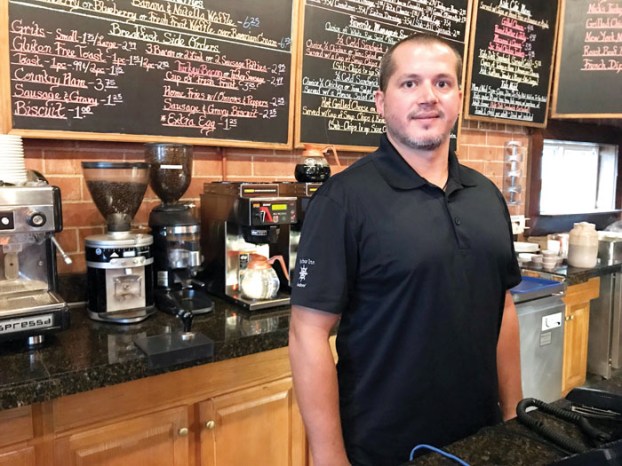 The well-known café is now owned by Marjel and Sevina Tania, who both are excited to call Rowan County home. It had previously been owned by the Georgiou family. The transfer occurred in June.

“I was living in Virginia, and I was looking for something breakfast, lunch and dinner in North Carolina. I have family here,” said Marjel Tania, new owner of Palms Café. “I’ve been looking to move down here for a couple of years.”

Marjel and his wife Sevina are originally from Albania and previously helped manage Harbor Inn Seafood in Roanoke, Virginia.

“It was brought to my attention that the previous owners Margaret and Nick were interested in selling and that’s where everything started,” Marjel said.

Marjel not only has experience working in the food industry from his adulthood but also childhood.

“As a family, food has always been as part of our tradition, my family even owned a mini-market,” he said.

Marjel is the youngest of three boys.

The café, located at 1609 West Innes St., is home to various salads, soups, sandwiches, wraps, burritos, smoothies, shakes, coffee, espresso, breakfast items and macaroni and cheese. The restaurant also caters and has a variety of desserts.

The Tanias said they have hopes of adding more items to the menu at the café and future plans for remodeling and renovations.

“We’re looking to complete renovations from the inside to the outside,” Marjel said.

The business owner doesn’t have a specific date set as to when, but he looks to complete remodeling updates in the next few years.

He said waiting for the lunch rush and being able to serve customers and the community are some of his favorite parts of restaurant ownership.

“Be persistent, be consistent, doesn’t happen overnight, just like every industry it takes time. It’s like a flower you’re trying to grow,” Marjel said when asked about his advice to aspiring entrepreneurs.

The café is able to host parties of up to 12 to 15 people and offers a 10% discount to all current Catawba College students who present their ID during purchase.

By Marny Hendrick sports@salisburypost.com SPENCER – It was one big dress rehearsal for all six local teams Friday night as... read more