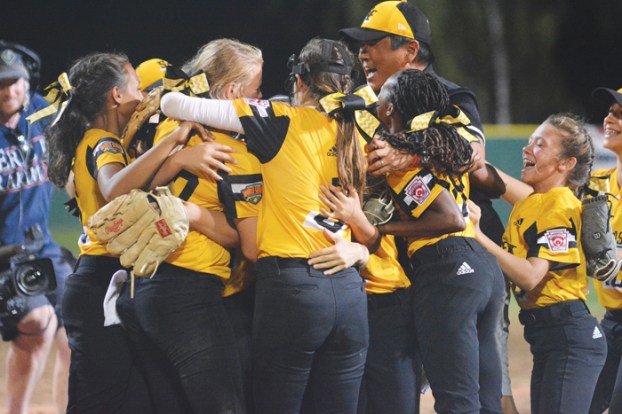 The Rowan squad celebrates in the pitcher’s circle moments after getting the final out in Wednesday’s 4-1 World Series championship win. David Ball Photography

Quotes of the Week: ‘Back to school as rock stars’

“These are 14 amazing girls. … They’ll go back to school as rock stars.”

— Steve Yang, a Salisbury dentist and coach of the Rowan County Little League softball team, which defeated Louisiana 4-1 on Wednesday night to claim its second title in four years in the sport’s World Series

“I think in order for society to evolve and move forward, we have to know where we came from.”

— Matthew Michael Brown, a volunteer at the Rowan Museum who turned out for the 200th anniversary celebration of the
museum-owned Utzman-Chambers House on Jackson Street

“You’re not just a member of one church in North Carolina. You’re a member of a broader community of believers. … Our core beliefs, our core Christian faith — we all believe the same things. Realizing that was pretty special.”

— Carter Woolly, a graduate of Salisbury High School and Lenoir-Rhyne University who spent a year on a mission trip to Rwanda
sponsored by the Lutheran Church

“This is how I love to spend my Saturday nights. I still love playing football. When I stop, I’m gonna get fat and sit at home in my La-Z-Boy.”

— Bobby Lee, a Freightliner employee who is a defensive tackle for the Carolina Thundering Herd, a semi-pro team in the Central Carolina Football League that plays at Catawba College’s Shuford Stadium

— Jeff Brown, a paramedic who works with Rowan County’s Post Overdose Response Team, whose goal is to help drug overdose victims
survive and move into recovery

“All we could do was fall in the water, and the captain said he would come get us if that happened.”

— Anne Hollifield, 76, who with fellow Oak Park Retirement residents Flo Starnes and Jean Hinckley went parasailing off the Outer Banks as part of a program to help residents check off items on their bucket lists

By Brenée Goforth Unless you are buying your marijuana from a dispensary in a state where it’s legal, you probably aren’t... read more