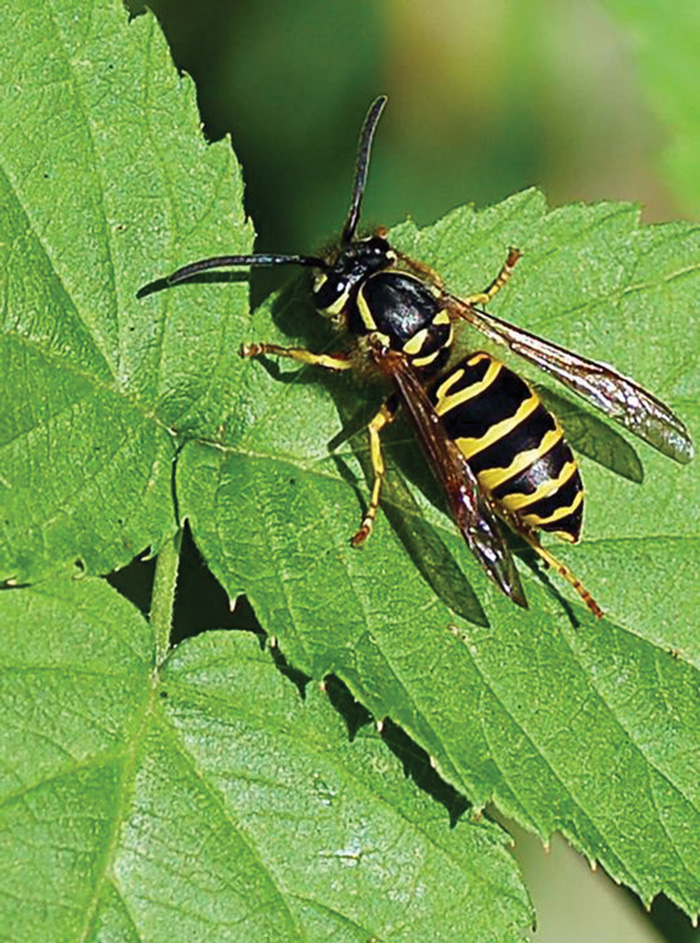 Submitted photo Yellow jackets are not enjoying the heat, either, and are causing problems.

Yellow jackets are active and causing problems for those working outside or trying to enjoy the outdoors. Hot weather we’re experiencing seems to make their presence even worse.

Yellow jackets, as small as they are, can deliver extremely painful and often deadly stings. Yellow jackets are like wasps or hornets, with the ability of delivering multiple stings. These insects control the amount of venom injected, so stings may differ in intensity. Some stings may only itch for a few hours while other stings may swell and be painful for days.

Yellow jackets are most active during the mid-day, foraging food and cellulose for the construction of the nest. Yellow jackets are somewhat beneficial since they feed on small adult insects and larvae for their source of protein. The insect’s source of carbohydrates is nectar and honeydew secreted by aphids, scales or other insects.

Closely related to wasps and hornets, these creatures choose to make their home in underground paper nests. Nests can also be found in flowerpots and other containers resting on the ground or the side of a building. The nests are abandoned each year in the fall. The combs were found vertically in loose soil like a fresh pancake.

Yellow jackets are agitated by excessive noise and vibrations. These creatures will defend their nests to the death against lawn mowers, weed trimmers, chain saws and other types of power equipment.

A few yellow jackets survive the winter as mature, fertilized queens. When the weather warms in the spring, the queen selects a nesting site and builds a single comb. Over-wintering queens forage for food and feed the first larvae while newly hatched workers enlarge the nest and tend the young, much as a colony of honeybees. Underground nests often develop into several layers of comb during the summer.

Future queens and males are produced for next year’s colony in late summer. After mating, the males die and the females seek a suitable site to over-winter. 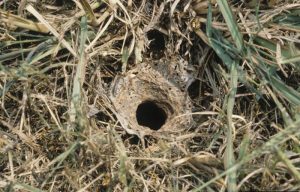 Submitted photo Yellow jacket nests are typically below ground, with small openings. They consist of a papery substance, much like wasps.

The entrance to the underground nest is a single hole or cavity about the size of a quarter. Workers  tirelessly migrate in and out of the single entrance during the day.

The best time to treat an underground nest of yellow jackets is late evening or early morning when the yellow jackets are quiet in the nest. Wasp and hornet sprays capable of delivering a straight stream of insecticides work best in destroying the insects’ nest.

Point the steady stream to the entrance hole and empty an entire canister of the insecticide into the entrance hole. Sprays that contain ether are effective and quick. Do not use gasoline or other petroleum produces as these are pollutants and will kill plants.

Cover the hole immediately to encapsulate the vapor, insuring a complete kill. Yellow jackets should be dead within 24 hours after an application of the aerosol insecticide.

More detailed information about yellow jackets can be found at https://content.ces.ncsu.edu/yellowjacket-in-turf