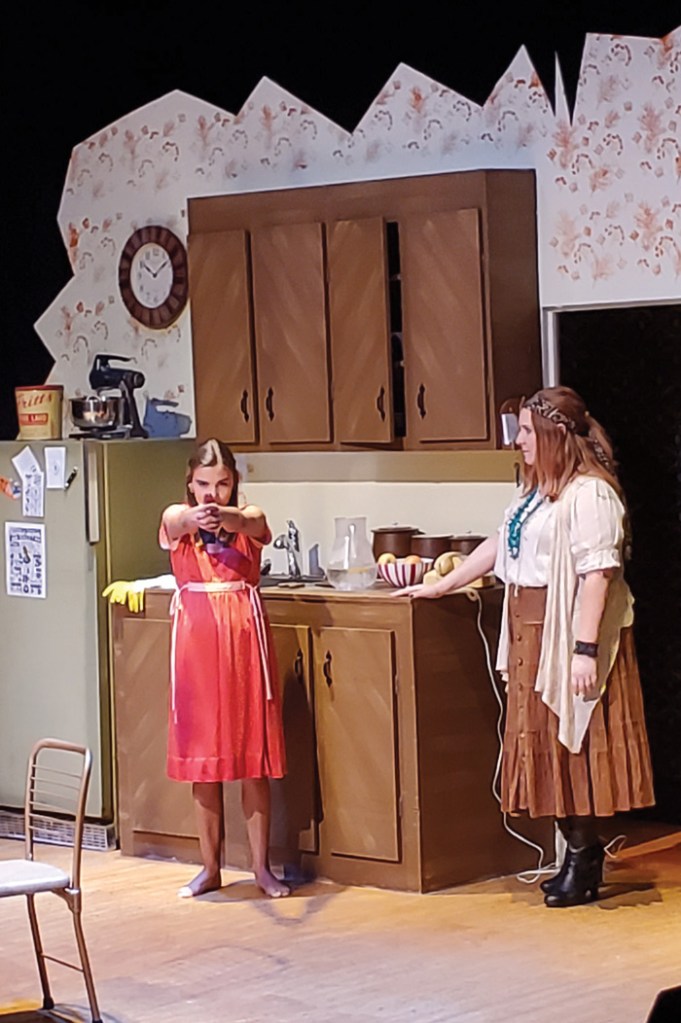 Lee Street theatre Krissey Browder, as Babe, left, shows Skyler Sanders as Meg how she aimed at her husband in 'Crimes of the Heart.'

The three women who are at the heart of “Crimes of the Heart” carry burdens most of us cannot even imagine.

And the three actresses who play those roles in Lee St. theatre’s production of the 1979 play embodied those troubled young women in sterling performances on patrons night.

Annie Boger as Lenny, the daughter left to care for Old Granddaddy, struck the right note of trapped caregiver, lonely young woman and the homebody who wants someone to notice her.

Skyler Sanders plays Meg, the wildly irresponsible sister who’s left Mississippi to become a singer in LA, only she hasn’t exactly fulfilled any of her dreams.

Krissey Browder is the youngest sister, Babe, who is in a heap of trouble so big it threatens to overwhelm all of them. Browder may have the toughest role of the three, and she handles it well, showing Babe’s range of emotions from elation to utter despair.

Cousin Chick, played with a mile-wide mean streak by Alison Proba, is the thorn in everyone’s side, a nasty, judgmental voice who repeatedly puts the sisters down.

Just two men are in the play, and their parts are tangential. Hoke Pittman is Doc, who used to have a thing with Meg, until he was injured in a hurricane and Meg disappeared to California. Pittman is tentative and careful. He’s no longer a doctor, but he still has a thing for Meg.

Maxwell Greger plays lawyer Barnette, who takes on Babe’s unusual case. He’s all brash and swagger, a good ol’ Southern boy who’s had an education elsewhere and is carrying a big chip on his shoulder.

The plot is nothing but trouble for these three girls. Lenny is celebrating her 30th birthday by herself, lonely and tired, Old Granddaddy in the hospital for a third month, and no one but her to watch over him. As if that’s not enough burden, she’s sent Meg a telegram to tell her about what their other sister has done.

And that’s a whopper. Babe, the youngest, shot her husband, a senator, in the stomach. He survives because she wasn’t a good enough shot to get him through the heart. She says she shot him because she didn’t like his looks. And that’s about all she’ll say.

When we find out the rest of the story, it’s deeply troubling.

Problem is, the best lawyer in town is the injured man, her husband, so they’ve got their work cut out for them.

Lenny hears from Doc that her beloved horse was struck by lightning the night before and killed, another reason to grieve.

And the audience learns that the girls’ mother hung herself, along with “that old yeller cat.” That was years ago, after their no-good daddy left them. Old Granddaddy takes them in, which angers Chick, who thinks the girls are just trash.

Meg returns, full of lies and bravado that hide another painful secret in the family. She’s brash and loud, smoking and drinking and pretending her life is great, while her career as a singer has ended before it began.

The more the audience learns about their lives, the more pathetic they become. Babe is having an affair that amounts to statutory rape in our times. Lenny has given up on life and takes every blow fully, coming across as sort of self-defeating.

Meg takes perverse pleasure in goading Lenny and making her cry. She always has. She says she doesn’t want to, but she falls back into the pattern again and again.

Boger, Sanders and Browder are so strong on stage that it’s obvious the play itself is dated. What was called female empowerment then is behavior that makes us uncomfortable now.

The acting is worth the price of admission. It can only get better as these three work together, because they already act like a family. You’ll feel for them even if their characters are not that likable.

As the story unfolds, the future looks pretty rocky for these women. They are damaged by their past in ways they don’t even understand. But they aim for one, brief happy moment together, realizing that’s all they can expect.

The play is just over two hours, and while there’s nothing truly offensive, it is not a play for young children, who will not understand the dynamics.