Memories made: Twenty-three years in the ticket booth 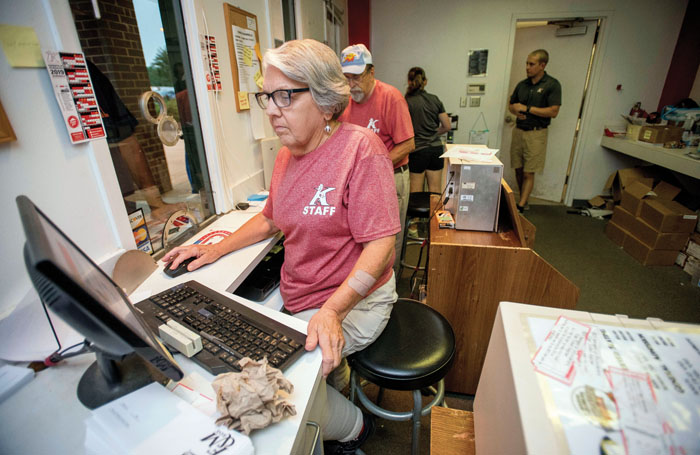 JON C. LAKEY/SALISBURY POST ... Denise Crosby, working in the ticket booth at Intimidators Stadium in Kannapolis, looks at her computer to find a fan the best seats available.

Editor’s note: This is the second in a series of stories on the Kannapolis Intimidators’ final season at the Moose Road stadium.

KANNAPOLIS — Denise Crosby has been on the job in the ticket office at Intimidators Stadium since 1996, making her one of the longest-serving employees there.

The Intimidators are closing out their last season at the Moose Road stadium on Aug. 29, and next year they will play at a new stadium in downtown Kannapolis.

Crosby remembers a minor league team coming to Kannapolis and the excitement for her and her sports-loving family.

“It was something new for Kannapolis, and most of us had never been to a minor league baseball game. All the newness, seeing the ball players — it was a big deal for Kannapolis,” Crosby said.

In the team’s second season, Crosby got a job in the ticket office.

“I just came out and got a job and haven’t stopped yet,” Crosby said.

Over the years, she has made “lots, lots, lots of memories.”

She recalls when the Intimidators won the national championship in 2005. It was a home game, and she got to go out on the field after the team won to take pictures.

“The excitement was like winning the World Series,” Crosby said. “Everybody was just so excited.”

She has been to spring training in Arizona several times, and at every game she would recognize at least one player who was once with the Intimidators.

She has seen fans grow up and coaches come back to watch their former players. She has seen players come back with their wives and kids, and others move up to the major leagues — what she calls the “big team.”

“If it hadn’t been for this venue, I would have never,” Crosby said. “I get excited just like a parent would when I find out that one of the players went to the big team.”

She said the staff gets close to some players, and she will continue to follow them as they progress in their baseball careers.

“They want to be part of what you have to offer here,” Crosby said. “It’s always fun to see the ones that go to the big team. I can say, ‘He played in Kannapolis.’ Even if it’s not with the White Sox, they’re on another team.”

Crosby has been keeping up with the new ballpark, especially because she didn’t watch the Moose Road stadium go up. She drives by the site every day to get to her day job.

“I didn’t watch this one closely because I didn’t live close to here,” Crosby said. “I could not envision what they were putting up and how it was going to be. It’s for real now.”

The site of the new stadium is special for Crosby because it is the Cannon Mills property where she had worked as a weaver when she was 16.

She has mixed feelings, though, about the last season on Moose Road.

“It’s sad because we have been here for so long,” Crosby said. “I’m excited about the new ballpark. It’s kind of like leaving home. There’s so many memories. You know, because I made a lot of friends out here. We’ve had a lot of people come through this ticketing office.”

The Intimidators have a special place in her heart, she says. Even on her days off, she still comes to watch them play.

She hopes the Aug. 29 game will have a great turnout. Fans will be able to find her in the ticket office, wearing her baseball earrings and occasionally checking the score in between selling tickets.

“I’ll be out here working, and I’ll go out and celebrate,” Crosby said. “I hope we win.”