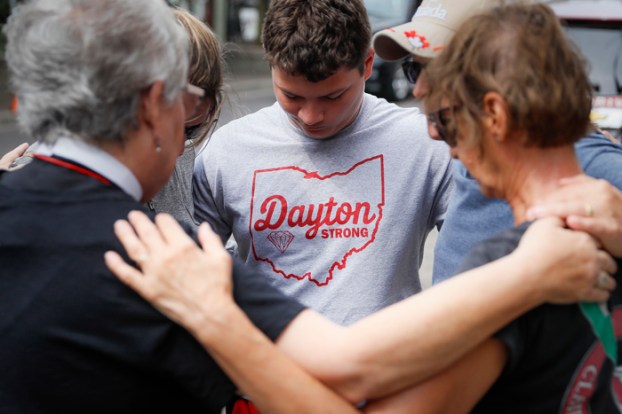 Mourners gather and share a pray near a makeshift memorial on Tuesday for the slain and injured in the Oregon District after a mass shooting that occurred early Sunday morning, in Dayton. John Minchillo/Associated Press

Cokie and Steven Roberts: No one pulls the trigger alone

After the tragic attacks in El Paso and Dayton, the country should be having two debates: one about gun control, the other about speech control. It’s not enough to know how assailants use firearms. We have to know why they are used.

In a brief speech, President Donald Trump said that “mental illness and hatred pulls the trigger, not the gun.” And while there’s some truth to that, he completely avoided his own pernicious role in hardening that hatred and aggravating the aggressive tendencies of deranged individuals.

“If you laid that speech next to videos of his rallies, it’s mind-boggling,” David Axelrod, senior adviser to President Barack Obama, told The Washington Post. “He said what you’d want the president to say. The problem is that in real life, he’s a provocateur, not a healer, and his whole political project depends on those provocations.”

Trump largely avoided another critical factor in explaining what moves people to violence: the growing role of the internet as instigator and incubator of hate speech in general and white nationalism in particular. The so-called “loners” who seem to commit so many of the worst hate crimes are not “loners” at all on the web, but card-carrying members of an online global community that encourages and enables each other’s darkest impulses.

“The internet is now the place where the seeds of extremism are planted and watered … where people with hateful and violent beliefs can find and feed off one another,” writes Kevin Roose, technology columnist at The New York Times.

Regulating guns is a lot easier than regulating speech. The right to own a gun does not include the right to harm other people, and the public clearly understands that. A recent Quinnipiac poll found that 73% of respondents agree that “more needs to be done to address gun violence.” An NPR survey reports that 9 in 10 favor stricter background checks for gun buyers and 6 in 10 support a ban on assault weapons.

Congress fails to pass these eminently sensible reforms for only one reason: the inordinate power of the gun lobby. But these reforms are clearly needed and legally sound.

Policing hate speech is a far more complex problem. Unlike many other countries, the U.S. has a robust tradition of tolerating even the most odious and offensive forms of expression, and we should be proud of that principle. The guns used by the El Paso shooter were a far more tangible threat to public safety than the incoherent manifesto he posted on the scurrilous website 8chan.

No rights are absolute. You cannot use your gun to shoot innocent people, and you cannot use your words to incite violence. But drawing the line between permissible and prohibited speech is excruciatingly difficult. And passing laws that empower the government to define that boundary is almost certainly a bad idea.

That leaves voluntary action as the best solution, and the recent dilemma of one internet company, Cloudflare, shows both the possibilities and the problems of private decision-making. Cloudflare is a technology company providing security for internet platforms, including 8chan, a “cesspool of hate” in the words of Cloudflare’s CEO, Matthew Prince.

After the El Paso murders, Cloudflare came under intense pressure to abandon 8chan as a customer, a move that would have forced the website offline, at least temporarily. But the company waffled. “It’s dangerous for infrastructure companies to be making what are editorial decisions,” Prince told the Times, echoing the concerns of Facebook, YouTube and many other online outlets.

Then he changed his mind and terminated 8chan’s contract. “The rationale is simple: They have proven themselves to be lawless, and that lawlessness has caused multiple tragic deaths,” Prince said in a statement. But he remains conflicted. “We continue to feel incredibly uncomfortable about playing the role of content arbiter,” he added.

Prince was correct to ban 8chan, and also correct to feel “incredibly uncomfortable” in doing so. A critical conversation is just beginning: Who gets to define the limits of free speech? What standards should they use? Is it possible in this digital age to reconcile two profound American values: the right to speak free of restraint and the right to live free of peril?

What’s not in question is the vital, virulent role of the president in making the problem worse, not better. If the internet is where “the seeds of extremism are planted and watered,” Trump’s tantrums give those toxic tendrils oxygen and fertilizer. No one pulls the trigger alone.

Quotes of the Week: ‘He blessed me with a kidney …’

“It’s kinda cool to see the community come together and hang out. It builds a good bond.” — Garrett Henson,... read more

RCCC named school on the rise

Conversations get started on planning for diversity mural, street painting