Benson bought a home in the city a month ago. And, Benson says, he is excited to be in Salisbury and have a new start for him and his 4-year-old son. He wants an environment where his kid can be a part of the community and be safe.

“We shouldn’t be fearful of letting our kids out to play,” Benson said. 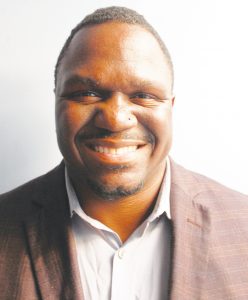 Benson, 33, says he would listen to the youths because he knows their issues and struggles are different from his experiences.

“Kids have struggles that I didn’t have,” Benson said.

As a newcomer to Salisbury, he has been learning about the city through conversations with other residents. He plans to show up at community events so voters will know who he is and what he’s about.

He grew up in Concord and earned a master’s degree at Hood Theological Seminary. He was attracted to Salisbury and decided to build his family’s life in the city. Benson said he appreciates the lower cost of living and being able to have a yard. He also knew that local residents were the kind of people he wanted his son to be surrounded by as he grows up.

Benson said some of the most meaningful conversations he’s had were with fellow members of the Poor People’s Campaign. Those conversations touched his heart.

“Those stories are about my commitment,” Benson said.

Economic development is not just creating more jobs in Salisbury but ensuring a living wage.

He is focused on being justice-oriented and says some voices aren’t being heard.

He doesn’t think the community can move forward without discussing the history of Salisbury and its recent tensions. He says these conversations must be had.

And Benson said he would like to look into how the police respond to incidents. He said the whole community is affected when violence is focused on particular groups.

“Violence is focused on poor, black and brown,” he said.

He said violence is concentrated in certain geographic locations and city leaders should dig deeper into the roots of the problems those communities have.

Cycles of violence continue if that doesn’t happen, Benson said.

“My commitment is to co-create a community for healing, justice and a place that we can be safe,” Benson said.