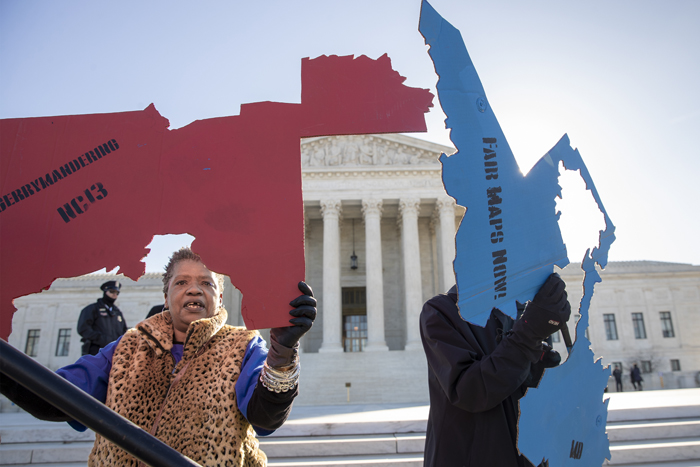 Activists at the Supreme Court in March opposed to partisan gerrymandering hold up representations of congressional districts from North Carolina, left, and Maryland, right, as justices hear arguments about the practice of political parties manipulating the boundary of a congressional district to unfairly benefit one party over another. Carolyn Kaster/Associated Press

Judges in the Common Cause v. Lewis election redistricting trial must answer a relatively simple question: Does the N.C. Constitution limit partisan gerrymandering?

Two weeks of argument and counterargument in the case often obscured that question. Rather than point to provisions within the state constitution that provided an answer, lawyers on both sides seemed fixated on other issues. They spent most of their time either trumpeting or trashing expert analysis of North Carolina’s legislative election maps.

The bottom line for the plaintiffs’ experts: Republican legislators drew maps designed to elect as many Republicans as possible to the state House and Senate. The defendants’ response: The state constitution and previous court rulings dictated most of the maps’ details. Those two factors placed significant limits on mapmakers with partisan intent.

Even if both sides are correct, neither answers the original question.

Before delving into the issue further, it’s important to distinguish electoral redistricting that involves partisan factors from redistricting that overemphasizes race. North Carolina can point to piles of election maps over previous decades — drawn by Democrats and Republicans — that courts have rejected because of concerns about racial gerrymandering.

Our current state House and Senate maps — and the congressional map — all result from previous court cases. Federal courts tossed earlier versions of all three maps because of concerns about race. But no court has disqualified maps used in 2018 elections because of racial gerrymandering.

In addition to surviving scrutiny on racial grounds, the current congressional map also has emerged unscathed from a partisan gerrymandering challenge. That was the point of a high-profile June ruling from the U.S. Supreme Court. Justices decided, 5-4, that federal courts would no longer wade into the debate about how much partisanship is too much for electoral mapmakers.

The high court shut the door on federal partisan gerrymandering cases. A key reason: The U.S. Constitution is silent on the issue. There’s no standard federal judges can employ to gauge how much partisanship is too much. It’s a political decision best left to political actors.

The Supreme Court did not block state courts from further consideration of partisan gerrymandering. But state judges face a familiar challenge: finding a clear legal standard to guide lawmakers about the use or misuse of partisan factors when drawing election lines.

Plaintiffs in Common Cause contend the N.C. Constitution offers more protection than the U.S. Constitution against partisan gerrymandering. Their original complaint cites equal protection guarantees and the state constitution’s provision for free elections, as well as provisions guaranteeing the rights of free speech and free association.

But none of those rights tells a judge how much partisanship in electoral mapmaking is too much. Two weeks of testimony did little to fill in the gaps between constitutional provisions and their real-world application.

The N.C. Supreme Court already has permitted some degree of partisanship in mapmaking, according to defense attorney Phil Strach. He cites the 2002 state redistricting case, Stephenson v. Bartlett.

“In the Stephenson case, the North Carolina Supreme Court expressly allowed this,” Strach told the three-judge panel contemplating the Common Cause case. “It said the legislature may consider partisan advantage and incumbency protection in the application of its discretionary redistricting decisions. This question has been put to rest a long time ago.”

While bombarding the three-judge panel in Common Cause v. Lewis with reams of paperwork and hours of testimony about extreme partisanship embedded within North Carolina’s election maps, the plaintiffs’ attorneys did not talk about a dividing line separating the acceptable from the unacceptable.

That’s no surprise to Strach. “The plaintiffs won’t give the court any help in finding a standard by which to judge their incoherent theories,” Strach said as the trial opened. “When is a district too competitive, or not enough? Is there a point at which the permissible use of partisan advantage — allowed by the state Supreme Court — has veered somehow into something impermissible?”

“Plaintiffs will not even attempt to give the court any standard that answers any of these questions,” Strach added. “If the 2017 maps are supposedly a partisan outlier, where is the line between a map that is not an outlier and one that is?”

Strach noted the omission of legal standards from the expert testimony. “They don’t know the answer to the question because it’s a question that is unanswerable,” he said. “How do you legally judge voters’ voting preferences? How do you know what is a fair map politically? There is no way to know what a fair map looks like. The only way that you can do that is to impose by judicial fiat some notion of fairness.”

It does seem odd that two weeks of testimony did nothing to point the three-judge panel in Common Cause v. Lewis toward a judicially manageable standard. They would need to employ such a standard to distinguish a constitutional degree of partisan mapmaking from the unconstitutional.

Perhaps they’ll take note of that omission as they ponder their verdict.