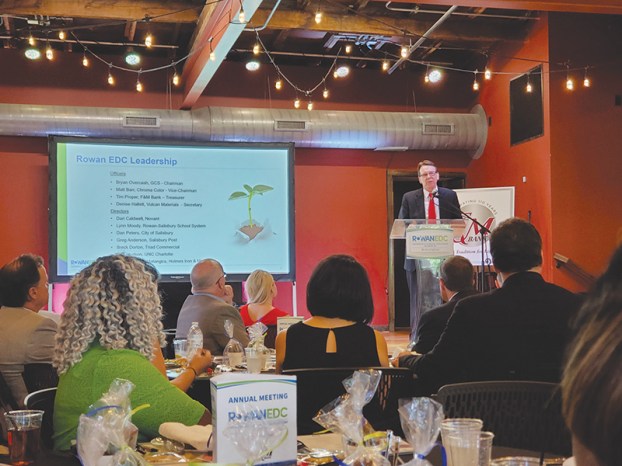 SALISBURY — What if Rowan had the best performing economy among counties in the state?

What if it was growing the fastest, had the best educational attainment and had one of the lowest poverty rates?

Rowan County Economic Development Commission President Rod Crider on Thursday asked those in the crowd at the organization’s inaugural annual meeting if they had ever considered those possibilities.

“Do you think that would have a profound impact on our community, on our schools, on our governments, on our businesses who operate here and on our social service agencies?” Crider asked. “I think it would have a huge impact on the way that we do things here in Rowan County. And I think we have all the ingredients to get there.”

And while Crider said that all members of the community are working to move the county forward, he said that he isn’t sure everyone has a shared vision.

“While all of us are working toward economic development and the economic improvement of this community and its residents, I’m not sure we all have the same goal,” he said.

And that’s why the EDC is working to unveil a vision that creates a more holistic view of economic development.

That vision will move the EDC beyond its traditional role of business recruitment and retention, he said, taking into account principles of reducing poverty, increasing prosperity and raising incomes among people who live here as well as improving the quality of life.

As it turns out, paddling in the same direction and aiming for the same goals are important traits that site selectors look for when deciding which communities would make good locations for their clients, said Ron Starner, executive vice president of Conway Data Inc. and Site Selection magazine, who was the keynote speaker for Thursday’s meeting.

Politics and lack of responsiveness are the top deal-killers in economic development, Starner said.

“That’s why I was encouraged when folks were talking about alignment,” he said. “I would submit to you that alignment of all of the key organizations and at every level of government is the single most important thing you can do to develop a good reputation.

“Because if you’re not aligned … site selectors and company executives are going to discover that sooner or later. They’re going to find that out. And it will not only undo a deal, but it’s going to damage your reputation.”

Just as communities should avoid developing a bad reputation, Starner advised Rowan County not to become a community with no reputation.

“I would submit to you that on the topic of corporate site selection and business facility locations, your reputation is everything. … Without a reputation that precedes you, you really have nothing,” he said.

In advance of his talk, Starner said he polled site selectors about Rowan County. And judging by those comments, Rowan’s reputation includes that it has one of the best economic development professionals in the nation in Crider; good transportation infrastructure; being close to larger cities; and being in a prime location for manufacturing and distribution projects.

“This area wants to grow and offers a lower-cost location than Charlotte or Greensboro. Nice quality of life, which may be helpful in recruiting workforce talent,” one consultant said.

Starner encouraged Rowan County to double down on its primary industries that make products locally, such as Freightliner, rather than trying to recruit national chains that might not keep money locally.

In addition to hearing from Starner on Thursday, the Economic Development Commission also presented its new “Rowan Rockstar Awards” to the Rowan County commissioners as a group and Chairman Greg Edds individually as well as Bryan Mewhort of Agility Fuel Solutions.

EAST SPENCER — Two vehicles collided into the back of a Rowan-Salisbury Schools bus Wednesday afternoon at the intersection of... read more

US hiring slows amid signs of longer-lasting economic damage