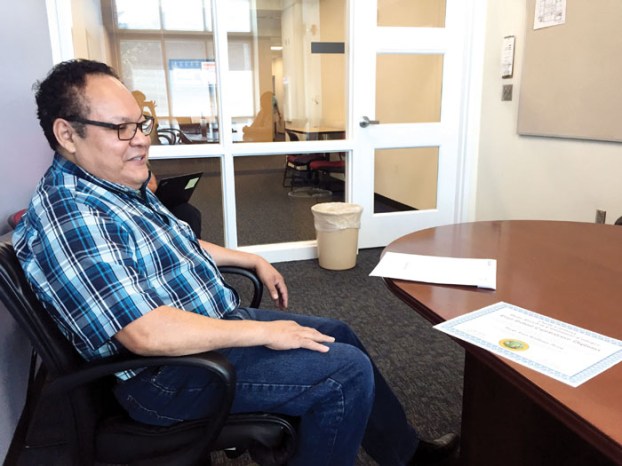 Jorge Saldana is the type of man who rarely thinks about himself.

The attribute becomes apparent as he sits, speaking with quiet humility on the grounds of Rowan-Cabarrus Community College. Phrases like “it was a little bit harder” or “I did it to help my family” flow effortlessly and without resentment as he shares his story.

Said story echoes the journeys faced by millions across the world: a journey away from high school stemming from necessity rather than want.

But after 52 years putting the needs of others first, Saldana is finally treating himself. Recently, he completed Rowan-Cabarrus Community College’s English as a Second Language program, and — in July — he finally earned his GED.

“Like many people, I wanted to earn more money and to help my family,” he said. “My daddy was old and sick, so I had to quit school and go to work.”

“I wanted my brothers to have the opportunity to study,” he said, detailing the struggle for a secondary education during his adolescence. At the time, he said, high schools lacked free public transportation like buses, school materials were scarce and the costs of schoolbooks unsurmountable.

“I quit high school because I only had money for one school book,” said Saldana. “There were seven required.”

But even as he ventured away from school and into the working world, an innate desire for learning never left him. He recalled listening to retired, English-speaking people summering in his home town.

“These people used to listen to music in English,” he said. “I always wanted to know what they were singing.”

When his relocation to the United States in 2002 failed to deliver this desired learning in his position serving and working in a retail space with a Spanish-speaking population, he was easily enticed by Rowan-Cabarrus’ English as a Second Language program.

His educational experience would not stop at these six courses.

“When I finished, I told (my instructor) I wanted to keep coming and learn more English,” said Saldana. “But he said ESL was only very basic English, I couldn’t learn any more.”

Instead, Rowan-Cabarrus staff members pointed him to the college’s high school equivalency program, a course of study that Saldana stepped into ready for and accepting challenge.

“I knew I could make the GED in Spanish, but I wanted to do it in English,” he said. “… It wasn’t easy because it wasn’t my first language, but I had a lot of help.”

This help came from the course’s instructors, he said, who were always close by and ready to help Saldana translate as needed — though at test time, he was all on his own.

When he passed all GED-required tests, Saldana said he felt a mixture of emotions: “I was happy, but I was also a little bit sad because I wanted to learn more English.”

The accomplishment comes after a life dedicated to supporting others: his dedication to his brothers’ education has seen one reach the highest of his high school class and move on to attain a master’s in engineering.

And the studies in English have already helped his day-to-day life, said Saldana. He’s able to communicate with a growing number of English-speaking customers at his job, providing better service therein, he said.

State law says Landis’ Porter would have to choose: police officer or alderman

LANDIS — When Buddy Porter Jr. filed as a candidate for Landis alderman on July 9, he didn’t know that,... read more