An shoots 66 for 1-stroke lead at Wyndham Championship 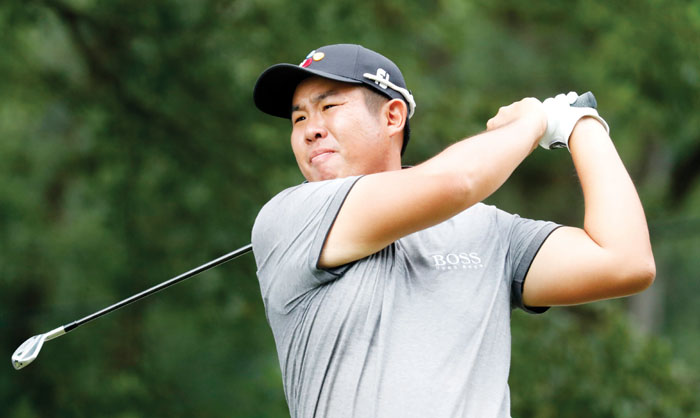 Byeong Hun An watches his tee shot on the fourth hole hole during the third round of the Wyndham Championship golf tournament at Sedgefield Country Club in Greensboro, N.C. Saturday, Aug. 3, 2019. (AP Photo/Chris Seward)

GREENSBORO (AP) — The rounds are starting to repeat for Byeong Hun An: No bogeys, a bunch of birdies and more time atop the Wyndham Championship leaderboard.

An shot a 4-under 66 on Saturday for a one-stroke lead after three rounds at the PGA Tour’s final event before the playoffs.

An, who was at 17-under 193, has held or shared the lead after each of the first three rounds and has yet to play a hole worse than par. The 27-year-old South Korean with three international victories has put himself in position to claim his first win on tour.

“It feels similar to yesterday, to be fair,” An said. “I had some nice shots here and there, but scrambled well today. Another bogey-free (round). I’m quite happy with it — a 66 out here, and I have a lead.”

Former Wyndham winner Webb Simpson and Brice Garnett were tied for second, with Simpson shooting a 65 and Garnett a 66. Ryan Armour was 15 under following a 65.

“One shot is basically nothing,” An said. “It’s not that big of a lead. It’s just one shot.”

Overall, it was yet another low-scoring day at Sedgefield Country Club. For a while midway through An’s round, six players were tied for the lead at 13 under.

“I wouldn’t be surprised if somebody shot 8, 9, 10 under, a guy who’s within striking distance,” Simpson said. “I’ve got to keep the pedal down, and if I don’t shoot a low one, I’m not going to win.”

An started to get some separation from the crowd with three birdies in the four-hole span from Nos. 5-8, moving to 16 under.

Then came his best shot of the day, a 50-foot birdie putt on the par-4 14th. He closed with four straight pars.

Simpson — a native North Carolinian who named his daughter Wyndham after his first career victory came here in 2011 — strung together three birdies around a bogey midway through his back nine to move to 16 under.

If nothing else, he’s in good position to claim his fifth top-10 finish in six years at this tournament.

Garnett made the turn at 15 under following back-to-back birdies, then rolled in a 30-foot birdie putt on the 17th to pull even with Simpson and saved par on the 18th after rolling his third shot from a greenside bunker to within 3 feet from the flagstick.

“I was just trying to get the putt (on 17) somewhere around the hole,” Garnett said. “Fortunately, the putt had some eyes and drifted in. Huge momentum going into tomorrow.”

Armour climbed into contention with six birdies in a 10-hole stretch midway through his round that put him two strokes back.

And Viktor Hovland finished his season-best round with a birdie on the 18th after landing his 150-yard approach shot some 3 feet from the flagstick. He was tied for fifth with J.T. Poston and Paul Casey at 14 under.

After winning the U.S. Amateur last year, Hovland turned pro two months ago after tying for 12th at the U.S. Open.

“I just try to tell myself that I don’t have anything to lose,” Hovland said. “I’ll be on the Korn Ferry Tour no matter what happens kind of unless I play really well tomorrow, and to be in the spot where I am right now after college, that’s a pretty good spot to be in.”

MILTON KEYNES, England (AP) — Hinako Shibuno’s dream debut continued Saturday in the Women’s British Open when she shot a 5-under 67 to take a two-stroke lead into the final round.

The 20-year-old Shibuno, a rookie on the Japan LPGA Tour who is making her LPGA Tour and major championship debut, birdied six of the final holes in the round to get to 14-under 202.

“It’s definitely exceeding my expectations,” said Shibuno, nicknamed Smiling Cinderella. “I came in wanting to make the cut, so right now I feel like I’m doing something very incredible.”

Overnight leader Ashleigh Buhai started with a three-shot lead at Woburn Golf Club and stretched it to five when Shibuno bogeyed Nos. 5 and 9.

“I was pretty upset after the three-putt bogey on the ninth,” Shibuno said. “But after the second shot on the 10th hole, I was able to bring myself back.”

Buhai stumbled with three bogeys in five holes. The 30-year-old South African, who has never won on the LPGA Tour, had a 72 to drop to second at 12 under.

“I played my first nine holes probably the best ball-striking I could have had. Hit really good shots,” Buhai said. “Turned 2 under, birdied my 10th to go to 3- nder and hit two poor wedge shots on 11 and 12, normally my strong point. Let the three-putt rattle me on No. 12.

“I’m still here, two shots behind going into the final round playing in the final group. If you told me at the beginning of the week, I would have taken it.”

Second-ranked Sung Hyun Park was another shot back after a bogey-free 68.

Top-ranked Jin Young Ko and Americans Morgan Pressel and Lizette Salas were tied for fourth on 10 under. Ko (68) is seeking her third major title of the year after winning the Evian Championship last week in France. Pressel had a 66 and Salas shot 70.

Defending champion Georgia Hall was 10 shots back after a 74.

Chase Elliott returns to The Glen looking to repeat