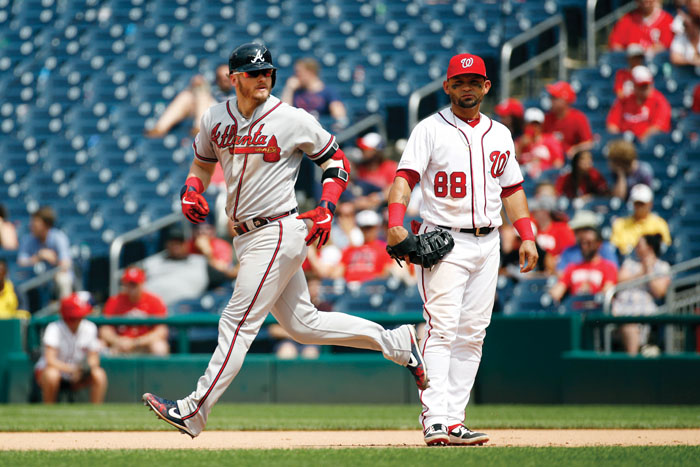 Donaldson homered against Sean Doolittle in the top of the 10th inning, and the Braves pulled out a 5-4 victory over the Washington Nationals on Wednesday to take two of three in the series and pad their division lead to 6½ games.

“It felt good,” Donaldson said. “You know, 0-for-4 with two (strikeouts) before that. I was able to put a good swing together and help our team win the game.”

After the Nationals scored twice in the bottom of the ninth to tie the game, Donaldson swatted a fastball from Doolittle (6-3) over the center-field wall for his 25th homer of the season.

“I know what he features,” Donaldson said of the Washington closer and his former teammate on the Oakland A’s. “He had gotten me out two times before that. Today, it was my turn.”

Shortly after Donaldson homered, the Braves bolstered their roster with a pair of trades just before the 4 p.m. deadline, acquiring relievers Shane Greene and Mark Melancon.

“Shane Greene has a 1.00 ERA. So, I think anyone would take him,” first baseman Freddie Freeman said of the All-Star. The Braves acquired Greene for a pair of minor-league prospects.

Adam Duvall homered for the fourth time in five games. Ronald Acuña Jr., Ozzie Albies and Tyler Flowers also drove in runs for the Braves, who went 4-2 on a road trip through Philadelphia and Washington, their top challengers for the NL East title.

Atlanta won consecutive series in Washington for the first time since 2013. They also won two of three in late June.

“I don’t get tired of watching that offense,” manager Brian Snitker said. “It’s amazing how they keep fighting. You know, it was tough to lose the lead in the ninth. But they just keep coming back.”

Atlanta got another quality road start from Mike Soroka, who pitched seven innings and allowed just three hits, including a leadoff homer to Juan Soto in the second.

The Nationals rallied against the Braves’ bullpen.

Matt Adams hit a pinch-hit home run against Anthony Swarzak in the eighth to pull within 4-2.

In the ninth, Kurt Suzuki singled in a run off Sean Newcomb (5-1), who replaced Luke Jackson with no outs and two runners on. Newcomb limited the damage from there, however, getting a double-play grounder from Gerardo Parra that tied the game at 4.

“These guys play hard,” manager Dave Martinez said. “They don’t quit. They keep fighting, and they play hard to the end. We just fell short today.”

Josh Tomlin worked a scoreless 10th for his second save.

Duvall homered off Sánchez with one out in the second to continue a torrid stretch.

Since being recalled from Triple-A Gwinnett on July 27 after Nick Markakis broke his left wrist, Duvall is batting .578 with four homers and six RBIs over five games.

Soto’s homer to lead off the second was his 20th, making him the third player in major league history with two 20-homer seasons before his 21st birthday.

In an effort to improve their beleaguered bullpen prior to the trade deadline, the Nationals acquired veteran reliever Daniel Hudson from the Toronto Blue Jays for pitching prospect Kyle Johnston.

The Nationals have the worst bullpen ERA in the majors at 5.97.

Nationals: RHP Joe Ross (0-3, 9.85) will make his first career start in Arizona on Friday, as the Nationals begin a nine-game road trip with the first of three against the Diamondbacks.