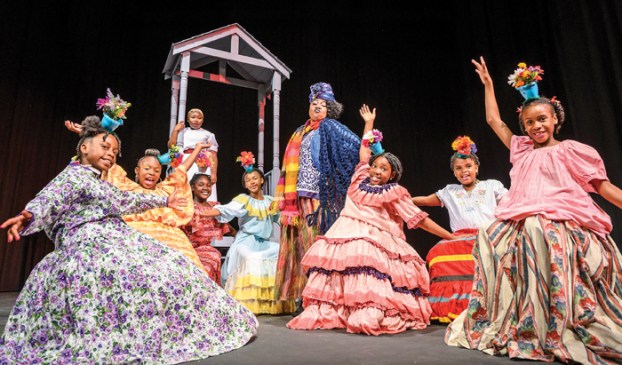 Ease on down the road with ‘The Wiz’

Get yourself some green sunglasses and go on a familiar journey with Piedmont Players’ summer musical, “The Wiz.”

With a huge cast and lots of musical numbers, this isn’t the Judy Garland version of “The Wizard of Oz.” This is the 1975 hip musical that was later made into a movie starring Michael Jackson and Diana Ross.

The music is a mix of rock, soul and gospel, the costumes are funky, the characters are hip. This is the musical that “Ease on Down the Road” is from, and that song will play in your head for days.

The well-known foursome, Dorothy, Scarecrow, Tin Man and Lion, are doing the easing, and they are a likable bunch. Dorothy, played by Keston Steele, is petite and bright and has a voice that hits the high notes without strain.

Her three companions are all charming in their way. Scarecrow, played by Keilen McNeil, is sweet, innocent and floppy, like a good scarecrow would be. Marvin King, a strong singer, is the Tin Man, who’s the hippest of the bunch. John Harris is so convincing as the cowardly Lion, and he, too, has a good voice and roars with conviction.

Marc Anderson is full of bluff and bluster as The Wiz, scaring our friends at first, then showing he’s a total fraud. His philosophy of life is power, prestige and money, just like any other normal guy who lands in Oz in a hot air balloon.

Some bits of the familiar story are left out in the interest of easing on down the road. The Tornado blows in at the beginning, along with her dancers, an interesting way to create a storm. Janelle Williams leaps and spins across the stage as Tornado.

And then comes Addaperle, or the Good Witch of the North. Shar Marlin wears a bright costume and carries a star wand that tends to misfire. But she gets Dorothy on her way to see The Wiz.

A bunch of adorable little girls play the Munchkins, giggling and scooting around stage. They also have several other parts and are fun to watch. And you’ll enjoy the crows that harass Scarecrow, and the Funky Monkeys that like to wreak havoc, and the Poppies who tempt the Lion.

Costumer Ashley Ward of Eastern Costume Co. certainly has her hands full, with multiple costumes for the little girls and others.

Dominic Weaver is Uncle Henry, who we hardly see, but also the Gate Keeper at the Emerald City, doing a nice job with the part. Tameka Brown is Aunt Em and various other characters.

When we meet her wickedness, Evillene, it’s none other than the remarkable Alexis Greer, loving every minute of it. She’s surrounded by downtrodden workers, wailing and moaning and gnashing their teeth.

Iris DeWitt is the bright and good Witch of the South, Glinda, who has a syrupy sweet voice in “A Rested Body,” advice to Dorothy as she prepares to click her heels three times.

Little Rocket Hall makes a brief appearance as Toto before the tornado.

Director Reid Leonard went with a super simple setting, highlighted by his lighting design — dark for the scary bits, light in Emerald City. There are some nice effects for The Wiz, too.

Choreographer Ashlyn Keller-Silver has to move a lot of people around, and the cast does a good job with the dancing.

Adrian Smith is musical director, but the musical uses a soundtrack, not a live orchestra. The chief problem on patrons night was the music overpowered the singers far too often, especially Steele, as Dorothy, who has quite a high pitch. Other times the powerful voices, like Greer’s, kind of overwhelmed the sound system. Perhaps the crew will figure out how to modulate both as the play continues.

It’s a fine production for children, but a bit long for younger ones, about two and a half hours. with one intermission.

By Shavonne Walker shavonne.walker@salisburypost.com SALISBURY — A teenager has been charged in the July 5 robbery of F&M Bank, the... read more