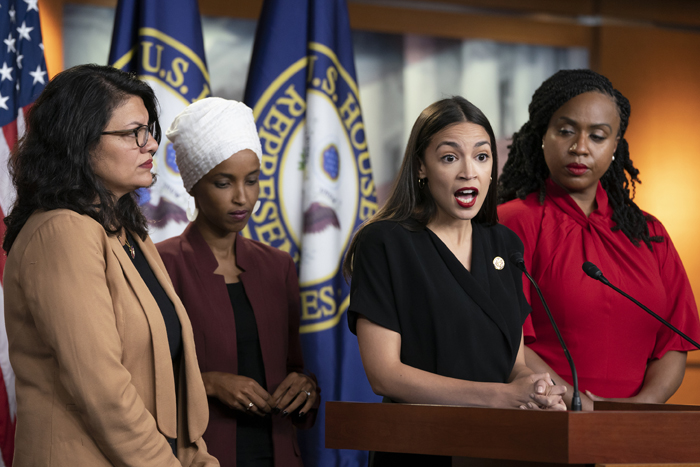 Accusations of racism are so inflammatory that they should always be made cautiously and carefully. But when President Donald Trump told four congresswomen of color to “go back” to where they came from, his comments were not only blatantly racist, they were also sexist, xenophobic and intensely cynical.

In other words, they’re exactly the people his core supporters resemble the least and resent the most.

Add that two of the four congresswomen he targeted are Muslim, and that one wears a head-covering, and the president is checking almost every box of discontent that disturbs his base. Race, gender, class, religion. Only one piece is missing: None of them is gay.

House Speaker Nancy Pelosi was accurate in saying that Trump’s comments prove that “his plan to ‘Make America Great Again’ has always been about making America white again.” Even a few brave Republicans called out the president, with Rep. Mike Turner of Ohio saying Trump’s tweets “were racist and he should apologize.”

But in defending the four women — as they have, and must — Pelosi and her fellow Democrats know they are taking a big risk. That’s exactly what Trump wants them to do. They are playing directly into his larger strategy, to define the Democratic Party in terms of those four first-term legislators, who advance extreme positions on many issues, from abolishing private health insurance and vastly increasing taxes to eliminating college tuition and immediately impeaching the president.

Trump is totally transparent about this. He’s gleefully branded the four the “Radical Left Congresswomen,” and his toady Sen. Lindsey Graham went even further, calling them a “bunch of communists” and thus adding red-baiting to Team Trump’s sins.

In a follow-up tweet, he admitted his strategy, boasting that the four lawmakers “are forever wedded to the Democrat Party. See you in 2020!”

Smart Democrats who actually count votes are deeply alarmed because they see the shrewdness behind Trump’s approach. After the four congresswomen, informally known as “the Squad,” defied Democratic leaders and voted against a bill funding emergency services along the southern border, Pelosi slammed them to New York Times columnist Maureen Dowd.

“Pelosi feels that the four made themselves irrelevant to the process by voting against ‘our bill,’ as she put it, which she felt was the strongest one she could get,” wrote Dowd. “‘All these people have their public whatever and their Twitter world,’ she said, ‘but they didn’t have any following. They’re four people, and that’s how many votes they got.’”

The four fired back, with Ocasio-Cortez accusing Pelosi of being “outright disrespectful” to women of color and Pressley calling the speaker’s comments “demoralizing.”

Even more demoralized are Democratic strategists, who see the Squad swallowing Trump’s bait. “We fought for years to create the majorities to get a Democratic president elected and re-elected, and they’re going to dither it away,” said Rahm Emanuel, one of Barack Obama’s chief advisers, to Dowd. “They have not decided what’s more important: Do they want to beat Trump, or do they want to clear the moderates and centrists out of the party? You really think weakening the speaker is the right strategy to get rid of Donald Trump and everything he stands for?”

Trump’s character and calculation could not be clearer. “When it comes to race,” wrote Peter Baker in the Times, “Mr. Trump plays with fire like no other president in a century.”

But the president presents the Democrats with an excruciating problem. They must denounce Trump’s taunts and defend his targets but not embrace all of the Squad’s leftist ideas. They need to energize minority voters, particularly young ones, without alienating moderates — especially in the critical Midwestern states that gave Trump his victory in 2016 and will be pivotal again next year.

The Squad brings verve and vitality to the Democratic Party. But if they insist on placing purity ahead of pragmatism, if they don’t cool their jets and curb their egos, if they lose sight of the main goal — defeating Donald Trump — they will play right into his hands and hand him a second term.