Memories take off around 50th anniversary of moon landing

SALISBURY — About 530 million people watched their televisions on July 20, 1969, to bear witness to people walking on the moon for the first time during the Apollo 11 landing.

On Wednesday night, more than 40 people gathered at Oak Park Retirement to celebrate the 50th anniversary of the moon walk coming Saturday.

In 1969, Joan Pore watched the lunar landing with a friend. They made sure to wake up all their eight children to watch with them as it happened.

“We knew it was so remarkable, it would be unforgettable,” Pore said.

Now, it’s hard to believe it has been 50 years since those memorable first steps by American astronauts.

The milestone happened in the midst of the Cold War and “space race” between the Soviet Union and United States, eight years after President John F. Kennedy made it a goal of the nation to land a man on the moon before the decade ended. The space program involved about 400,000 engineers, technicians and scientists and had a price tag of $24 billion.

At 10:39 p.m. EDT on July 20, 1969, Neil Armstrong climbed out of the spacecraft and down a ladder to the lunar surface, saying the now-famous line, “That’s one small step for man, one giant leap for mankind.” (Armstrong later contended that he said “for a man” and that the “a” was not originally reported.)

Buzz Aldrin also walked on the moon before the men made their journey back to Earth with Michael Collins, returning on the planet July 24. 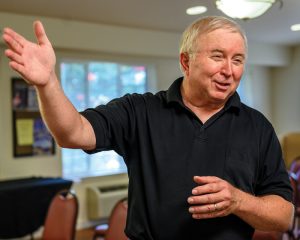 The anniversary party at Oak Park celebrated the history as part of a larger “staycation” program. It featured speakers, telescopes, moon-themed food and songs such as “Fly Me to the Moon” by Frank Sinatra. Roger Leonard spoke to guests about his father’s work at NASA, and Amy Pruitt of Horizons Unlimited spoke about that agency’s education programs.

“Everybody was excited about it,” Walter Leathers said about the moon landing. He came to Wednesday’s celebration with his camera in hand. “We thought they were a bunch of nuts. It was like Columbus.”

Leathers watched the moon landing on television and remembers most other people at the time doing the same.

“I would’ve seen it 20 times on the reruns otherwise,” he joked.

Leonard wasn’t quite as excited at the time of the lunar breakthrough. His father worked at Cape Canaveral, so Leonard was used to being close to the space program growing up. When family friends came to visit, he was the one to show them around.

He was in junior high when the moon landing happened, and he is pretty sure that he was asleep when it started. Luckily, his father woke him up to make sure he watched it on television.

“We lived with it. It was not a big deal for us,” he said. “Now I look back and think, ‘Wow, they did something pretty cool.'”

Jean Redding was in Washington working for an accounting firm at the time of the moon landing. She and her late husband were both pilots of single-engine aircraft, so sometimes she flew to see clients who had their own runways on their farms.

Nonetheless, she remembers being in awe at the science behind the endeavor.

“It was beyond our imagination,” Redding said. “It was something to think about — ‘How much farther will they go? Will the world even last that long?'”

Some residents of Oak Park Retirement are taking their moon landing celebration to new heights with other activities that are part of their staycation. On Thursday, 88-year-old Flo Starnes went to iFLY in Concord for indoor skydiving with five others.

“I never dreamed that I would fly,” Starnes said.

Starnes said she was excited when she witnessed the moon landing back in 1969. She drank Tang because she had heard that it was what the astronauts drank. Her children referred to it as “astronaut orange juice.”

Starnes has flown in the open cockpit of a biplane, and she was eager to experience weightlessness in the same way the astronauts did back when she was watching them on a black-and-white television.

“There aren’t words to tell you,” she said. “It was the most exciting thing that you ever saw.”

Summer heat won’t end soon; here’s how to protect yourself

SALISBURY — This week brought heat and humidity with temperatures in the low to mid-90s and, according to a National... read more