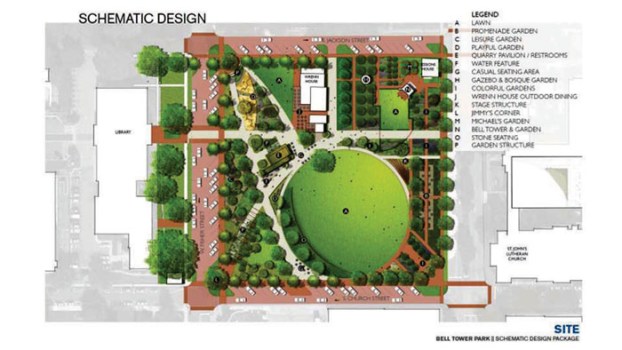 Mark Wineka/Salisbury Post This master plan for Bell Tower Green shows a park vision that's about 90 percent fleshed out. The boundaries are South Church Street at bottom, West Innes Street on the right, South Jackson Street at top and West Fisher Street on the left.

bSALISBURY — The nonprofit group behind the proposed Bell Tower Green says that after three years of dreaming, listening, planning and fundraising, it’s time to “build a park!”

“We are thrilled to finally be breaking ground on our new downtown park, which will be a transformational project for our city and county,” Dyke Messinger, president of Bell Tower Green Inc., said in a news release Wednesday,

The public is invited to a groundbreaking at 10 a.m. Aug. 3 at the proposed park, which is bounded by West Innes, South Church, South Jackson and West Fisher streets.

The park owes its name to Salisbury’s iconic Bell Tower.

Bell Tower Green Inc. chose David E. Looper and Co. of Hickory as the general contractor for the park. The company has “a stellar track record” completing large commercial projects throughout the Piedmont, the news release said.

“In a competitive bidding process,” Messinger added, “they rose to the top in terms of quality, price and dedication to the Bell Tower Green project.”

Bill Burgin, a member of the park implementation committee, said the community was blessed to have received several bids from top-notch contractors.

“This project seems to excite all those who engage with it,” Burgin said. “The reputation that David E. Looper and Co. brings to this project is yet another validation of just how big of a deal Bell Tower Green is going to be for our community and the region.”

The master plan calls for the creation of significant green space, including the planting of more than 150 trees.

A signature feature of Bell Tower Green will be a large water wall in the middle of the park. The water wall will be showcased at night with LED lighting. It also will incorporate a splash pad for children.

In addition, the park will have multiple flower beds, a children’s play area, multipurpose hardscapes, a performance stage and a grassy “commons” area for community gatherings, active play and programmed activities such as movies, yoga and festivals.

“Bell Tower Green is nothing short of a miracle,” said Paul Fisher, a board member of Bell Tower Green and co-chairman of the group’s fundraising committee. “Three years ago, we had no idea how we were going to make this park a reality. But the community stepped up in a big way, and now here we are on the cusp of breaking ground on what will be one of the finest urban parks in North Carolina.

“Truly, this has been a community effort, with 85% of the funding for this park coming from individuals, families and foundations with Rowan County ties who want to see Rowan County become all that it can be.”

The other fundraising committee co-chairman, Edward Norvell, said, “This city block has been wanting to be a commons and park for more than 250 years — since Salisbury received its official charter to become a township. It’s humbling to be a part of this historic moment in time when we get to create something that will significantly impact our community’s citizens for hundreds more years to come.”

Roughly $10 million has been raised for Bell Tower Green.

“While we are very proud of the way our community has stepped up to make this park a reality,” Messinger said, “construction costs have risen steadily since we began our fundraising campaign for this park three years ago.”

He said the fundraising is still $2 million short of what is needed to build out all that the master plan calls for.

“Nevertheless,” Messinger said, “we are moving forward with construction, recognizing that the time to build our park is now. If we have to hold back on some of the individual features due to fundraising shortfalls, we will make that decision when the time comes.”

The additional $2 million is needed for “park and streetscape completion,” according to the news release.

“Bell Tower Green will soon begin hosting fundraising events throughout the county to allow everyone to participate in making this park a reality, no matter how big or small their contribution,” Fisher said.

The park construction is estimated to take 16 to 18 months.

“While we are doing all that we can to address noise, dust, construction traffic, runoff, etc., any construction project nearly 4 acres in size is going to have its challenges,” Wagoner said. “We just ask the community to be patient with us as we work through challenges of construction and weather as they arise.

“In a year and a half, we will have a beautiful green space unlike any other in the state, but it will surely seem at times like the site is a long way from being a natural oasis.”

Messinger praised the city of Salisbury for including Bell Tower Green in its 2019-20 budget.

He also recognized the local state legislative delegation for advocating for funding in the state budget.

“Truly, our government partners have bent over backward to help us keep this project moving forward,” Messinger said. “The City Council and Rep. (Harry) Warren and Sen. (Carl) Ford could not have been more supportive in trying to help us secure funding at this critical chapter in the park’s development”

From the developer of the Empire Hotel to other building owners downtown, Messinger said, the Bell Tower Green board has received numerous requests for copies of the master plan “as they look to promote the park to investors in their own commercial and residential projects.”

SALISBURY — The Salisbury City Council approved changes to encourage the development of downtown residences at its meeting Tuesday. The... read more