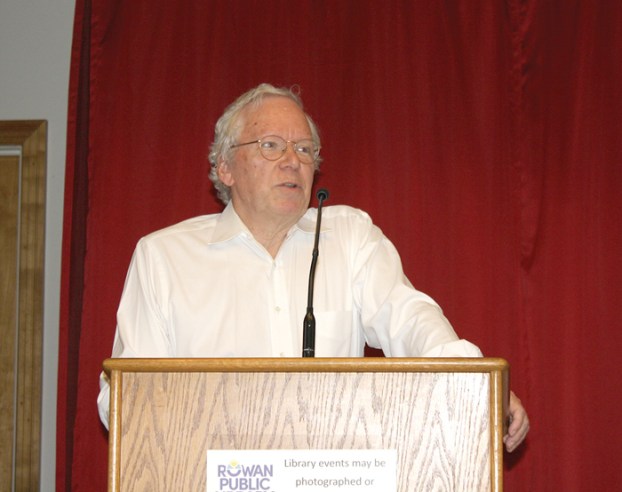 But he wanted to change that to Universes of Story. “A story can create its own universe,” he said.

“Why are we so fascinated by stories? Is it a way to share our experience?” People have been telling stories since the cave men days — in word, song and on the cave walls.

“Story structure gives meaning and purpose to life,” de Castrique said. It’s the power of stories that brings them forward to our time.

What makes a story? Aristotle says it has to have a beginning, a middle and an end.

De Castrique said fiction begins with one question — “What if?” What if a 10-year-old boy got an invitation from an owl?

De Castrique has written 17 adult mysteries, and two for young people. He’s doesn’t stick with the old adage, “write what you know.”

With mysteries, you write about what you might have known.

He was born in Hendersonville. His father was a funeral home director. De Castrique heard stories from his experiences. From that, he created character Barry Clayton, a younger, smarter man than his creator, and a former police officer.

An important part of the story is how the “character” of the character is revealed.

Setting has four dimensions — a place in space, a place in time, the duration of the story and the cultural canvas of the setting. “The human dynamics,” de Castrique said.

The setting of the funeral home provided stories within stories; many times those stories were about being tested by tough times. “A story has to have a conflict,” he said.

Barry wanted a career in law enforcement, but when his father develops symptoms of Alzheimer’s, he comes back to run the family business. And from that story, other stories grow.

De Castrique’s other recurring character is Sam Blackman, an Iraqi war vet who loses his leg. When writing the first story involving Sam, de Castrique used an old story from a journal as the jumping off point.

It must have worked, the author said, because his editor said “You’re not finished with this character. Write more.”

Sam has now been in six books, all set in Asheville, most involving history and literature. Stories from the past create the mysteries of the  now in Sam’s books.

A story can come from an image, as well. De Castrique works with video and film production. He remembered a video of a 5-year-old, Clair, who needed a heart transplant. She had waited twice as long for a new heart as most people, and was in danger of being removed from the transplant list, but just in time, one became available. While de Castrique and his crew were filming the heart arriving at Levine Children’s Hospital by helicopter, a huge storm was brewing. Tensions rose. But Clair had surgery, she went back to school and the beach, and she celebrated Christmas. Two days later, she suffered massive rejection and died.

“What is it that haunts you after the story,” he asked. “Be it in a play, on the page, on film. It’s bigger than yourself. Think of the courage of that family that donated the heart while you think about Clair’s family.”

With a mystery, you can’t have an arbitrary conclusion, de Castrique said. “The solution can’t be predictable, but it has to be inevitable.”

He tries to keep his work topical, and his new book, “Murder in Rat Alley,” due in December, is set against the backdrop of the Apollo missions, in the year we celebrate the 50th anniversary of the moon landing.

But what does Sam Blackman have to do with space? Well, it just so happens, there is the very real Pisgah Astronomical Research Institute or PARI.

It was a satellite tracking and data collection station for NASA in the 1960s. The Russians were very curious about what went on there in the woods.

It is still a center for science and learning, with those same radio telescopes still collecting data.

Rat Alley is a real place in Asheville, though not mentioned in the guidebooks. What if, de Castrique thought, a murdered scientist showed up there 50 years later?

“My goal is to write a good book that the reader enjoys. If it’s very good, people will read it again, and eventually, that will make it a classic.”

Ask yourself, what is the power of your story? What in the universe — a theme greater than you — is creating events or spurring a reaction to them?

Books can make life better and more meaningful to others, de Castrique said. “And the public library outranks any one thing a community can do for its people.”

My evening on Sunday, July 7, at the Discovery Yukon Lodgings was very short, but that was fine. The fact that... read more