Woman gives CPR to passenger who OD’d after traffic crash 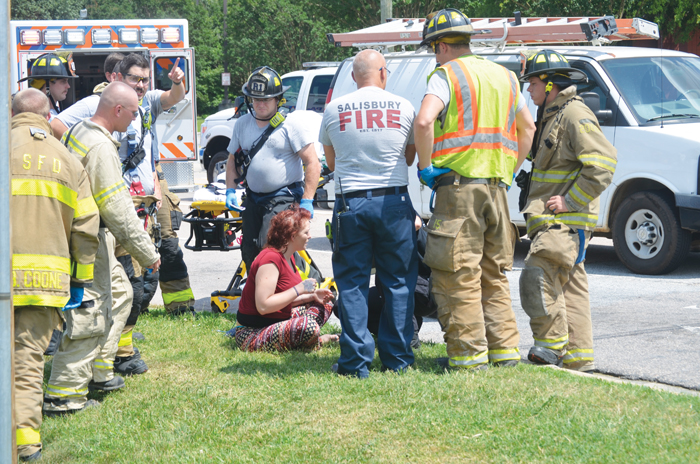 Members of the Salisbury Fire Department stand by as a woman, who bystanders said was unconscious and later revived, is monitored to make sure she is alright. The woman was a passenger in a vehicle where the driver caused a three-vehicle collision. Shavonne Walker/Salisbury Post

SALISBURY — A driver involved in a three-vehicle collision says she performed CPR on a young woman in another vehicle who reportedly overdosed Thursday evening.

Another driver was arrested at the scene after a sobriety test.

The Salisbury Police Department, Rowan County EMS and Salisbury Fire Department were called to the scene. A fire crew provided Narcan, a drug overdose reversal medication, at the scene.

The collision occurred at the intersection of Lincolnton Road and Jake Alexander Boulevard in front of Burger King.

Jamie Blakeney said she was traveling in her Dodge Charger on Lincolnton Road and was about to make a right turn when a Toyota Camry moved into her lane. The vehicle struck a work van that was also on Lincolnton Road.

Blakeney said the male driver, whose name was not released by authorities, appeared to be driving toward the fast-food restaurant. Blakeney said he got out of his vehicle and seemed “out of it.” She said she got out of her car, motioned for him to stop and told him she called 911.

Blakeney said she pulled the woman from the passenger seat when she realized she was unconscious. She performed CPR after she noticed the woman’s mouth was blue.

“I think she was basically dead,” Blakeney said.

Blakeney said she noticed afterward that the woman had what she believes to be track marks on her arm and was bleeding from the area.

The woman was surrounded by a fire crew until she seemed able to get on her feet. She was later seen walking near the scene of the accident.

Police Officer Matt Benjamin had the driver perform a series of field sobriety tests and, after a few minutes, the man was arrested.

Police officials did not provide details about the collision on Thursday.