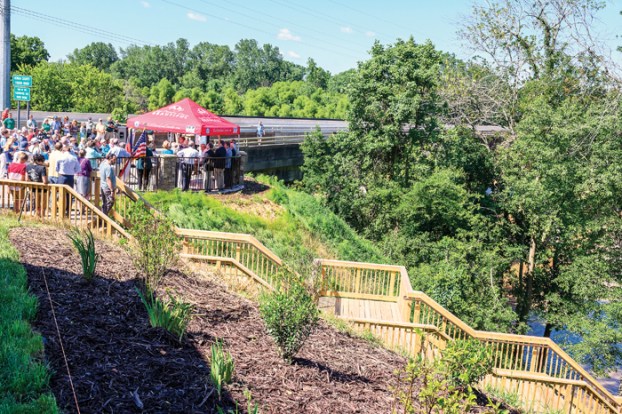 There is something about waterways which is relaxing to the soul.

As urbanization increases, and it will continue to do so, it’s refreshing to hear an increase in interest in preserving historic sites, increasing accessibility and recreational opportunities along the Yadkin River and High Rock Lake. The main and South Yadkin River make up the entire northeastern boundary of Rowan County.

The question has been asked, “Why can’t we do something similar to what Davidson County is doing at the Wil-Cox Bridge area?” The answer, quite simply, is “We can.” With decades of experience in historic preservation, which Davidson County does not have, Rowan can do something even better. We can set the standard.

In 2000 I began researching the historic Trading Ford area of the Yadkin River, which had been ignored for decades.  I am like nature; I rush in to fill a vacuum. It was widely believed that the area had been completely inundated by High Rock Lake. I thought it would be the poster child for a lost cause.

Bit by bit I found that much more remains than anyone supposed and raised from the dust of obscurity the story that brought its past to life.

The Trading Ford area extends from the 1818 Beard Bridge site behind the-then Yadkin Finishing Co. to the bend in the river. Spanning 4 miles of the river, with adjoining land on both sides, this area contains an incredible concentration of historic sites, which constitute a microcosm of American history — early settlement roads, fords and ferries; 19th – 21st century bridges; Revolutionary and Civil War military sites; and, possibly, a 16th-century Spanish fort.

I founded the Trading Ford Historic District Preservation Association in 2003. In the years since I succeeded in raising awareness of and getting recognition of these sites at the local, state and national level.

I have always advocated a preservation approach inclusive of both Rowan and Davidson counties. Unfortunately, Davidson County doesn’t work well with others.  Nonetheless, Rowan Countians can certainly devote their energy to preservation and development of accessible, heritage tourism places within the Trading Ford area.

Alcoa’s historic survey identified a number of river crossings, mill sites and other historic locales below Trading Ford, which may be worthy of some kind of commemoration. I have been thinking about a map of the river’s significant historic sites spanning the entire length of the county’s boundary.

Cube Hydro is bound by license provisions, which Alcoa negotiated with its stakeholders.  Cube plans to improve access areas, provide a new accessible fishing pier in Rowan County, donate land to Rowan County for a new swim area and beach as well as develop 10 campsites throughout the project area.

Residents and visitors would benefit from well-planned commercial enhancements along the river — down-home restaurants, lodges, public campgrounds, possibly another marina, outfitters, ice cream shops, craft stores and perhaps a public performance space.  In the right place, I could imagine spending a weekend afternoon or summer evening listening to a variety of music genres, perhaps even a Salisbury Symphony concert, as the river flows by on its journey from the mountains to the sea.

So, yes. We can preserve and restore historic sites along the river and enhance the attraction of High Rock Lake. If we come together and put our passion into it, there isn’t much we can’t do.

By D.G. Martin Colin Kaepernick and Nike are right about one thing. The original American flag, the one we think... read more