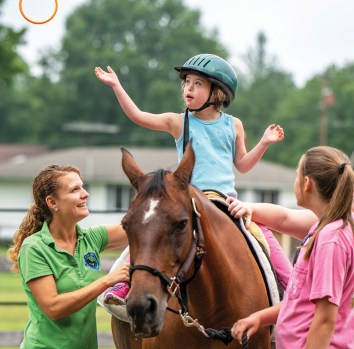 Ella Lucas, 7, throws a ring during one of her therapeutic classes. Bernadine Hernandez/Salisbury Post 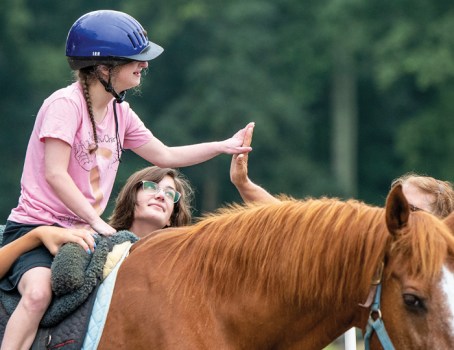 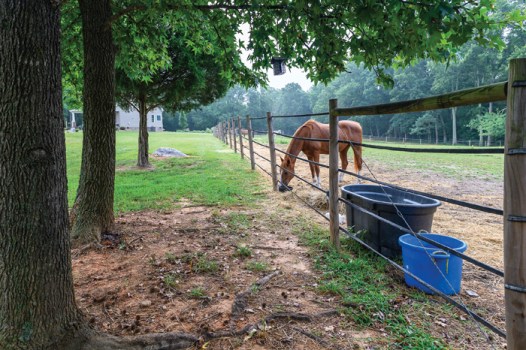 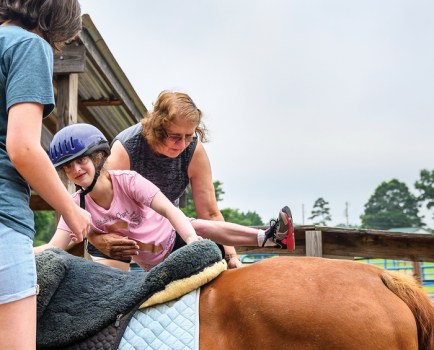 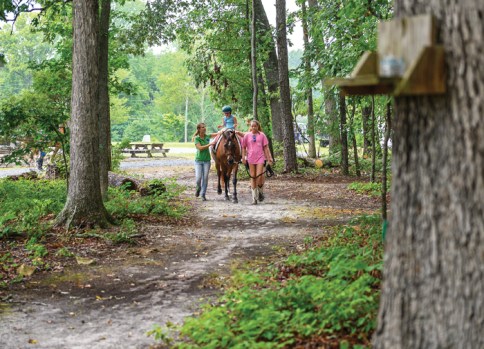 Riding through the trails is part of the therapeutic program at Saving Grace Farm. Bernadine Hernandez/Salisbury Post

SALISBURY — Saving Grace Farm Executive Director Janna Griggs stood with her wrists resting against her hips as she surveyed the surrounding pastures, trail and structures.

It’d been three years since the farm, a base for horse-assisted therapy, relocated from Old Mocksville Road to its new home on Jackson Road. In that time, Griggs said, the program has seen marked growth. The location change, combined with word of mouth and an upswing in the economy, meant the organization is now serving more than 30 riders throughout the year.

But, said Griggs as she looked around: “We’re trying to house too many horses on a little-bitty property. … And we’re land-locked.”

Griggs said she had plans to work toward a capital campaign in the next six months to a year to find a permanent home for Saving Grace’s therapeutic programs.

The farm’s 2016 relocation followed a shift in ownership of the previous site. Saving Grace had rented the location, but Griggs said the transition wasn’t working well with the new property owners.

The difficulty was understandable, she said. Equine-assisted therapy provides physical, social and cognitive benefits to participants, and Saving Grace’s program focuses on people with special needs or disabilities, at-risk youths, seniors, veterans, and those who have experienced trauma. The necessary facilities — parking, an accessible mounting ramp, and block and space for clientele — required careful consideration, said Griggs.

“You’re asking another property owner to change their property for your organization,” she said. “I didn’t want to get in another renting situation where we could end up homeless again.”

So she offered her own, newly finished home and land as the site of the program, adding three part-time staff members to assist as the number of enrollees increased.

Operations have continued smoothly since the new site opened, though the space has presented its challenges. Too many horses for the available space means the program has to rely on hay bales for feeding, and costs for bales are continually on the rise.

The new location also lacks a covered arena, meaning lessons are subject to the weather.

“When we had that bad snap of weather last year, we had to cancel so many lessons it wasn’t funny,” said Griggs.

With these and other needs in mind, Griggs said she’s begun the search for new property — a place the organization can buy and truly make its own.

“We’re not set up in the ideal situation. It would be hard to expand here,” she said. “I don’t want donors putting a ton of money into my property. I don’t think that’s right.”

The purchase and upfitting of a new property would offer an additional benefit: Saving Grace could continue to offer programs during the transition. The farm paused operations for a number of months during its previous move.

Continuity in and availability of lessons would benefit Saving Grace participants, said Paul Lucas, a board member and father of 7-year-old rider Ella.

“I came on to the board four to five months ago, and part of the reason was because of what I think of these folks here and seeing the impact it’s had on Ella and the other kids,” Lucas said.

Ella, who has Down syndrome, has accomplished great things since starting the program three years ago, he said. By working on a horse, she’s improving her core muscle strength and motor and verbal skills.

Griggs agreed, quoting Winston Churchill: “The outside of a horse is good for the inside of a man.”

Even in typically developing teenagers, Griggs said work alongside horses has been shown to decrease stress levels. In kids with autism, she said, studies have shown work with equine-assisted therapy leads to decreases in negative behavior and increases in attention and focus.

“There’s just something magical about (horses), and I don’t think anyone fully understands what it is,” she said. “What we offer is not just a pony ride. Even if it looks that way, there’s always something going on under the surface.”

To learn more about Saving Grace Farm, to donate or sponsor a rider or horse, visit https://www.savinggracefarm.com.