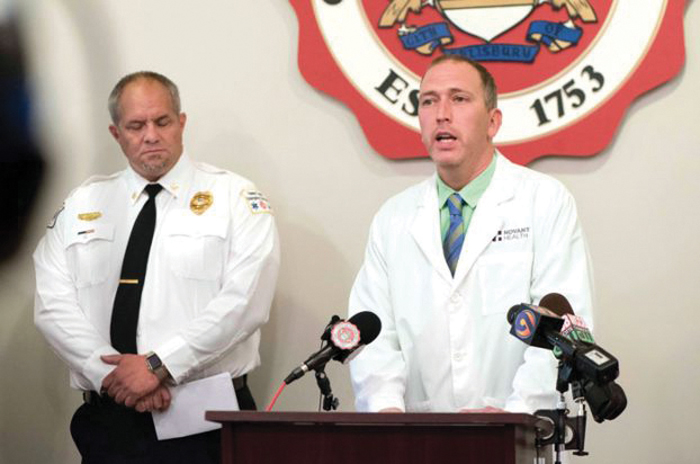 Dr. John Bream, medical director of the emergency department at Novant Health Rowan Medical Center, says the number of people reporting to the ER high on meth is similar to what medical professionals were seeing in 2008. Jon C. Lakey/Salisbury Post file photo

SALISBURY — Dr. John Bream, medical director of the emergency department at Novant Health Rowan Medical Center, says he has seen an increased number of people coming to the hospital high on methamphetamine.

But local law enforcement officials say, like last year, many of the people they encounter with drug problems are high on heroin.

Both law enforcement and health officials believe the reason for a downturn in the number of heroin overdoses reporting to the hospital could be the result of the use of Narcan. The nasal spray is used to reverse the effects of an opioid overdose.

In 2017 and 2018, city and Rowan County law enforcement agencies, public health agencies and county officials banded together to chip away at the increase opioid abuse throughout the county.

In 2018, a number of initiatives and education programs were implemented, one of which led the Rowan County Public Health Department to give away free Narcan kits to anyone who wanted one.

“We are seeing a large number of patients coming in with methamphetamine toxicity,” Bream said.

The number of people reporting to the ER high on meth is similar to what medical professionals were seeing in 2008, when a substantial number of people were coming in high on bath salts, he said.

The effects of patients high on meth include a tendency toward violence, hallucinations, paranoia and psychotic episodes. One local man, charged June 20 with two burglaries and found by police officers wielding a machete, was in a meth-induced overdose, said Salisbury Police Chief Jerry Stokes.

Bream said one patient arrived at the emergency department on a three- to four-day meth bender. Unlike heroin, for which the overdose can be reversed, there is no reversal for meth.

“There’s no antidote to meth intoxication. You have to wait for the body to metabolize it. We can blunt the symptoms, but we can’t reverse them,” Bream said.

“I think the thing that differentiates it from heroin is people who use heroin aren’t violent. It almost has the opposite effect. These people are up for three to four days on meth. They are hallucinating and violent. They are committing crimes,” Bream said.

How law enforcement officers respond to people high on meth or heroin is dictated by what drug they’re using. Essentially, opioids like heroin are a depressant and meth is a stimulant.

“People in an overdose for opioids are generally in a situation where they are not breathing. Those in an overdose of meth are usually more aggressive and experiencing a psychotic episode,” Stokes said.

Stokes said the city has not seen a significant increase in meth cases, and the number of heroin overdoses is about the same as last year.

“Patrol, in general, isn’t seeing a jump in the amount of meth being recovered, and our narcotics detectives are not seeing an increase in the number of meth investigations. So I would not say meth has increased for the city at this time. That doesn’t mean that because the number has increased countywide we won’t see that jump up in the near future,” Stokes said.

There was a jump last week in the number of overdoses in what police investigators believe was a “bad batch” of higher-strength heroin circulating in the city. Stokes said police don’t really know what was at the root of those incidents.

Police Capt. Melonie Thompson said that from June 16 through June 30, there were several drug overdoses, a number of them in the East Innes Street area. Each day on June 20, June 23, June 24 and June 25, a homeless person overdosed on heroin. All of those were reported between the 500 and 900 blocks of East Innes Street. Emergency responders administered Narcan in each case, and each overdose subject refused further treatment, Thompson said.

Thompson said what police investigators ascertained is that the drugs taken in those incidents were either stronger that usual, that the drug wasn’t what the dealer said is was, or the user took more than he typically would.

In one case, a mix of heroin and methamphetamine was ingested.

Oftentimes, “as long as they are ‘OK,’ they aren’t going to the hospital,” Thompson said.

“What we’ve seen based on investigations is heroin and meth are available. They are the cheapest that I’ve seen it,” said Deputy Chief David Ramsey of the Rowan County Sheriff’s Office.

Ramsey said in a smaller dosage, 3.5 grams — an 8-ball — of meth goes for about $150. Most dealers sell the drug in a small balloon, plastic sandwich bag or plastic wrap.

Law officers also have seen the number of meth labs decrease because the drug so inexpensive to purchase.

Ramsey said cocaine is still in use but not as prevalent as meth and heroin. Several years ago, Rowan detectives were dealing with a large number of investigations that involved black tar heroin. Ramsey said the most common type of heroin brought into Rowan County is China white.

Heroin is being distributed by people in the community who are getting the drug from Mexican nationals, Ramsey said. The drugs are coming from Atlanta or Charlotte, Ramsey said. Meth is sometimes shipped here by airplane from California through the Postal Service or FedEx and by way of Georgia.

In August 2018, a federal grand jury indicted 28 people in connection with a drug-trafficking ring involving meth, heroin and cocaine that operated out of a Rockwell house and crossed state lines. A February 2017 case involved drug trafficking — in heroin and meth — that dated to 2014 and had ties to a Mexican cartel and the Aryan Brotherhood gang.

When law enforcement receives calls about overdoses, emergency medical service crews also respond and administer Narcan or someone in the vicinity will give the reversal drug. Ramsey said he knows a lot of people who are high on opioids aren’t going to the ER, which could account for the lower number of opioid overdoses reported at the hospital.