Extras relish their part in filming ‘The 24th’ 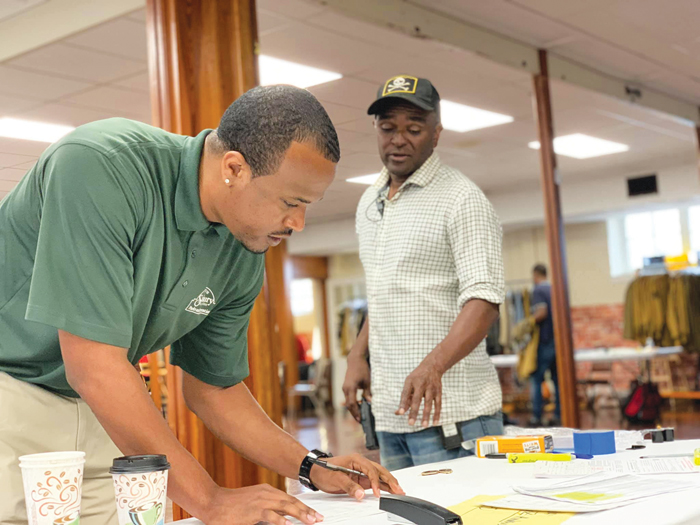 Sam Wilburn, program director for the Salisbury Parks and Recreation Department, played a soldier in the film 'The 24th,' filmed in the city. City of Salisbury photo

SALISBURY — Filming of “The 24th,” based on the 1917 Houston Riot, wrapped up last week, but extras and crew in Salisbury are reminiscing about their involvement in the feature film.

Jacob Bohan, a student at the University of North Carolina at Charlotte, played a Houston resident. Sam Wilburn, program director for the Salisbury Parks and Recreation Department, played a soldier.

Neither was prepared for the long day that awaited them as a movie extra. Bohan worked for two days, and Wilburn was asked to fill in at the last minute.

Wilburn was expecting a 9-to-5 day, but it turned into a 9-to-10:30 p.m. day. The experience was worth it but something that opened their eyes to how much goes into the film business.

Terri Jones, an archivist with the Historic Salisbury Foundation, was chosen by the foundation’s board to assist with filming. The Depot was one of the scenes.

Jones previously had done some work as an extra and followed bands around when she was younger. She has an interest in what goes on behind the scenes.

“I’ve always loved being a part of the circus,” Jones said.

According to Peter Minor, location manager for “The 24th,” the Historic Salisbury Foundation was crucial to local filming.

“They just set us on the right path,” Minor said. “They kept us from expecting too much while showing us solutions of what we needed.”

Jones said Minor was great to work with because as he coordinated with everyone. He called Jones multiple times a day with updates and to make sure she had gotten something to eat.

“He never looked like he was breaking a sweat,” Jones said. “You have to love it.”

Being an extra was a lot of waiting on set, according to Bohan and Wilborn. One five-minute scene took about 40 takes, Wilborn said.

Wilborn said the film was a bucket-list experience and something he can bring up as a cool fact about himself during ice-breaker conversations.

The job gave Bohan an appreciation of all the details that go into filming.

“When you’re actually on a set, it’s like a science,” Bohan said.

Wilborn said while filming, he talked to some of the 60 other extras playing soldiers. Some were from Tennessee and New Jersey. He realized that for some, being an extra is a career.

Jones said the hard work on set was inspiring.

“It blows your mind how dedicated they have to be,” Jones said.

They both would recommend the job to others. Bohan said it’s a good fit if you’re outgoing and like the idea of being put in a Halloween costume and on camera.

Wilborn said it is exhausting to think about all that went into it.

“I think I’ll keep my day job,” he remembers thinking after a long day. But he has no regrets and recommends it for anyone interested in acting.

“By all means, go for that opportunity,” Wilborn said. “Go for it.”

Jones is anticipating the final product after getting a glimpse from helping on set and reading the daily schedules. Wilborn said he couldn’t give many details of his day of filming at the Meroney Theatre, but that it will be a powerful scene.

The extras also hope “The 24th” brings more attention to Salisbury as a setting for future films, especially given the city’s ability to transform to 1917.

“That’s the kind of promotion that a town of any size benefits from,” Jones said.

Minor said Salisbury was a perfect match for a film dealing with a specific event in history and the city lended itself to what was needed while the community was accommodating and welcoming.