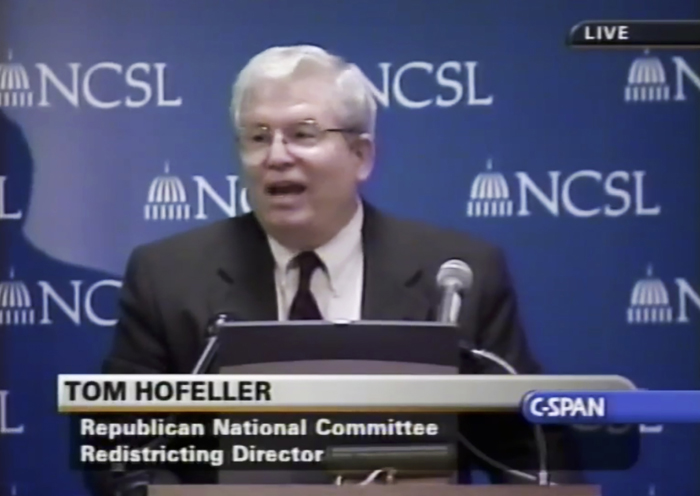 In this Aug. 13, 2001, file frame from video provided by C-SPAN, Tom Hofeller speaks during an event at the Republican National Committee in Washington. C-SPAN via AP

RALEIGH — Documents recovered from the house of a deceased Republican mapmaker that are part of a partisan gerrymandering lawsuit shouldn’t be used in this month’s scheduled trial because there’s no way to authenticate them, GOP lawyers said Tuesday.

The files linked to Tom Hofeller — a longtime redistricting consultant who helped Republicans in North Carolina and other states draw maps to expand electoral power this decade — were subpoenaed in March by attorneys for the plaintiffs.

Some of Hofeller’s files have surfaced in separate litigation in other states challenging a plan by the Trump administration to include a citizenship question on the 2020 U.S. census. Those cases haven’t focused on whether the documents are legitimate.

Common Cause, the state Democratic Party and voters, all of whom sued over the House and Senate maps, received from Hofeller’s estranged daughter, Stephanie Hofeller, more than 75,000 files from more than 20 hard drives and thumb drives. The daughter said she came across them while looking for personal mementos in the months after her father’s death in August at age 75.

The plaintiffs’ lawyers told a three-judge panel they want to use only 35 of those documents in the trial, scheduled to begin July 15. They say the files will bolster their arguments that Republican legislators drew state legislative districts in August 2017 with excessive partisan intent, in violation of the state constitution.

The files will show “Hofeller in fact did have significant discretion and did use partisanship as a predominant motivation in drawing districts in county groups and within significant parts of the state,” attorney Daniel Jacobson told the judges.

The plaintiffs want the maps redrawn in time for the 2020 elections. The party that wins majorities in the elections will control the next remapping, which takes place once a decade.

The Republican lawmakers who drew the 2017 maps have said they followed state redistricting rules and weren’t aware then of whatever map-drawing Hofeller did on his own time before the legislature officially hired him in June of that year. The legislature voted on the boundaries that August. Hofeller completed the actual drawing of the legislative boundaries on a state-owned computer.

Lawyers for the GOP want the judges to keep the files out of the trial and have them destroyed, saying they were improperly obtained. Regardless, attorney Phil Strach said, there’s no way to ensure the files were written by Hofeller and haven’t been altered because he’s dead.

“If this court is going to try this case on the facts and the law, these files are baseless speculation and they will remain so,” Strach said. “There’s nothing the plaintiffs can do to fix that because Dr. Hofeller is not here to talk about those files.”

Tuesday’s hearing came less than a week after the U.S. Supreme Court ruled in a 5-4 decision that federal courts have no authority to rule on partisan gerrymandering claims. But Chief Justice John Roberts wrote in the majority opinion — responding in part to challenges to North Carolina’s 2016 congressional map — that action could still be taken by Congress, the state legislature and state courts.

This case continues, as the plaintiffs sued in state court and allege violations of the North Carolina Constitution.

Superior Court Judge Paul Ridgeway, presiding over the three-judge panel, gave no indication when it would rule on motions on whether the 35 files should be kept out of the trial. Strach wants the judges to delay the trial date if Hofeller’s files are allowed.

Ridgeway also didn’t say when the panel would rule on demands by Republican attorneys to consider punishing the plaintiffs’ lawyers for their conduct related to accessing Hofeller’s files. Mark Braden, a lawyer for the GOP lawmakers, said there’s no telling how many people have reviewed the documents — some of which are personal or confidential — and whether they’ll end up in other litigation, like the census cases.

“The lust for these documents and the desire to distribute them nationwide overcame any normal ethical judgment,” Braden said.

Stanton Jones, a plaintiffs’ lawyer involved in both the North Carolina redistricting and census litigation, said no unethical action was taken and that “courts not only allow but encourage the sharing of discovery material that’s received from one case to the other cases where it’s relevant.”

The trial is expected to last two weeks. Any outcome likely will be appealed to the state Supreme Court, where six of the seven justices are registered Democrats.