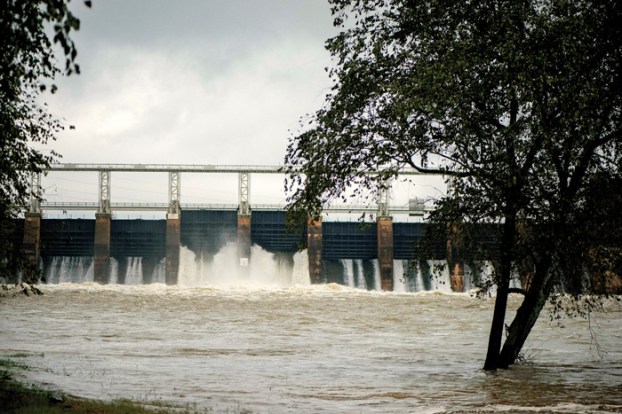 A high volume of water flows through High Rock dam in September 2018.

For locals, the proposed sale of Cube Hydro to Canada-based Ontario Power should have negligible effects.

That’s according to Cube Hydro Carolinas, which owns and operates High Rock Dam and others on the Yadkin River. The company said in an email statement that operations effectively will remain unchanged.

“Cube Hydro Carolinas and its affiliates will continue to operate in the same manner we always have, with a focus on safety and compliance as our No. 1 priority,” the company said. “Cube Hydro’s commitment to economic development in the Uwharrie region will be further supported by this transition.”

The statement also provides important details about the deal, which international business news website Reuters reported to be valued at $1.12 billion.

“Cube Hydro Carolina’s primary investor, I Squared Capital, has signed an agreement to sell its interests in Cube Hydro to a subsidiary of Ontario Power Generation,” Cube Hydro said.

The deal will be subject to regulatory approvals. Cube Hydro and Ontario Power Generation are working on those approvals, the companies said in a news release. Asked by the Post on Friday, a representative of the Federal Energy Regulatory Commission said entities acquiring licensed hydro projects, including the Yadkin dams, must file an application to transfer the license.

No significant staffing changes are expected, and that might be comforting to folks who have just become familiar with the ways in which Cube Hydro has handled the High Rock dam, lake levels and other matters on High Rock Lake.

Cube Hydro announced its plans to purchase Alcoa’s four hydroelectric power plans on the Yadkin River in 2016. Alcoa had overseen the Yadkin dams for nearly 100 years. Based in Maryland, Cube Hydro’s purchase of the Yadkin River sites represented its entry into North Carolina. The same will be true for Ontario Power Generation.

In July 2016, then-CEO Kristina Johnson visited the Salisbury Post with other staff, saying the company was “here to be part of the community.” The sooner a 50-year operating license was granted, the better, she said.

Johnson spoke about making investments to improve water quality, something the Yadkin Riverkeeper said at the time had been neglected by previous owner Alcoa.

Now, Cube Hydro has the 50-year license after a long process that started under Alcoa and involved a long-running lawsuit pursued by the state under Democratic and Republican administrations.

And in May of this year, the company completed a significant upgrade that included commissioning a first-of-its-kind aerating turbine. A May news release said the High Rock facility is also equipped with a proprietary, linear aerating valve. Said simply, those upgrades boost oxygen levels downstream and help the company meet dissolved oxygen requirements. The commissioning of those upgrades came nearly two years after Cube Hydro announced it would partner with General Electric Renewable Energy to install three aerating turbines at its High Rock site.

Since the initial acquisition, Johnson has moved on and serves as chancellor of the State University of New York, which has 64 college and university campuses. John R. Collins, who was previously executive vice president of Cube Hydro, moved into the president and CEO slot after Johnson’s departure.

So, how do locals feel about the sale? Asked by the Post, they ranged from being unsure what the sale would mean to being hopeful about what comes next.

“We’re planning to reach out to the new owners as soon as the transfer is completed,” Edds said. “We’ve had a very good working relationship with Cube, and we’re looking forward to extending a warm welcome to OPG and expect to build a positive relationship with them.”

For its part, Ontario Power Generation in a news release said the acquisition will provide benefits to those who live in the province of Ontario.

“This is also an opportunity to grow our revenue base over the long term and provide increased returns to our shareholder, the province of Ontario,” OPG President Ken Hartwick said in a news release.

More specifically, the government of Ontario is the sole shareholder of the power company. And the company provides roughly half the power used in Ontario — the most populous Canadian province, with 14.45 million people as of Jan. 1. Ontario also has 38.7% of Canada’s population. OPG’s portfolio, according to a news release, includes 66 hydro stations, two nuclear plants, two thermal stations, and one solar facility in Ontario and the U.S.

So, to describe the proposed sale in a sentence, Cube Hydro, the owner of the Yadkin River dams, is being acquired by a large, diverse company owned entirely by a provincial government in Canada.

“If left unchecked, gerrymanders like the ones here may irreparably damage our system of government,” wrote U.S. Supreme Court Justice... read more