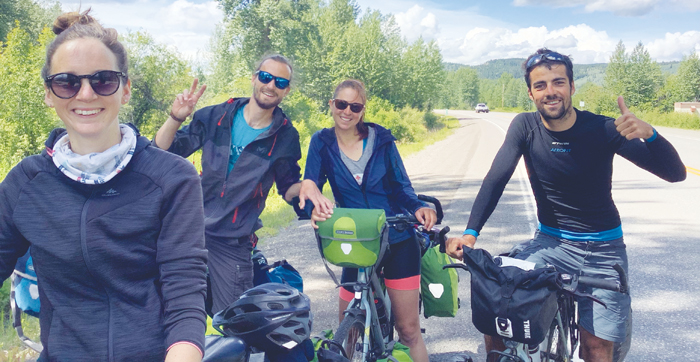 From left, Veise Laura, Jouet Remi, Datterac Nolween and David JB were on their way to Patagonia from Anchorage. David Freeze/For the Salisbury Post

Most days, as I’ve mentioned, have some good things and a few bad things.

Last Monday was up there for the most up and down of the trip so far. It was 37 degrees when I got going that morning from Burn’s Lake, Canada, with not a speck of breeze. You can decide about the good and bad as I describe them.

I had been told by Wayne Eller on Sunday in Burn’s Lake to expect a better ride Monday. The morning ride was wonderful, with no serious climbing and faint winds. I was just having a good time pedaling along ahead of pace for once.

The first community, almost a town, was Decker Lake. I didn’t see any reason to stop.

Then it was on to the village of Topley, where signs along the road said the Grizzly Adams store was open. There was another store open, but Grizzly’s place was shut tight well after the posted opening time. I get a sense that this kind of thing happens often.

After sighting a big deer walking in a creek and my first mountain range with snow in a couple of weeks, I was surprised to see two women cyclists pedaling toward me.

It turns out that they were with two guys who were riding farther back. I met David JB, Veise Laura, Jouet Remi and Datterac Noljwenn — all from France and riding from Anchorage to Patagonia. They had planned the adventure for three to four years. Completing it will take another year.

All spoke some English, and we had conversation. In fact, they were a lot of fun. They didn’t buy bear spray, but somebody gave them some.

I found it interesting that I was almost exactly halfway to Anchorage when I met them and they had started there too.

I made it into Houston, the only real town since Burn’s Lake. It was a very small town with a large car dealership and a booming 7-Eleven. I haven’t seen many that keep two cash registers going.

All the nice riding on Monday morning went the other way quickly. On the other side of the railroad in Houston, there was a steep hill to climb to leave town.

The snow-capped mountains to the west were beautiful, with white daisy green pastures in the foreground. Up and down I went until I climbed over Hungry Hill Summit. Then came a sharp downhill for several miles, which is always fun but usually sets me up for more climbing.

About 20 miles south of Smithers, I came upon a newly paved road — done with tar and gravel. If you have ever lived close to one of these, the dust is incredible afterward.

Monday was the first day that the road, Canada Highway 16, was finished. I was soon covered with a thick gravel-type dust and could taste it. When the trucks came by, I actually wanted more wind to blow the dust away.

I finally passed into the village of Telkwa, and the paving mercifully stopped. A more pleasant ride took me to Smithers, a small town that wants an identity. There must have been 10 motels in town. Even the rundown ones are trying to capitalize on the paving project, a nearby railroad project and a new Canadian pipeline that has jacked up the room rates.

It took a while to find a room.

So Monday tonight, I stayed at the Mountain View Motel, paying too much and already happy to be leaving town in the morning.

My focus once this update is completed was to get the details on the Cassiar Highway from a book called “The Milepost.’ It will help me understand how to handle five or six days in a remote place with short supplies of food and water and plenty of big animal residents.

After 92 still challenging miles, mostly because of the dust, I planned to ride up to South Hazelton and, possibly, Kitwanga — where I would begin the Cassiar Highway adventure on Wednesday morning.

The French quartet and Alfred, the German from Sunday, lived to make it through. There will be stories to tell.