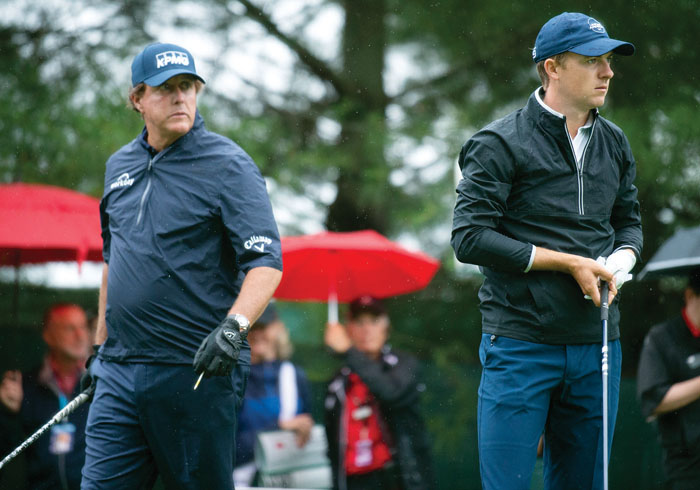 Phil Michelson, left, and Jordan Spieth watch Speith's drive from the 10th tee during the second round of the Travelers golf tournament in Cromwell, Conn., Friday, June 21, 2019 (Patrick Raycraft /Hartford Courant via AP)

By PAT EATON-ROBB AP Sports Writer
CROMWELL, Conn. (AP) — Zack Sucher found wrestling with chronic leg problems on the PGA Tour harder than wrestling alligators.
The 32-year-old from Alabama says he’s finally feeling healthy again after knee surgery sidelined him for 13 months following the 2017 Travelers Championship.
He shot a 5-under 65 in the rain Friday morning at TPC River Highlands and his 11-under 129 total held up in the afternoon sunshine for a two-stroke lead midway through the Travelers,
Sucher, who said he grew up in south Alabama doing “swamp stuff” like wrestling alligators and also played high school basketball. Chronic leg problems from that sport led to the surgery for a torn knee tendon and cartilage. Sucher worked his way back and is playing in just his fourth tour event this year. He gained a share of the lead on his final putt Thursday night and kept that momentum going with a 30 on his front nine Friday.
“It’s nice,” he said. “First year I can remember in a long time where I’m pain free and it’s feeling really good.”
Chez Reavie and Keegan Bradley were two shots back. Reavie, coming off a third-place tie last week in the U.S. Open, shot a 64. Bradley had a 66, making an eagle in the rain from about 80 yards on the par-4 15th.
“I was talking to my caddie about how wet it was and it was going to skid,” he said. “We landed a little short of where we normally would and it went right in the hole.”
Jason Day made some adjustments to his putting game after an even-par first round. He made four straight birdies after opening with a par, shot a bogey-free 63 and was among seven players at 7 under.
“Birdieing four early in my round kind of settled everything, because I was on the outside looking in,” he said.
Defending champion Bubba Watson was 5 under. He switched putters after a first-round 69 and had a 66, with bogeys on his final two holes. He had six birdies, including four in a row to start the back nine, rolling in putts from 28 feet on the 11th and 38 feet on the 12th.
“Knowing that we can make birdies in a hurry around here, you know that you have a shot,” he said. “Tomorrow, the wind is expected to pick up in the afternoon, so come up and do the same thing, shoot another 5 under. Always, 15 under is going to be around the lead.”
Brooks Koepka said exhaustion after his runner-up finish at Pebble Beach played a role in his 71 on Thursday. He shot a 66 on Friday to get to 3 under.
“I feel good and I feel like I had way more energy today which was nice,” he said.
Patrick Cantlay lipped out a 2-foot putt on 15, but made a 43-footer on the 17th to just make the cut at 2 under.
Two-time champion Phil Mickelson was among the big names left on the outside of the ropes this weekend. Mickelson, playing in Connecticut for the first time since 2003 and looking for the 45th win of his career, shot a 67 on Thursday, but had a 76 in the second round.
He hit his first tee shot onto the cart path and out of bounds to the right and then missed an 18-foot bogey putt. He hit his second shot on the 17th hole into the water and ended up shooting a 41 on his front nine.
“It was a little bit of a surprise,” Mickelson said. “I have not played great the last three months but I really keyed in on something about 10 days ago that I thought my performance at the U.S. Open and this week was going to be a lot better. Some of the shots I hit and the way I struck it yesterday, I thought I was going to have a really good day and get myself into contention, so that front nine kind of threw me for a loop.”
Jordan Spieth, the 2017 winner, shot 73 and 69 and also missed the cut.
“I just didn’t play well,” Spieth said. “No parts of my game are really where I want them to be. I’ll get some time off here, I’m not sure how much and kind of get away from the game a little bit and get a reset and try to finish the year strong.”
___
More AP sports: https://apnews.com/apf-sports and https://twitter.com/AP_Sports