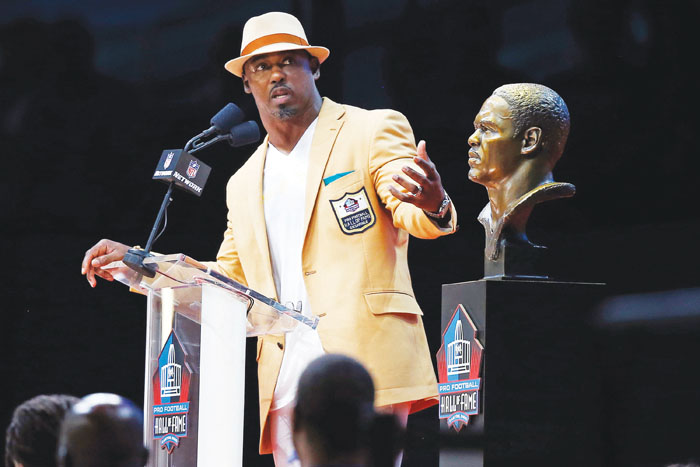 FILE - In this Saturday, Aug. 4, 2018 file photo, Former NFL player Brian Dawkins delivers his speech during an induction ceremony at the Pro Football Hall of Fame in Canton, Ohio. Brian Dawkins is tackling mental health issues the same aggressive way he took on anyone who dared cross the middle during his Hall of Fame career as a safety for the Philadelphia Eagles and Denver Broncos. Since revealing he suffered from depression and had suicidal thoughts early in his playing career, Dawkins has been on a mission to spread awareness. (AP Photo/Ron Schwane, File)

PHILADELPHIA (AP) — Brian Dawkins is tackling mental health issues the same aggressive way he took on anyone who dared cross the middle during his Hall of Fame career as a safety for the Philadelphia Eagles and Denver Broncos.

Since revealing he suffered from depression and had suicidal thoughts early in his playing career, Dawkins has been on a mission to spread awareness. He recently spoke at the Stay in the Game Forum to identify ways sports can be leveraged to have a positive impact on mental wellness. The event was organized by groups including Beyond Sport and the major professional sports leagues, including MLB, NFL, NBA and the NHL.

“We’re trying to bring awareness to something that affects 44 million people,” Dawkins told The Associated Press. “One in five adults have a mental health condition or are going through some things. I like to talk about my cerebral wellness instead of mental health. I believe we need to begin to change the narrative when we begin to speak about our cerebral wellness. I think there’s so much negativity surrounding mental health that it’s gonna be hard to take that stigma completely off, so I believe that individuals in every walk of life, you need to take control of it, take ownership of it, you change the way that you feel comfortable for yourself to talk about yourself.”

The topic hits home for Dawkins, who shortly before his Hall of Fame induction ceremony last year publicly shared the personal issues he faced. A ferocious player nicknamed “Weapon X” and revered in Philadelphia for his physical style of play and his emotional connection with fans, Dawkins talked openly about the pressure he felt as a rookie second-round pick playing for a playoff contender in 1996. That, combined with being a newlywed and a new parent, was too much for him at times. It led Dawkins to drink alcohol excessively and spiraled into a depression that made him feel like ending his life was the only way out.

“I know what it feels like, my version of depression,” Dawkins said. “The things I went through, the dark place that I went through, the times that I didn’t want to come out of my house. I did not want to leave the home. I put on a mask every day to go to work and I was pretending to be something that I was not, not in a good way, not in a positive reinforcement way of positive thinking. I was pretending to be something and covering a whole lot of pain in my life.

“So to be able to now get on out on a national scale… we’re having these conversations on how sports can be a positive conduit to help others begin to talk about their feelings, talk about the things that are going on in their lives so they can be better versions of themselves so they won’t find themselves in those dark pits.”

In May, the NFL mandated that all 32 teams must retain by the start of training camp a behavioral health team clinician focused on supporting players’ emotional and mental health and well-being. Dawkins didn’t have that option 23 years ago. His wife, Connie, and Eagles defensive coordinator Emmitt Thomas persuaded Dawkins to seek help. He began to see a psychiatrist and was prescribed medication for depression. But it was a renewed commitment to his faith that helped him control his issues.

“That is my No. 1 pillar,” Dawkins said. “That’s just the pinnacle of me, my faith, my belief in the Lord. So everything else trickles down from that concrete rock. Everything else may move. My emotions may go up and down. People around me disappoint me. But that’s something that will never disappoint me.”

Dawkins says he begins each day with prayer, scripture reading and meditation. It gives him the mindset that he will “dominate” that day.

As a cerebral wellness advocate, Dawkins is looking forward to effecting change through the Brian Dawkins Impact Foundation, which is in the planning phases of its first community initiative in his hometown of Jacksonville, Florida.

Legion baseball: Two homers not enough for Rowan at…