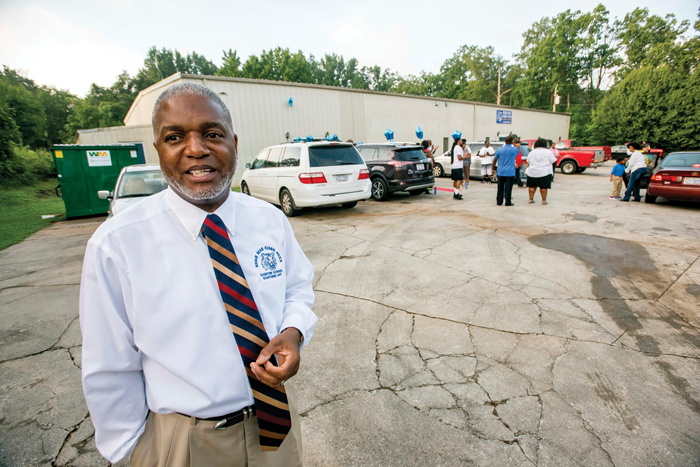 Principal Jonathan Pullin stands in front of the school while students arrive for the first day of classes. Jon C. Lakey/Salisbury Post

EAST SPENCER — Just over a month after Dr. Jonathan Pullin accepted his position as Essie Mae Kiser Foxx Charter School’s inaugural principal, he stood in the school’s parking lot and watched as its neighbor, Holmes Iron and Metal, was engulfed in flames.

What followed was a 15-hour, multi-department battle with the blaze, giving new meaning to the term “trial by fire” when it came to Pullin’s first experience as a school’s top administrator. Previously, he had served as a high school chemistry and zoology teacher following a career running his own environmental consulting firm.

Pullin doesn’t refer to his first year as principal — also the school’s first year in existence — as a trial by fire. Rather, five days following the 2018-19 academic year he sat in his office, cross-legged in a polo, shorts and sandals — a change from his usual suit and tie — and summed the school’s first year up with seven words — “It was rocky and tenuous — at times.”

The keys to that statement, he said, are the words “at times.” The hurdles of Essie’s School’s first year in operation have brought about big growth and even bigger plans for 2019-20, Pullin said.

“Overall, the school has matriculated into what our vision and mission set out to accomplish,” Wallace said. “We definitely still have some growth for the next year but we’re off to a wonderful start.”

While the vision of Essie’s School had been on the hearts of East Spencer community members for years, the months leading to the charter school’s grand opening happened in near double time.

“It was a Herculean effort just to get the doors open,” Pullin said.

The North Carolina Charter Schools Advisory Board approved the school’s application in May 2017, with a North Carolina Board of Education approval following shortly thereafter.

The building is owned by the Church of God of Prophecy and had been used throughout the years as a daycare and the site of the former Rowan Academy charter school. It was zoned residential.

East Spencer town board members approved a conditional-use permit for the site in early June 2018, with a plan that the school would lease the space for a minimum of two years before deciding whether to expand on site or explore a permanent home elsewhere.

But the mid-year approval would pose a mountain of last-minute logistical challenges as Pullin hired an entirely new staff from the ground up — six teachers, seven teachers assistants, two administrators, a custodian and a bus driver.

“Hiring a new staff is a huge undertaking,” he said, “because you’re trying to put together the skill set and the personality of culture that you want to develop in your building.”

The effort was a bit like putting together a puzzle, he said, referencing the limited hiring pool of teachers come mid-summer.

“It wasn’t hard, it was just solving a problem,” he said.

Other logistical challenges included planning transportation and food services for the 162 students who had registered for enrollment. Though just 102 would show up for the first day in late August, roughly 50% needed transportation and all would be offered breakfasts and lunches entirely free of charge.

Transportation for an open-enrollment site meant bus stops were divided into hubs across the county, and meals were provided through an outside catering organization.

As fast as those final few puzzle pieces came together to get Essie’s school off and running, so too would come the first few bumps along the road. Between August and December, the school lost four staff members — a first-, third- and fourth-grade teacher and a curriculum specialist.

Refusing to speak ill of any member of the mass exodus, Pullin simply said, “They were looking for something different than what we could provide.”

And he took the hit in stride despite its impact — three teachers represented represented 60% of the school’s lead instructional staff for its five grades, kindergarten through fourth, with only one classroom of each.

“Turnover is a part of any business culture,” Pullin said. “The key is to be able to lose individuals yet keep moving forward.”

This hierarchal model of general school encompassing a lower K-2 and upper 3-4 school provided the structure Pullin said was needed to get Essie’s school “where it should be academically.”

This school restructure, combined with a universal schedule for core coursework and Pullin’s hands-on involvement in and out of the classroom, would lead to marked gains.

“We’re a totally different school than we were in August,” said Pullin, speaking on comprehension and behavior among students. “Students act out when they can’t understand what you’re trying to teach them. Our main focus has been reading as it is the basis of all other learning, and our teachers have been really into it.”

Essie Mae Kiser Foxx Charter School closed the 2018-19 school year with 85 of its initial 102 students remaining, with Pullin citing the high mobility of families in Rowan County as cause for the shift.

The problem of familial transience is seen in schools all across the Rowan-Salisbury school district.

“People come to charter schools expecting a panacea,” said Pullin. “But we have the same identical problems you see everywhere else, just on a different scale.”

But, with a year behind them and a reputation established, Pullin said he was confident growth was coming. The school is planning for 220 slots next year with the addition of a fifth-grade classroom.

Board President Wallace agreed, saying that the school had already made strides toward building a positive reputation within the Salisbury and East Spencer communities.

A  great portion of this was done through positive community partnerships, Wallace and Pullin said. Essie’s school was in constant communication with local colleges to identify the needs of the workforce of the future.

“Their world won’t be the same as ours,” he said. “We have to start the conversation, use the language of technology. Our vision to be a STEM school means nothing if we’re not able to converse about it.”

“They’re really the unsung hero in all of this,” said Pullin of Holmes. “They made sure we were good at all times. They’ve been phenomenal neighbors.”

With community organizations on board, Essie’s school will continue its momentum forward. The goal is to become a K-8 site, and two mobile units from Henderson Independent will be relocated to its campus next year.

The school is also looking at buying a bus rather than using its current lease, and several technology upgrades for the fall.

A focus on impacting the East Spencer community remains central.

This means school board staff is exploring community outreach efforts such as making the school a satellite GED program through Rowan-Cabarrus Community College or continuing to provide dental services for students and families.

It was all about meeting the holistic needs of the students and families that Essie’s School served, said Wallace. Pullin agreed.

“If you can do those few things, you can change a community,” Pullin said.

For more information or to apply for the 2019-20 school year, visit www.essiesschool.com.