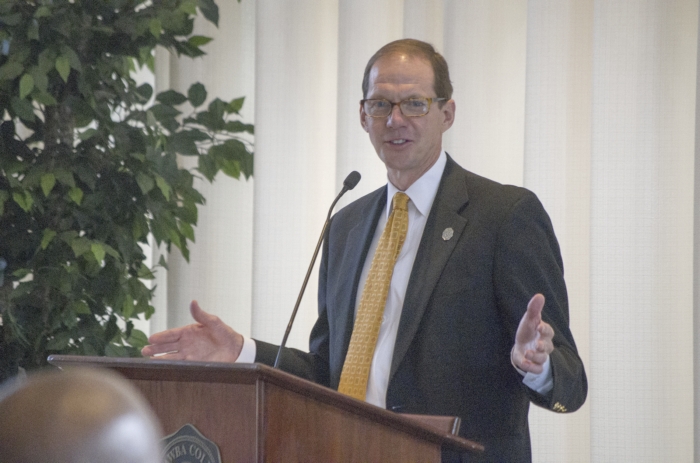 SALISBURY — Since its launch in 2016, grassroots Salisbury nonprofit ApSeed has distributed 5,300 free, literacy-developing tablets across Rowan and Davie counties.

But the number, said founder Greg Alcorn as he addressed members of the Salisbury Kiwanis Club on Friday, represented just a fraction of what he called the organization’s “BHAG” — big hairy audacious goal.

“Our goal is to reach all of North Carolina, all 300,000 children ages 0 to 4 in economically challenging situations,” he said as he detailed just where the company was in its path toward accomplishing this objective.

According to Alcorn, the journey toward developing ApSeed began shortly after his 2013 appointment to the North Carolina Board of Education. He was new to the world of education, he said, and as such was quickly inundated with stark statistics regarding high school graduation.

As a business person, one particular statistic struck his interest: on average, a high school graduate will make $10,000 more per year than someone without their diploma, he said.

So he and his wife made a decision: “We said, ‘Let’s do something in life that can make a significant difference toward that,'” said Alcorn.

The pair contemplated serving many different age groups before finally identifying the ideal target market: something Alcorn referred to as “pre pre-K.”

Again, he said the decision related back to his business mindset and studies detailing the marked returns on investment for pre-k.

Together with Erik Lipscomb and through consultation with Apple, Alcorn developed the tablets, called seedlings. Today, the devices are distributed with 16 applications that promote recognition of letters, numbers, shapes and colors — all foundational elements of early literacy.

The seedlings are currently offered through local hubs such as Partners In Learning, Head Start, day cares and the WIC department, with a particular focus on those in the lower socioeconomic spectrum.

And the organization is close to its first goal of saturating the 0- to 4-year-old demographic in Rowan County, said Alcorn: “It took us 15 months to go from giving out 25 to 50 a day to last week, at the WIC program, we gave away four.”

Through private funding, the nonprofit has been able to expand into neighboring Davie County and is soon to offer seedlings in two South Carolina counties.

But the hope is to secure public funding to go even bigger, Alcorn said. Local Representative Harry Warren, R-76, has sponsored a bill that would fund the program in an additional five counties, helping bring ApSeed to an additional 22,000 children.

The bill, House Bill 327, was not yet in the state budget, but Alcorn said the group was “lobbying hard.”

“If they don’t fund us, we’re moving on; we’re not waiting,” he said. “But eventually we’re going to really need public funding to go big.”

The nonprofit was also exploring different capacities for seedlings, such as offering bilingual programming or applications that provided parental support.

But the overall focus of the devices would remain the same: increasing kindergarten performance and early literacy.

“The ApSeed reader actually really matches up to … the mission of Kiwanis of helping children,” said Alcorn shortly before receiving a $1,000 donation from the Kiwanis for ApSeed. “It’s a method of being able to help children … birth to kindergarten, to prepare them to learn how to read, to prepare them to be successful in kindergarten.”

These early improvements and the resulting returns on investment would have generational impacts on North Carolina’s educational system and beyond, Alcorn said.

“We want to prepare more children for kindergarten and have our elementary schools get A’s and look better in the eyes of future evaluators,” said Alcorn, “Because if our schools look better, that’s where people want to be.”