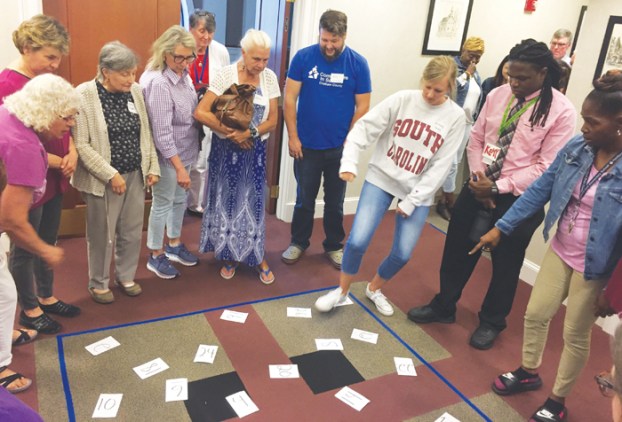 Communities in Schools volunteers and staff practice a group activity used in the WhyTry program to get students talking. Andie Foley/Salisbury Post

SALISBURY — Without context, a peek into the upstairs board room of the Rowan County Chamber of Commerce building on Thursday may have raised a few eyebrows.

At a collection of tables throughout the room, a mixture of Communities in Schools staff members, volunteers and school personnel had divided into pairs.

One person leaned forward, listening and engaged. The other sat in varying stages of disconnect: slouching in the seat, arms crossed or eyes averted as the gathered professionals emulated the group they were targeting: elementary through high school students struggling to achieve.

Thursday’s role playing by educators was one of many activities in a two-day training session on mentorship and building resiliency through a program called WhyTry.

Ron Turbyfill, executive director of Communities in Schools, said the training was offered through a $10,000 grant from Novant Health. He selected the training after a poll of the organization’s volunteer tutors, he said.

“I did a poll last January, and I asked, ‘What would you like more training in?’ Tutoring in reading, writing, math or mentoring?'” said Turbyfill. “Mentoring came up No. 1.”

Turbyfill said he was familiar with the WhyTry program because a former Communities in Schools employee, Bob Foreman, had been trained under the model. The training offers the tools and format needed to build valuable mentoring skills, he said.

According to WhyTry trainer Kemy Joseph, the program began in 1996 when a college professor asked founder Christian Moore how he had come so far academically despite seemingly insurmountable challenges.

At the time, Moore was working toward a bachelor’s degree, having graduated with just sixth-grade math abilities or seventh-grade reading and writing skills.

In thinking of his answer, Moore realized his continued academic journey in the face of struggles had come down to one key question: Why try?

The question would lead him to develop the curriculum and training now 20 years in use in schools across America. The WhyTry program helps students identify individual motivators that will keep them on the pathway toward success — whatever that looks like.

But, said Joseph, a critical component is realizing that resiliency does not mean success from a traditional standpoint of high academic achievement.

“Some of our kids who are really resilient are not the ones who you might consider academically successful,” he said. “But these kids are going through the fire every single day and coming back to school. That’s a huge thing to celebrate, and that’s one way that they are being successful.”

The key is to hone in on resiliency to keep kids persistent through life challenges at home, among their peers, and throughout their academic journeys.

Jane Patterson, a Communities in School student support specialist at North Rowan Middle School, said the training is one of the best she’d attended in over 30 years as an educator.

She sited the resources offered — analogies, worksheets, group activities and more — would work to get students to understand their struggles and the barriers keeping them from success.

“I used to dread trainings that the school system would send us to,” Patterson said, speaking of her time as a teacher before retirement. “This I can see myself using, and I can see students being able to return to.”

Communities in Schools is a member agency of United Way of Rowan County.