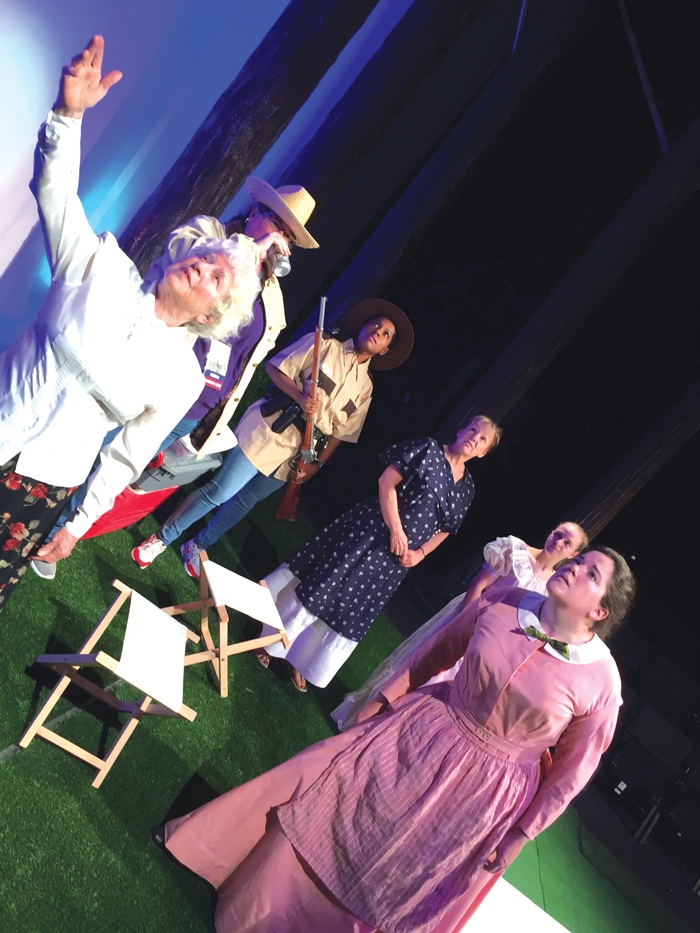 The cast of 'Shiloh Rules' in rehearsal

“Shiloh Rules” could be subtitled “Historic re-enactors gone wild.” The comedy, produced by St. Thomas Players at Lee Street theatre, concerns six women, four of whom are re-enactors and one firmly planted in the real world as a park ranger.

The other one — well, she’s a bit of a mystery.

The comedy comes, first, from re-enactors who aren’t quite into their roles yet. They can’t use words like “car” or “visitors center.”

Then there’s the clash between the federals and the rebels, and that park ranger trying to maintain order.

Bentley is eager, ready to pull out her pistol and join the fight. She’s so eager that she sometimes lets modern concepts slip in. Her rebel character is a young woman who, naturally, can’t read. No girl child had time for schooling during the war, or any other time, for that matter.

But what LucyGale really wants to do is join the fight. Take off her patchwork dress and put on a soldier’s uniform. When that eventually happens … well, you have to see it.

Jones plays a character who is at all the re-enactments, it seems. Many claim she has no real name or driver’s license. That she travels from camp to camp, always in character. Jones has an ethereal quality here that makes the mystery believable.

Clara Mae Abbott, a nurse, is joined by Meg Barton, her assistant. Linda Smith is Clara and Elizabeth Smith is Meg, who must be reminded repeatedly that she is in character and cannot use modern medical terms. Linda Smith plays the tough battlefield nurse with gritty determination and loud patriotism. Elizabeth Smith does a good job of being a green-horn re-enactor and then one swept up by the spectacle.

Denise McKercher is Widow Beckwith, who’s half in a costume, but she’s lugging a cooler and plastic storage bins. She’s the official authenticator for the re-enactment, but she also sells soda, beer, chips and ill-gotten artifacts. McKercher gets into her role as a person half into and half out of the action.

Terri Montrel is so strong as Ranger Wilson. First she’s trying to keep order with LucyGale, Cecilia, Clara and Meg, who have all arrived far too early for the battle, which is supposed to start at 8 a.m. When she catches Widow Beckwith with an unsecured knife, beer and those questionable artifacts, she writes citation after citation and threatens to toss her out of the park altogether, which could mean she’d be banned from future re-enactments, and this is her livelihood.

Montrel also expresses her distaste for resurrecting the Civil War and refighting battles. She doesn’t feel particular kindness to the Yankees, either, who say they’re fighting for the good cause, to end slavery and restore order to a young country. And she has no love for the Rebels, either. She just wants the whole thing to be over and for these people to get out of the park.

When the battle does begin, be prepared for the sound of explosions, gunfire and cannons. It gets pretty loud. And then there’s a thunderstorm and a shooting, as the nurse turns on a soldier.

But do take note of the “ghosts” who appear periodically before, during and after the show. The clever use of a fog machine and lighting creates quite the atmosphere for the fantastic set, which re-creates the burials of Shiloh and the forest with authentic branches and captivating lighting, thanks to director David Pullium’s set design and Rod Oden’s lighting and sound design. Oden is executive director of Lee Street.

Nancy Gaines did the costume design, which required authentic clothes of the period and a variety of hats.

The combination of good direction, design and performances makes for an evening of laughs and serious thought. The ending is a special moment.

Children might be alarmed by the loud noises and may not understand what’s re-enacting, what’s acting and what’s real. Any audience member might have to think for a minute or two at certain points to keep up with what’s what, but that’s part of the experience.

With one 15-minute intermission, the play is a little over two hours.