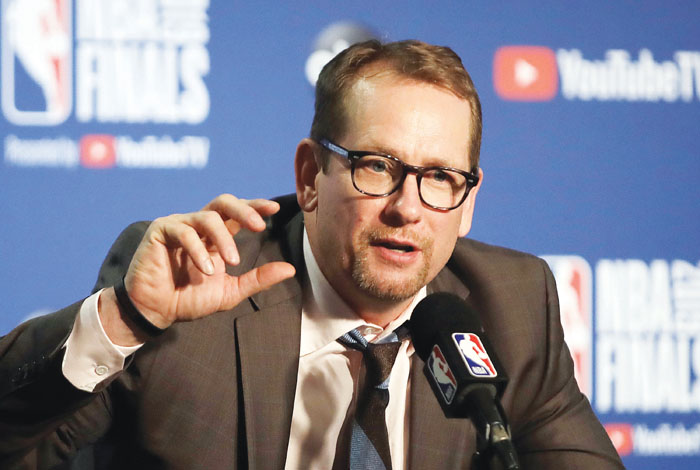 OAKLAND, Calif. (AP) — Toronto coach Nick Nurse plays to the beats to his own drum.

And that’s not even one of the instruments that he’s messing around with these days.

Nurse’s office in Toronto has a guitar stand on one side of his desk and a piano on the other. He’s trying to master both; the guitar travels with him on the road and he’s been known to strum it while studying film. The piano doesn’t exactly fit in the overhead storage bin of the plane so it stays behind.

Nurse says he’s not any good yet.

His team, however, is making plenty of beautiful music so far in these NBA Finals.

The moment has not been too big for Nurse or the Raptors. They lead the title series 2-1 after a 123-109 win over injury-depleted Golden State on Wednesday night, an outcome that puts the two-time defending NBA champions in trouble. The maestro of the best season in Toronto history is a 51-year-old NBA coaching rookie, one who’s making plenty of right moves.

Nurse might have been an unknown to casual NBA fans when he got the job a year ago following the firing of his former boss in Toronto, Dwane Casey. Nurse was an assistant on Casey’s staff, largely credited with running things on the offensive side of the ball. He had good relationships with players, but the task of replacing someone who was the NBA’s coach of the year and got fired anyway was daunting nonetheless.

He has handled it with ease.

“Each game’s critical, and the next one will be as critical as (Game 3) was,” Nurse said. “So it’s been like that all through the playoffs, and we just got to guard and play who is out there. That’s all we can do.”

The guy he’s going against has eight rings already. Steve Kerr won five as a player, has three more from his first four seasons as coach of the Warriors and still very much has a chance at a fourth in five seasons.

But this is no coaching mismatch.

“I’ve watched Nick closely,” Dallas coach Rick Carlisle, the president of the National Basketball Coaches Association, said earlier in the series. “We played against him twice this year. He’s terrific in making adjustments and I love the way he’s approached the entire season. They have set up the entire season to work to get to this point and for a first-time NBA head coach, that’s not easy to do.”

For a first-timer, no, it wouldn’t be easy.

Thing is, Nurse is no ordinary rookie.

He’s won championships — four of them, two in the British league, two more in what’s now called the G League. That’s not the NBA, of course, but there’s a progression that he’s followed, a long slow path that saw him coaching teams most people have never heard of like the NAIA’s Grand View University, Telindus Oostende in Belgium, the Oklahoma Storm of the USBL.

He got tons of attention for throwing a box-and-one on Warriors star Stephen Curry late in Game 2 of this series. Some would say that’s an unconventional move. Not for Nurse. He spent one season basically full-court pressing the whole time so he could collect the data. He’s been known to count certain shots in practice as 4-pointers, to emphasize the need for proper spacing.

The lab on Wednesday night was Oracle Arena. The Raptors survived a 47-point night from Curry and prevailed over a Golden State team without Kevin Durant, Kevon Looney and Klay Thompson. Looney’s season is over. Durant may be back for Game 4. Thompson figures to be back. The Warriors are almost certainly going to get boosts.

It’s still too early to tell whether Nurse and the Raptors can pull this off.

“His mind for the game has been special, and the growth throughout the year has been pretty good for him,” Lowry said. “He’s not a first-time head coach — he’s a first-time NBA head coach. But the experience that he’s had in his many leagues and teams that he’s been a head coach before, he’s kind of just kind of stepped up and continued to grow with that.”