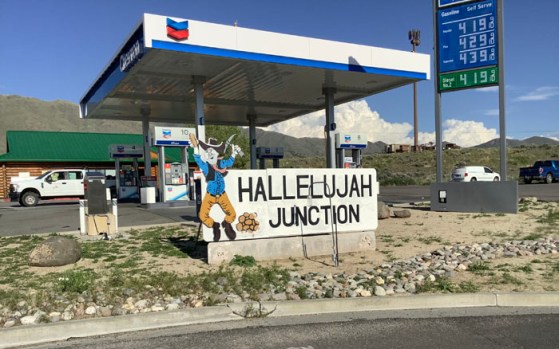 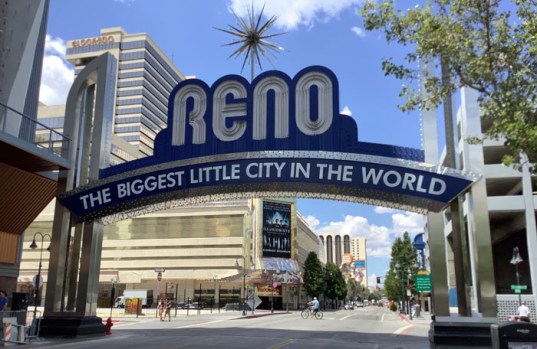 Reno is known as the "Biggest Little City in the World." David Freeze/For the Salisbury Post

As most of you know, I like an adventure. I got off to an amazing start on my trip from Nevada to Alaska with Tuesday’s ride.

I had been in Carson City, Nevada, for several days and participated in the Reno/Tahoe Odyssey, 178 miles from Reno to Lake Tahoe and back. (More about that later in a Gotta’ Run column.)

I left Carson City about 10:30 a.m. Tuesday and arrived in the unincorporated community of Doyle, California, late Tuesday night.

For several days, I had been chasing a lead on camping or a motel room in the area. No other towns are close, and options were slim. If the rest of this trip is as amazing as where I slept Tuesday night, we are going to have some fun as the quest for Alaska develops.

After a step climb out of Carson City, I had the most pleasant ride into the early afternoon. Most of it was on Old Nevada 395. There were snow-capped peaks to the left, a river and farm fields to the right, and a mostly flat road. Interstate 580 paralleled 395 and, thankfully, took most of the cars. It was a stunningly beautiful ride of about 25 miles to Reno, publicized as the Biggest Little City in the World.

After passing quite a few gambling casinos and high-rise hotels, I pedaled the length of Virginia Street, the main drag. Bike lanes and bus lanes made for an easy ride through a bustling downtown.

On the northern side of Reno, several steep hills and a rush of traffic early on made for a much different ride. A wide shoulder worked well, but the challenge was crossing the off ramps and entrance ramps. Most required stopping the bike and running it across those lanes when a small opening appeared.

I crossed into California and was surprised there were no more hills. All traffic was funneled into an inspection point, but the officers waved me through. The last supply point before Doyle was a place called Hiawatha Junction. I stopped at a convenience store to fuel up against consistent headwinds and more hills. Plus the sun was warming up.

While there, I asked the clerk what it would cost for a large cup of ice. His response was, “Nothing if you have your own container.” I got plenty of the best crushed ice. This used to happen often but not so much lately.

Suddenly, the hills were gone and the clouds covered the sun. Surprisingly, the winds abated, too. The last 20 miles was nearly perfect.

I found Doyle and the campground/RV park where I hoped to spend the night. I also found Pamela Wells, who got the owner on the phone and helped me work out a campsite. The owner said I could camp for free on the other side of a camper but that she would charge me $20 if I wanted power. The camp didn’t have a picnic table, and it was on gravel. The fun was building.

The owner didn’t want us to move the park’s only picnic table, but it also seemed to weigh a ton. My idea was to sleep on it and not take the time to set up the tent, which would provide a fast getaway in the morning.

Nora Lynn Bobillot came up with the solution. I slept in her pickup bed — complete with couch cushions. Wells and Bobillot were wonderful. As soon as I finished this report, I headed for my sleeping bag in that truck.

Meanwhile, my cellphone was charging in the clothes-washing area. I didn’t need that power after all. My meal Tuesday night was a day-old veggie burger that was wonderful.

It was near dark when I got here, and it had been a long day that included 74 cycling miles. I had no idea where I was going next, but I figured it out as the day progressed. I will stay on 395 and make it as far as I can.

Two new sponsors are onboard — Mission Senior Living from Carson City and Vac and Dash of Albemarle.

It feels great to be back on the bike and chasing another dream. Feel free to stay in touch at David.freeze@ctc.net.

I love to hear your thoughts and experiences with the areas I am about to travel into.

Keep sending those prayers, too. I heard Tuesday morning that bears will leave me alone if I don’t have anything freshly cooked. I can do that. I plan to scare them off with my singing as a last resort.

David Freeze is a contributor to the Salisbury Post. He’s biking from Nevada to Alaska.