Duking it out: Past Duke teammates Boutier, Liu tied at US Open 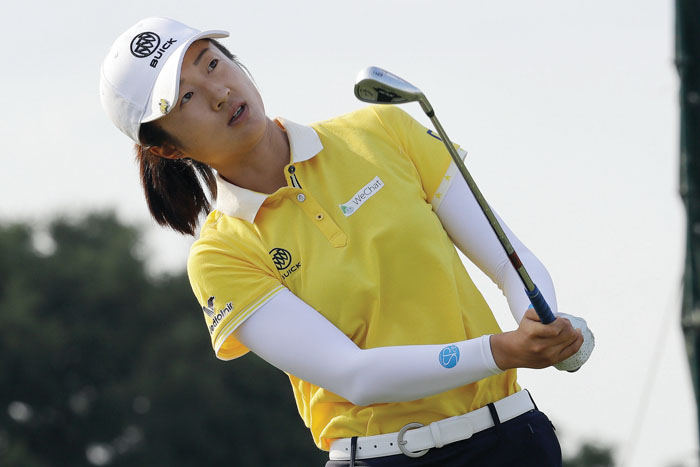 Yu Liu of China,, hits the ball from the 17th tee during the third round of the U.S. Women's Open golf tournament, Saturday, June 1, 2019, in Charleston, S.C. (AP Photo/Steve Helber)

CHARLESTON, S.C. (AP) — Former Duke championship teammates Yu Liu of China and Celine Boutier of France were tied for the lead after three rounds of the U.S. Women’s Open.

Liu had a 5-under 66 to match Boutier at 7 under at the Country Club of Charleston. Boutier shot 69.

The pair of Blue Devils, good friends and starters on the 2014 NCAA championship team, were a stroke in front of Lexi Thompson, Jaye Marie Green and Japan’s Mamiko Higa, the surprise leader the first two rounds.

Boutier held the lead at 8 under until she made her only bogey of the round on No. 16 after stubbing a chip and needing a 21-footer to limit the damage. She won the Vic Open in February in Australia for her first LPGA Tour title.

Liu, in her first U.S. Women’s Open, made six birdies in a 13-hole stretch to move up after starting four shots off the lead. She’s winless on the tour.

Thompson powered her way into contention, going eagle-birdie on the 15th and 16th holes for a 68.

Green shot 68, her second sub-70 showing this week after entering with just one round in the 60s in five Open appearances.

Higa had an up-and-down round of three birdies and three bogeys to lose the lead she’s held much of the week. She finished with her second straight 71.

Boutier had a 25-foot birdie try on the final hole, but went a foot or so past and finished with par to close a long day on course.

Boutier was among 45 players who couldn’t finish the second round Friday because of a weather delay and had to return before sun up to complete four holes before turning her focus to the third round.

But Boutier stayed patient — and pounced when her opportunities came. She had a 10-foot birdie on the ninth to tie Higa, then moved ahead with a 12-footer for another birdie on the 13th.

Boutier’s bobble came one of the holes playing the easiest, the par-4 16th when her approach went over the green and she advanced her third about two feet before sending the next one some 20 feet beyond the flag. Boutier rallied once more with a solid, confident stroke for bogey and hold on to a share of first.

The 23-year-old Liu had few expectations playing her first U.S. Women’s Open and fell five shots off the lead with a bogey on No. 3. But Liu had six birdies the rest of the way and will play the final group with one of her best friends on tour.

“We probably won’t talk much,” she said with a laugh.

Thompson, who tied for fifth in this event last year, looked like she was fading with consecutive bogeys on the 10th and 11th holes to fall five shots behind. She rallied by reaching the par-5 15th in two and making a 30-foot putt for eagle. Her approach on the next hole landed five feet away for a birdie that left her a stroke in back.

Thompson has 11 top 10s in majors since her lone victory in the 2014 Kraft Nabisco Championship, now called the ANA Inspiration. She said staying calm after the back-nine bogeys helped her stay in contention. “It’s tough not to let it get to you, but at a tournament like this, you can’t,” she said.

Higa was the tournament’s stunning storyline early after shooting a 65 Thursday — the lowest debut ever in the U.S. Women’s Open — then notching three birdies in six holes after a two-hour storm delay to keep her lead.

But bogeys on the seventh, 10th and 12th holes knocked her back. Higa recovered with a birdie on the 14th and parred home to stay in contention.

The course was far from quiet overnight. Workers removed a large tree between the 18th fairway and 11th green that was struck by lightning during Friday’s weather delay. Crews were cutting and grinding late Friday. By the start of play Saturday, only a pile of decorative wood chips remained.