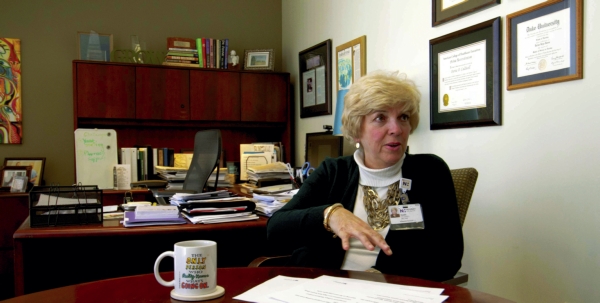 Caldwell has served in the top spot at Salisbury’s hospital for nine years. After her departure, Gary Blabon will become interim president and COO. Blabon currently is the senior director of professional and support services at Rowan Medical Center.

Caldwell’s new role will be vice president of the Novant Health Foundation, where she will focus on fundraising in Rowan County and beyond, a news release stated.

“We are appreciative of Dari’s many contributions to Novant Health, and we are proud to have her serve in this new role,” said Jesse Cureton, executive vice president and chief consumer officer for Novant Health. “Her new role offers the opportunity to continue to support our Rowan County community while raising much-needed funds for patients and programming in all of the communities we serve.”

In a Facebook post about her career move, Caldwell said she plans to remain in Rowan County and be involved with fundraising for the local hospital, saying the move is “the best of all worlds.”

“I am ready to learn new things and move a little closer to retirement,” Caldwell wrote.

During Caldwell’s tenure at Rowan Medical Center, a news release said, the hospital achieved significant growth and brought needed services to the community, including opening the Glenn Kiser Hospice House. Rowan Medical Center remains fully accredited by the Joint Commission and has earned some of the nation’s top honors in quality care, including stroke center certification, chest pain center accreditation, baby-friendly designation and others, a news release stated.

The team has also reduced hospital-acquired infections by more than 70% in the past 18 months. Serious safety situations were reduced to zero, and the hospital team continues to see reductions in its 30-day readmission rates.