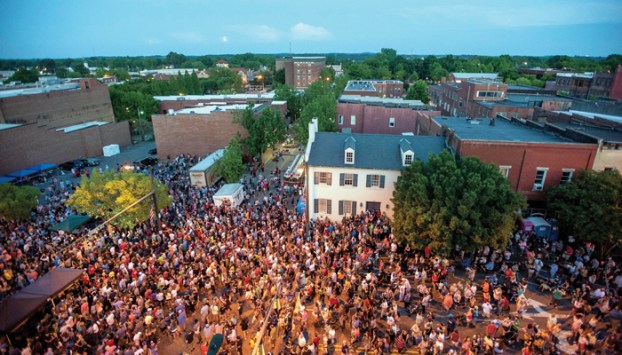 The crowds ebbed and flowed all day on May 20, 2019 during the third Cheerwine Festival. The final band of the day, Smash Mouth, drew a large crowd for the free outdoor concert on North Main Street. Jon C. Lakey/Salisbury Post

SALISBURY — The streets of downtown Salisbury were filled to overflowing on Saturday with a sea of Cheerwine — Cheerwine enthusiasts, that is.

According to Salisbury Parks and Recreation Director Nick Aceves, at least 50,000 people turned out for the third annual celebration of Salisbury’s own cherry soft drink. He called the number a conservative estimate, as public safety officials have estimated as many as 60,000 were in attendance.

“From the Fire Department, how they estimate the size of crowds, they’re calling it right at 60,000,” said Lt. Lee Walker of the Salisbury Police Department. “I ain’t never seen that big of a crowd in downtown Salisbury.”

“It felt like there was space to move last year,” he said. “Many times this year, it was shoulder to shoulder.”

Estimates, he said, were factored by taking data from prior years and allowing for growth. This was then combined with the footprint of the festival and the average number of people in a given area.

But large-scale, non-ticketed events like these are harder to estimate than others, he said, a sentiment that Rowan County Tourism Development Authority CEO James Meacham echoed.

Without these direct measures, the true economic impact of the 2019 Cheerwine Festival hasn’t been determined, he said. One could speculate an average of $10 to $20 spent per person, but even that presents a challenge of local versus nonlocal influence, he said.

“If a local comes to the Cheerwine Festival and spends $50, that money isn’t new to Rowan County,” he said. “This is opposed to someone who drove in from Davidson who would be bringing new money in.”

On the public safety side, Walker said the festival was “fantastic.”

“We had no incidents, which kind of shocked me. … The more people you have, the more chance you have for people to get hostile.”

At least 75 officers were at the festival throughout the day, he said. Some came from Davidson County, and the Raleigh Capital Police provided a bomb-sniffing dog.

The greatest worry for a large-scale event like the festival is an active shooter, he said. Accordingly, carrying weapons openly was not permitted, and the police escorted five people out who were doing so.

Most of the emergency-response incidents were for those suffering from heat exhaustion, he said.

The city’s event coordinator, Vivian Koontz, said the city and its partnering host, Cheerwine, are already looking ahead for a 2020 festival, to be held May 16. Planners and coordinators met until 1:45 in the morning following Saturday’s festival to begin discussions for next year: what will be done differently and the triumphs and trials of the festival.

“When planning this event, I have to keep two organizations in mind because it’s a partnership with Cheerwine,” said Koontz, “If Cheerwine is happy and city officials are happy and we see tons of smiling faces, … that’s my triumph at the end of the day.”

Aceves said as talks begin for next year, planners are trying to identify the right main act to follow this year’s headliner, rock band Smash Mouth.

Organizers are also already seeking volunteers for next year, he said. Those interested can call event coordinator Vivian Koontz at 704-638-5294 or email vkoon@salisburync.gov.

Koontz, whom Aceves credited as a key factor in the festival’s growing success, said the biggest goal in planning the festival is encompassing as much of the heart of downtown Salisbury as possible.

She said that effort is being noticed by festival-goers, vendors and downtown business owners alike.

“Everybody has been really happy that this community finally has something big that is drawing folks in, that we can be proud of and show off,” she said. “We want to make this event a full showcase of what Salisbury has to offer in addition to Cheerwine, to show off our city and brag about the good things we have here.”

A Rural Hall man was injured Monday in a mountain bike accident, according to Locke Fire Chief Rusty Alexander. The... read more