Steelers’ Big Ben is eager to move on 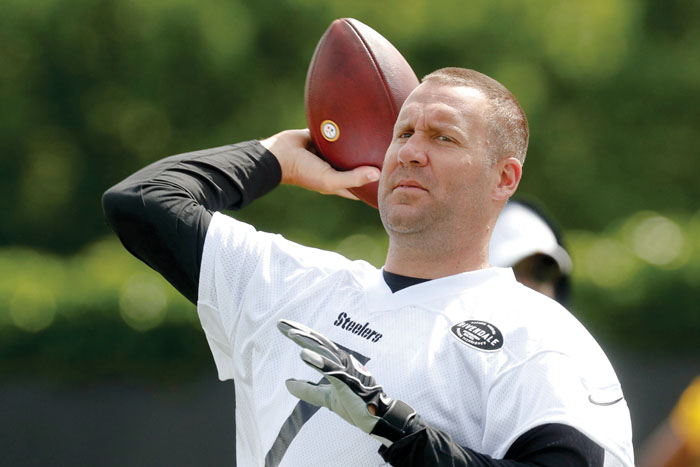 Pittsburgh Steelers quarterback Ben Roethlisberger (7) throws the ball during an NFL football practice, Tuesday, May 21, 2019, in Pittsburgh. Roethlisberger received pointed criticism from former teammates Antonio Brown and Le'Veon Bell among others during the offseason, both of whom took shots at Roethlisberger's leadership skills. Roethlisberger says the criticism bothered him but he's eager to move forward.(AP Photo/Keith Srakocic)

PITTSBURGH (AP) — Ben Roethlisberger heard the noise. How could he not? At times, it was deafening.

Antonio Brown. Le’Veon Bell. A handful of other former teammates long since gone from the Pittsburgh Steelers locker room. The talking heads on TV. They all came for him in some form or another during a turbulent offseason, questioning everything from his character to his decision making.

The typically social media-averse Steelers quarterback heard it all. And yeah, it got to him.

“When it affects your family then it can definitely affect you,” Roethlisberger said on Tuesday as Pittsburgh began organized team activities. “So things bother you, you think about it, but you also have to understand that we live in an amazing country, that we have opinions and people can say what they want and you just have to really focus on the guys that are here, and just make sure that they’re good and everybody I’ve talked to is good with me.”

That would be a stark departure from the end of 2018, when Brown basically quit on the team before a must-win regular-season finale against Cincinnati, then spent the ensuing two months doing what he could to force his way out of town. That included taking a flamethrower to his prolific if occasionally problematic relationship with Roethlisberger. At one point Brown said he felt Roethlisberger had an “owner mentality” — a sentiment Roethlisberger admits he didn’t quite understand — before eventually being traded to Oakland.

The rapid decline of the most successful quarterback/receiver combination in franchise history caught Roethlisberger off guard. He says he tried repeatedly to reach out to Brown, but the All-Pro who had a picture of the two next to his locker that included a note from Roethlisberger that read “AB, we are unstoppable,” opted not to respond.

“Sent him texts, sent him calls, this was all before the season was over,” Roethlisberger said. “Never heard back so I could never really find out what was going on. For me, that’s why it was so confusing because I didn’t know where it came from.”

Call it part of a busy few months in which Roethlisberger felt the Steelers were “attacked from all different angles.” Not that it matters now. Brown is in Oakland. Bell signed with the New York Jets, and Roethlisberger and the other 89 players on the roster are only too eager to move on.

While Roethlisberger acknowledged being blindsided a bit by the torrent of criticism, he did allow the critics may also have a point. He served as the quarterback of a team that started 7-2-1 only to miss the playoffs for the first time since 2014. By that metric, he failed as a leader.

“When it comes to leadership, we didn’t make the playoffs last year,” he said. “We didn’t win our division. So I lacked in leadership because that’s my job as the leader of this team is to get us to the playoffs, so I’m going to focus and refocus my energy and time on how can I be a better leader to get us back to the playoffs.”

That includes being a regular at OTAs. Roethlisberger appeared only sporadically last spring, as did Brown. But with so many new faces on offense, Roethlisberger figures he needs to be a fixture, particularly after signing a contract extension last month that runs through 2021. The 37-year-old says he plans to play for the entirety of the deal.

“I know I talk about season by season because of injuries, there’s things you just can’t foresee,” he said. “But in terms of, you know, my commitment to the Pittsburgh Steelers, it’s three years and I’m going to honor that.”

Bell’s and Brown’s departures could be addition by subtraction, at least off the field. Defensive end Cam Heyward wished both players “nothing but luck,” but said his focus has turned to the guys he’s currently working alongside, not the ones earning paychecks elsewhere.

Asked if the last couple years were emotionally exhausting, Heyward laughed, let out an exaggerated “whew” then added “plenty.”

That shouldn’t be the case this season.

Roethlisberger, who has been known to publically tweak teammates for substandard play while also pointing the finger at himself, is re-evaluating the way he builds relationships. Yet those who have played with him the longest say it’s not on Roethlisberger to singlehandedly revamp the locker-room culture.

“Ben is a guy that’s going to come in and do his job,” guard Ramon Foster said. “He’s going to be the guy. I don’t just want to say, ‘Yeah, there’s (going to be) a dramatic change’ because then it seems like there was a terrible problem. Just watch him. You guys will be able to tell.”