Ask Us: What is the plan for the county-owned land north of the fairgrounds?

A reader asked for details about land being cleared near the Rowan County Fairgrounds, whether it would replace a field previously used for parking and other details.

The fair is using county land for parking, as land formerly used for parking across Julian Road is the site of the new James River Equipment facility.

The land to be used in the future for parking is north of the fairgrounds and south of Rowan-Cabarrus Community College. It is landlocked, having no street address, and between 20 to 25 acres. This land is still owned by the county and being leased to the fair association. 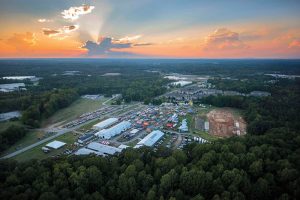 The goal is to have parking on the same side of the road so that it is safer for pedestrians, Love said.

Love said the fair association also is repurposing and grading the demolition derby track to use for parking. This is roughly 5 acres and will be used for parking for roughly 500 cars — estimated to fit 100 cars every acre. This transition of the derby track to parking is, in part, to replace parking that was lost to the James River Equipment building, Love said.

Parking for the Rowan County Fair is usually $2, Love said. It is typically run by nonprofit groups that collect the money, he said.

Organizers of other events are able to charge patrons at their discretion, Love said.

By Mark Wineka mark.wineka@salisburypost.com SALISBURY — Mark Ridenhour is a self-professed Cheerwine fanatic, so Saturday — the date of the... read more