SALISBURY — Moving onward and upward from his role as principal at China Grove Middle School, Benjamin Crawford will next year take the top administrative spot at Carson High School. 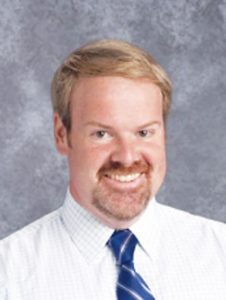 Crawford’s appointment was announced at Monday’s Rowan-Salisbury Board of Education meeting. The decision followed the March announcement that Principal Angelo DelliSanti will move to Kannapolis’ A.L. Brown High School next year.

School system spokeswoman Rita Foil said a total of 28 applications were received for the opening.

Superintendent Lynn Moody said Crawford will be a good match for Carson High School because he is a strong instructional leader.

She said China Grove Middle School has seen steady progress since Crawford joined its staff four years ago. The Charlotte resident came to Rowan-Salisbury Schools in 2015, when he was named the school’s principal.

Before that, he was an English teacher at A.L. Brown High School from 2002 to 2005 before working from 2005 to 2015 in a variety of roles in Charlotte-Mecklenburg Schools.

As principal of Carson, he will serve more than 1,200 students compared to China Grove Middle’s 520. But his work in Charlotte-Mecklenburg makes Carson far from the largest school he’s served. At Mallard Creek High, for example, enrollment was as high as 2,600.

He was also certified in advanced graduate studies in professional counseling in 2006 at Scranton, and was a North Carolina Principal Fellow in 2010.

“He has represent the southeast community as a principal of China Grove Middle and already spent a great deal of time working with the Carson community,” said Moody. “This seems to be a natural fit for him.

She added that Crawford will be able to see former China Grove students as they move through their high school careers at Carson.