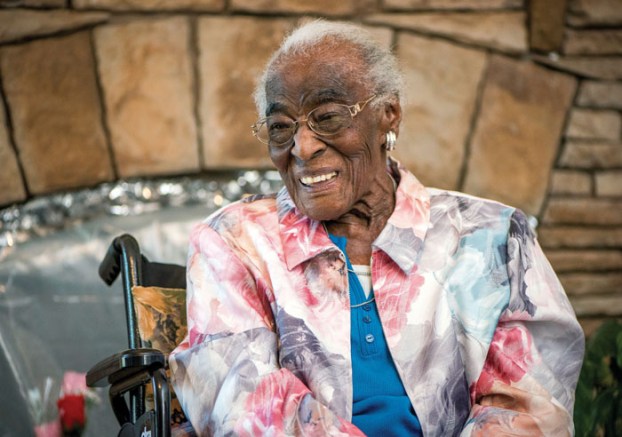 CLEVELAND — For as long as Ruth Bost Wood can remember, her family has called her “Babe.”

“Most people don’t know my real name,” she says.

Growing up, she was “Babe” to her nine siblings. She has been “Aunt Babe” and “Cousin Babe” to others in her extended family.

Some branches of her late husband William’s family prefer to go by “Woods” rather than “Wood.” So you could even call Ruth a Babe in the Woods or Babe Ruth, if you dare.

It just so happens “Babe” marked her 100th birthday Monday, and for the purposes of this celebratory story — and with Ruth’s permission — we’ll refer to her as “Babe” and feel like part of the family.

Babe Wood’s secrets to a long life are themes you often hear from other centenarians. She thinks her strong faith, work ethic, never smoking and never drinking have helped.

Her family members add something else — Babe’s loving, caring nature.

Though she never had children of her own, she raised or helped raise four in her family — Mary Ruth Bost; JoAnna Bost Fitzgerald; Mary Ruth’s daughter, Michelle; and a late nephew, Hardy “Peanut” White, whose family also provided good care for Aunt Babe in her later years.

Babe lived with and took care of her own mother, Roxie, until she died. Babe’s husband, William, who passed away in 1982, lived for years with kidney disease that had him tied to a dialysis machine. She was there for him, too.

Babe was the aunt who drove a car full of kids to vacation Bible school. She was the aunt you looked to for guidance on that first day you joined her in the choir at Knox Grove Baptist Church.

She was the sharp dresser. She made the greatest cakes and pies. You looked to Aunt Babe as an example for how to be a good person and treat people the right way.

Beverly Cuthbertson, a great-niece, says Aunt Babe always had “a meek and mild demeanor,” but the young people in her family learned a lot from her about using the proper voice and manners.

“She had a way of correcting you without beating you over the head,” Cuthbertson says. “She has been a heartfelt presence in our family — always the outside relative who has been an inside presence in our hearts.”

Babe says she just thanks the Lord “I was able to take care of all my people.”

Sitting in her living room off School Street, Babe notes she relies on a wheelchair for mobility now, after a couple of hip replacements in her 90s. She hasn’t driven in several years, but don’t think she’s not pulling her weight around the house.

Babe says she can still mop the kitchen, make her bed and straighten things up.

“Still, I can do things now faster than that child,” she says, referring to 78-year-old Mary Ruth and prompting some good laughs from all the visiting family members in the room.

The family held a surprise party for Babe this past Saturday. “The house was full, and there was plenty to eat,” Babe says. “Everything was beautiful.”

Relatives have been dropping by the School Street house a lot to see Aunt Babe. She enjoys the visits, which Wednesday included Cuthbertson, niece Cynthia Bost, niece Dorothy Scott, nephew Eddie Bost and great-nephew Jeff Bost, among others.

Of Henry and Roxie Bost’s 10 children, Babe was No. 8. She had two younger brothers. All her siblings have passed away.

The Bosts raised their children on a farm that grew corn and cotton. Babe hoed the cotton fields, milked the cows, tended the vegetable garden and looked after her brothers.

She attended school in Cleveland through the sixth grade. A cousin, Lottie McGee, arranged a domestic job for her, working for a preacher’s family in Barium Springs in Iredell County.

There, she learned to cook and clean in a big house down the hill from the pastor’s church.

Later, Babe took a job in Salisbury at Cartex Mill for about six months before going to work as a domestic for the family of the plant’s general manager,  Thomas W. Borland.

It began her 40 years of work for the Borlands, who had a home on Lake Drive, and Babe feels as though she helped raise their daughter and son. Tom Borland Jr. was a baby when she started working for the family.

“He used to call me his second mama,” Babe says. “He was a sweet boy.”

Babe and William married in the early 1940s. She traveled to work every day in Salisbury, then came home to a full night’s chores of cooking and cleaning and, in later years, taking care of her mother.

In her spare time, she attended Knox Grove Baptist, her home church since she was 12. She and William also found time on several occasions to drive or take the train to New York to visit with her brothers, Robert and Will, who had moved there.

Babe’s living room is full of family pictures, including some of her in younger days.

Babe’s favorite hymn includes the line, “When I did all I can do and I can’t do no more.”

A still robust Babe feels she has plenty of days ahead of her, but she says when her time comes, she’s ready, knowing she has done her best and the Lord has prepared her.

“I’ve had good health and I’ve been able to take care of my family,” she adds.

Babe has knocked her first 100 years out of the park.

SALISBURY — This story begins with a wine-and-cheese social held last Thursday on Lake Drive. But if you think the... read more