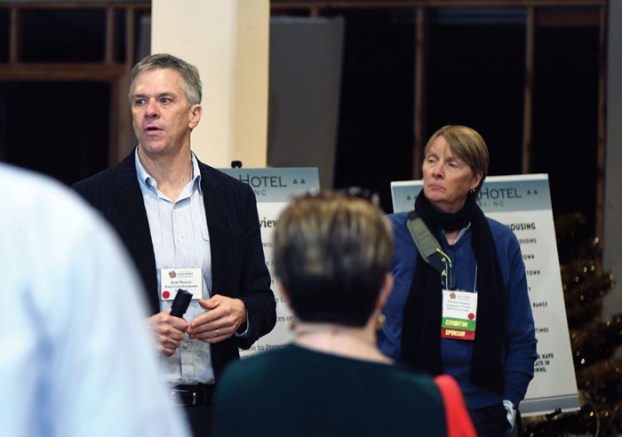 The Empire Hotel is, by far, the most challenging project Britt Weaver has worked on. And once complete, Weaver says it will be his second-biggest business accomplishment.

Weaver, principal of Black Point Investment and developer of the Empire Hotel, gave an update on the progress of the project Friday to the Kiwanis Club of Salisbury. And when I heard the Empire Hotel would rank No. 2, naturally, I wondered, “What’s No. 1?”

The answer involves raising $25 million for a project at about the time that the Great Recession began to take hold. Weaver, then working for a company named Sencera, said the fundraising effort occurred in three rounds.

“That one, I’ll never be able to touch it because there was no money at the time, and I just hit the right people at the right time with an interesting project, but it was a very high risk technology,” Weaver said.

That interesting project and high-risk technology was a solar module factory in west Charlotte, Weaver said.

A news release about the project dated July 7, 2008 said Sencera planned to invest a total of $36.8 million and create 65 high-paying jobs — an average wage of $73,462, not including benefits. In the news release, Weaver was quoted as saying Sencera considered “several different states and foreign countries.”

The challenge facing Weaver this time is much different.

He plans to turn the historic hotel into apartments and retail space. The former Montgomery Ward space must be commercial space, he said. Other ground-floor storefronts facing South Main Street will be designated live-work space, allowing for either apartments or commercial.

But this is not the first time the Empire Hotel has been the subject of redevelopment talks, and it’s been years since the most recent redevelopment was announced. Weaver firmly grasps that history and notes that some in Salisbury may be asking “what’s so complicated about this” after previous proposals haven’t panned out.

“I fell like Dorothy because we know where we want to go. I want to go to the wizard of (Housing and Urban Development), Ben Carson, right, and I’ve got this yellow road, but I can’t see where it goes.”

Weaver hopes to receive federal and state tax credits, which will bring about $5 million into the deal, as well as a local property tax abatement, which would require the hotel to maintain its historic status in return for a cut in its tax bill.

“That’s very important because when our underwriters look at a deal they’re looking at your future expenses, including your taxes,” he said. “If they’re are 100 percent taxes like a normal building, it won’t work.”

The good news is that Weaver is confident and committed.

His confidence is buoyed by the fact that open downtown apartments are few and far between, that there’s ample demand and recent economic development news that Chewy.com plans to bring more than 1,200 jobs to Rowan County as it builds a fulfillment center.

That the economy is humming at a healthy clip has its drawbacks, too. For the Empire project, a healthy economy means sharply increased prices. On Friday, for example, Weaver said the cost of labor had increased by 20% since 2016, when his group began working on the Empire redevelopment.

He used the 10-year treasury rate, an interest rate that’s valuable in looking at the U.S. economy, as another example of how things have changed. Late last year, the rate had risen to the point that redevelopment of the Empire Hotel “absolutely made no sense,” he said.

Since then, the rate has dipped, and  the “momentum is the right way,” he said. The rate was 2.46% late Friday compared to 1.6% at the time the project was announced and more than 3 percent in late 2018.

So, when will Weaver finally finished the proposed redevelopment? To some extent, that answer relies on the speed at which government moves.

Weaver said he plans to submit the project’s underwriting to HUD this summer. The goal, he said, is to start construction this year.

“It’s all a function of how this goes through HUD, but with every challenge to date we’ve met the obstacle,” he said. “So, I’m pretty confident that we’ll do it again.”

Once it starts, construction could take up to 18 months, he said.