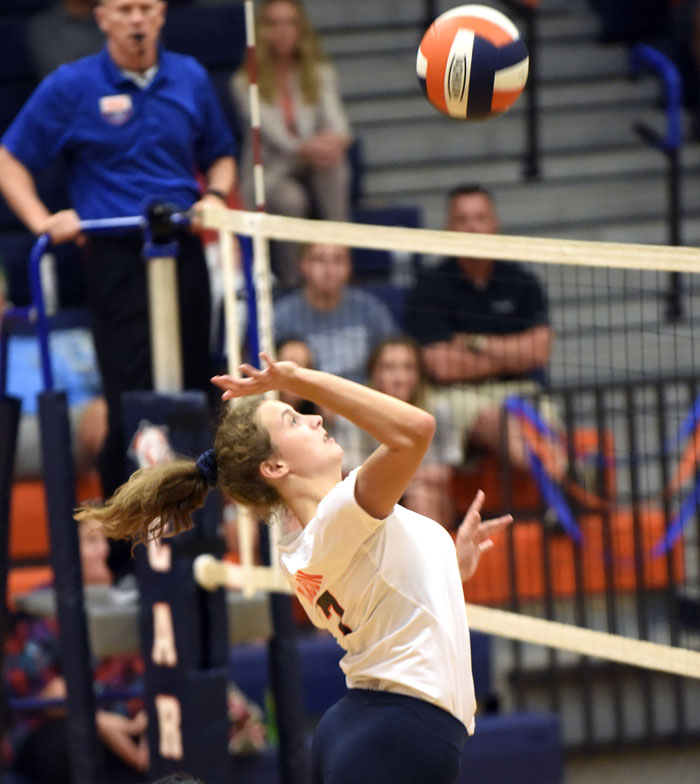 Wayne Hinshaw file photo/for the Salisbury Post ... Carson’s Nancy Gamewell goes up on attack during a volleyball match last season against West Rowan. Gamewell has announced that she will continue her education and volleyball career at William Peace University in Raleigh.

CHINA GROVE — Born into a family of staunch N.C. State fans, it’s fitting that former South Rowan athlete Nicole Barringer wound up in Raleigh at William Peace University where her many duties include serving as head coach of the women’s volleyball team.

Barringer had heard plenty of good things about Carson’s Nancy Gamewell. But her recruiting trip to see Gamewell got off to an awkward beginning. Gamewell’s mother, Lu, a former track and field athlete for the Tar Heels, was sporting a UNC T-shirt, as she often does.

“You need to lose that shirt,” Barringer joked.

“That’s where I went to school,” Gamewell answered.

“I guess I just lost a recruit,” Barringer said.

But she didn’t. It didn’t take long for Barringer and all the Gamewells to realize that college rooting allegiances aside they had plenty in common. They talked about Rowan County and about volleyball, things they both love. Nancy, an all-county middle for Carson as a senior, is headed to William Peace in the fall.

“When I visited there, I just really liked the family atmosphere and I was very comfortable with Coach Barringer,” Nancy said. “It felt like home.”

Gamewell got a late start in volleyball, getting involved for the first time in the eighth grade. Before that, it had been mostly basketball for her because she’s relatively tall at 5-foot-9.

“Volleyball was a sport that my friends were playing,” Gamewell said. “So, I wanted to try it.”

Carson always has strong volleyball teams. Players develop in the program, sometimes for years, until it’s their turn to shine. Gamewell was a jayvee for two seasons. As a junior, she got her first chance to impact the varsity team, and she contributed.

The jump came for her between her junior and senior seasons. She made the leap from pretty good to really good.

“I’d started to think that I’d like to play volleyball in college,” Gamewell said. “I had coaches that pushed me and prepared me well and I got to play with a great group of girls, but I still wasn’t sure if I’d be good enough to play in college.”

As a senior, she became a huge factor for the Cougars in the middle. She led a 26-4 team in blocks and was third in kills behind stars Mallory Weast and Jaden Vaughn. Gamewell more than tripled her totals for kills and blocks from her junior season.

“She’s a player who kept getting better and better,” Carson coach Kelan Rogers said. “She got a lot of blocks and she was getting more kills as the season went on. We’re excited about her future.”

Barringer liked what she saw.

“Nancy is smart and she has good footwork,” Barringer said. “She made that tough transition from outside hitter to middle, and when you can do that successfully, it shows that you have a lot of athletic ability. Most of the top middles in our league aren’t any taller than Nancy  — they’re just very good athletes. We believe she can be really good for us.”

Gamewell is a versatile athlete who combines perseverance with good strength and explosiveness. She was a reserve on Carson’s strong basketball squad and helped Carson win county and conference championships in track and field in with her throws. She placed second in the Rowan County Championships and the North Piedmont Conference Championships in the discus.

She’ll be joining a successful college program. Barringer, who starred at Averett University and was an assistant coach at Catawba, guided William Peace to a 24-6 record last fall.

A key part of William Peace’s success was freshman Madison Myers, who played against Gamewell when she was at West Rowan. Myers showed Gamewell around when she visited the WPU campus.

“Madi played all over the place for us,” Barringer said. “We were thrilled with her freshmen year and now we’re excited about adding another player from Rowan County.”

Academically, Gamewell’s strength is science. Her favorite class at Carson was Forensic Science. She’ll probably major in biology or chemistry at William Peace.