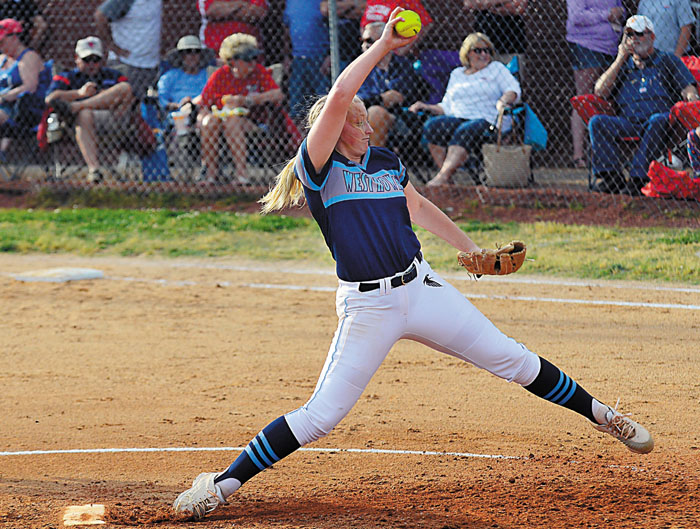 West Rowan’s 10-2 romp against Rockingham County in the second round of the 3A softball state playoffs on Friday may have been pitcher Whitley Arnott’s most forceful game in a dominating season.

“Her fastball was heavy tonight, coming out of her hand just right, and it was cutting,” West coach Jimmy Greene said. “Her last two games (the North Piedmont Conference Tournament championship game and the first round of the playoffs against Sun Valley) she threw the most pitches and had the most walks she’s had all year. But she was back in control on a very emotional night for all of us.”

Senior third baseman Hannah Roberts and her father, assistant coach Jimmy Roberts, were in West Virginia for a funeral. Hannah’s grandfather, Willis Gene Lester, may have been her biggest fan. He passed away on Sunday at 73.

“I texted Hannah today and told her I’d do everything in my power to see that we’d get to the third round so she could be back with us,” Arnott said. “We’re close. I told her I was playing this one for her.  Our whole team was.”

The third-seeded Falcons (22-3)  have achieved the program’s highest total of wins since 2006 and are in the third round for the first time since the 2005 club charged to the Final Four in Raleigh and finished as 3A runner-up.

“It’s  not easy to get to the third round,” Greene said. “We expected a battle tonight. That was a good team we were playing from one of the toughest conferences and they had a legit pitcher, but Whitley was at the top of her game.”

Things did not start smoothly for West against 19th-seeded Rockingham County (14-8). Arnott was nicked for a quick run in the top of the first on solid hits by Jenna Washburn and Amari Broughton, the only two batters who gave her problems.

Then West had a deflating bottom of the first, leaving the bases loaded when second baseman Madison Courts made a diving catch in short right and robbed KK Dowling of a two-run single.

“But we weren’t that worried about 1-0,” West catcher Megyn Spicer said. “We’ve been in much bigger holes and we’ve got an offense that can put up a lot of runs.”

The turning point was the top of the second. Arnott struck out three straight hitters in about a minute, just rammed it by the 6-7-8 hitters with fastballs. Rockingham County pitcher Taylor Smith barely got to sit down to catch her breath, and she was headed right back to the circle.

“Whitley was hitting corners tonight,” West catcher Megyn Spicer said. “She wasn’t just throwing hard. She was putting it where she needed it to go.”

It looked like West might fail to score again in the bottom of the second when lead-off hitter Kenadi Sproul bounced to third baseman Broughton for what appeared to be a routine third out, but Sproul scooted down the line quickly. Her speed forced an errant throw. Spicer, who had walked, was able to race home, and it was 1-1.

That error also gave Mary Sobataka a chance to hit. Sobataka smashed a screamer past the right-field scoreboard to put West in front 3-1. That was the single biggest swing.

The homer was Sobataka’s eighth of the season and her fourth in West’s last five games. The Coastal Carolina signee has gotten red-hot at the optimum time for the Falcons.

“Their pitcher was very good, good velocity, and wasn’t missing many spots,” Sobataka said. “She got me to pop up my first at-bat, but I was looking for a pitch away my second time up and that’s what I got. We had Sproul in scoring position, so I was just trying to hit it hard somewhere to get her in.”

That’s when homers usually happen.  Few homers are hit when people are trying to lift one out of the park.

Arnott went back to the circle with that 3-1 lead in the third. She allowed a double to Washburn, but she struck out the side.

West added two runs in the third to make it 5-1. Doubles by Dowling and Spicer to the gaps were the key blows. With a four-run lead and the way Arnott was firing, it was all but over.

Rockingham County cut the gap to 5-2 in the top of the fourth, but West got that run right back in the bottom half.

West blew it open with a four-run fifth. Hits by Spicer and Caylie Keller started the inning. Sobataka walked with the bases loaded to make it 7-2. Taylor Walton’s RBI single made it 8-2. A wild pitch plated a run before Reagan Haggas got the final run in with a wobbly infield hit.

“We made good adjustments at the plate,” Spicer said. “Everyone shortened up on their swing a little bit to hit that pitcher.”

Arnott never let up. She struck out three more in the sixth, and then another three in the seventh to end it.

Then West’s players and coaches gathered to communicate via FaceTime with the Roberts family. There was a third-round game to come home to.

“We got behind early on a few unlucky things, but we didn’t let it get in our heads,” Arnott said. “We were going to win this one for Hannah.”

“We missed Hannah and we missed her dad, but we knew we had girls who could step in,” he said. “Caylie Keller (who normally doesn’t bat) gave us good at-bats all night and Taylor Poole played third base without fear. She had to make some hard tags.”

The next challenge for West will be 11th-seeded Parkwood (14-6)  in a third-round game scheduled to be played in Mount Ulla on Tuesday. Parkwood mauled defending 3A champ Alexander Central, the No. 6 seed, on Thursday, 14-1. The Parkwood-West Rowan winner will tangle with the Central Cabarrus-A.L. Brown winner in Round 4.

“Parkwood will be good, but everyone in the third round is good,” Greene said. “It’s so hard to get there.”